ThistlewickVII wrote: If they have no frame of reference, they might not understand the game. It's about overcoming misconceptions, that these girls are people and legitimate love interests.

If they have nothing to overcome, what does the game become?
A game about a crazy guy who wears a leaf when he showers and drinks on the school roof?

"I don't get these games from the Classical Pre-NeuralNet period at all, guys. Why doesn't that Lilly chick just get prosthetic eyes? Didn't Japan have vending machines?!"

In all seriousness, I tend to agree that KS's influence in the long term is going to be pretty limited. I part because it's a VN and has to drag all that baggage behind it, and also because the idea of people with disabilities being people first is so weird to a lot of people. Could it have some staying power in actual disability communities? Has anyone gotten into contact with any such groups?
Hanako's favorite joke is The Aristocrats, but she never tells it because Lilly finds it really offensive. Instead, she practices her delivery in front of a mirror when she's alone. It's the only time she never stammers.
Top 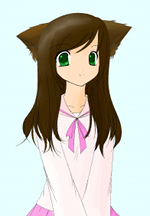 ThistlewickVII wrote:I was posting on a topic about forgetting KS to play it again,
And said that in 50 years I Might have forgotten some of it, so then I could Play it again,
And that I'd leave it in my will that everyone should play it.

And this got me thinking, what will this game say about our Generation when people look back at 2012?
Will the game lose some of it's impact when it is written in Archaic Text (as it will be to them)?
People won't know about mobile phones or music-boxes or

maybe there won't even be disabilities as technology and surgery improve.
I know the game is about "irrelevant of disabilities, not despite or because", but would the game still work?

You're kind of exaggerating. Try reading a book, watching a movie, or something else from the 60s. Sure there's change, but we're not flying around in rocket cars and neither will we in 50 years. <== Metaphor

One of my hobbies is coloring anime style linearts. My avatar is the first lineart I've colored.
http://tununias.deviantart.com/
Top

If current shadows remain unaltered, it will be to entertainment media what Beta was to VHS, or what cylinders were to phonograph records. Brilliant, but it will die because producers don't think it worth the cost for such a fine product.

It must have cost you guys a fair amount of time and money to make this game, and I'd say it's pretty brilliant. But capitalism generally dictates making as good of a product as possible as cheaply as possible and selling it for a price people think is reasonable. It need not be so. But it would take a lot of work for quality work like this to become anything like mainstream. And even then, it would probably be considered what limousines and HEMIs are to compact cars - best left to those of the higher fiscal echelons of society. You gather what I mean?
I'm weary of the railway,
Poor Paddy works on the railway.

"Will she remember me 50 years later? I wish I could save her in some sort of time machine"
Top

This is actually a much deeper question than it may first seem... But in regards to KS in 50 years I have one thing, will it still have the same impact it did, and still does have. I believe the sole reason that KS is such a superpower is that the Internet is a very harsh and cold place in general and KS had a bigger impact on us because it was such an oddity. But will it have the same impact when we've grown up? Teenagers like me will have gotten jobs, probably partners, Mabey even children so the Internet and things on it will be less important. And if I had those things would I still be as affected b it as I am?

Only time can tell...

But throughout the 80 or so years I plan to kick around on this planet, Lilly, will always have a special little spot in my heart.
Top

Heh, another way to look at the thread title would be a sequel set in 2062, and Hisao's first day at a retirement home, after his heart finally forces him into assisted living. A divorcee for 10 years, he dons his old sweater vest and is ready to make a move again

His big surprise is that the gang is all here! Lilly is spiking her O2 tank with a little nitrous, Hanako shuffles along looking for dark tiles in the rec room, Shizune has taken over the place with control of the vitamins and suppliments, Misha continues to shock with her grey drills and 5 alarm voice, Rin freaks out the rest of the residents (at least those almost at death's door) with her morbid art and manly attire, and Emi keeps bullying the people with walkers to do "just one more lap".

So for all those demanding a sequel, be careful for what you wish for.
Hanako>Shizune>Lilly>Emi>Rin {100% complete}

Enemy | wrote:"Will she remember me 50 years later? I wish I could save her in some sort of time machine"

This is probably the only piece of media that's given me as many feels as KS.

"In my dreams you're alive and you're crying" gets me every time.
Top
Post Reply
22 posts