A forum for general discussion of the game: Open to all punters
Post Reply
57 posts

It's noted during her h-scene that sex itself is rather painful and unpleasant for her due to her scarring. So I doubt she's going to be super eager to get physical, even after she and Hisao have confessed to each other properly. On the other hand, there are other positions aside from awkward-missionary-without-stockings-taken-off-properly that might be more pleasurable for her...

Great, now I just realized that the devs were pretty damn good at their job if they made me want to look away during Hanako's h-scene, thus making me miss info like this. *starts game over again*

).
That guy who writes too many crossovers.
Running Interference, a tale of Hisao and another purple-eyed girl.
My One-Shot Depository full of random stories 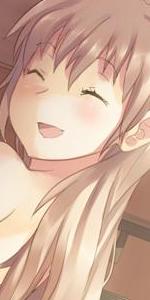 Actually, Hanako was in pain due to it being her first time and Hisao being clumsy and she did'nt do it for herself, she did it to get more intimate with Hisao (which is why she was'nt satisfied about it) thinking it would stop him from being a white knight and it turned out to be a bad decision (thus, the awkwardness after) which helped him realize later thats how he was towards her and he figured that out in the park scene where they confessed.
Favorite Routes:
Emi
Lilly
Hanako
Top

Autopsy wrote:Actually, Hanako was in pain due to it being her first time and Hisao being clumsy and she did'nt do it for herself


Katawa Shoujo wrote:For Hanako's part, the look of pain doesn't really seem to be dissipating as I'd hoped. Her scar tissue causes one side of her body to move a little differently from the other, and strands of her hair are by now sticking to her face.

I guess it's not really explicit that the scarring itself is painful; the pain could just be due to her virginity and/or awkward position, with the scarring noted only as a curiosity. Regardless of any of that, Hanako seems like she'd have a pretty reserved libido in the first place. Then again, so does Lilly, and we all know about her healthy adolescent sex drive...
Katawa Shoujo OST Transcriptions and Arrangements: Consolidated list

Mysterious Stranger wrote:and lastly (but certainly not least), Hanako's crayon drawing of herself crying with her house on fire.

Fuck, that last one can make me cry on cue. Cry! I command it! Shizune in a yukata or Rin and Hisao under an umbrella.
Top

I'm actually rather fond of this one: http://shimmie.katawa-shoujo.com/image/2390.jpg
Had it as my phone background for awhile. When any calendar alert would pop up along the bottom it was as though Shizune was reminding me herself. [Hey! Exercise time!], [Take your medicine!], [Don't be late!] etc.

I also REALLY like this one: http://shimmie.katawa-shoujo.com/image/1819.png (NSFW Warning!) for reasons I can't explain... Ok, i can easily explain them. it's Hot Naked Catgirl Shizune! What else could you ever want? Still trying to figure out why Hanako and not Misha or Hisao is holding her leash though. Seems like Shizune would be the more likely one to be leashing Hanako... Hmm... Now that's an interesting mental ima...HNNNNNNNNNNNNNGH! *thud*
Hisao: You want to know who I am? I'm the boy with the broken heart.
Top

kyouriharu wrote:Shizune in a yukata or Rin and Hisao under an umbrella.

Shizune in Yukata just feels so 'right'. I don't know, it makes me all fluffy inside

Megumeru wrote: Shizune in Yukata just feels so 'right'. I don't know, it makes me all fluffy inside

I'd say Shizune in a yukata seems completely out of character for her. But that's what makes it so cute.
Katawa Shoujo OST Transcriptions and Arrangements: Consolidated list

Akira sitting on a bench, I don't know why, the moment wasn't the most hurtful or happiest moment but it just was beautiful

Chekchie wrote:Akira sitting on a bench, I don't know why, the moment wasn't the most hurtful or happiest moment but it just was beautiful

I agree, something about that photo...just worked.