Help With Getting Over the Game

A forum for general discussion of the game: Open to all punters
Post Reply
53 posts

Well said shoes, well said.
"OH GAWD MY DRILLS"
...What? Not a real quote? Oh well, it's Yipyapper's quote now.
"Google will rule the world soon. Accept them now before it's too late."
~Yipyapper
Top

Well after i beat Emi's path (my 1st playthrough) i got quite alot of feels, but after i beat Rin's (my 2nd) i got the most intense feels. I think that was because i had something pretty bad happen relationship wise happen right in the middle of that route, and that route felt super emotional and it made what was happend feel worse. I got over all that though by doing other stuff, playing new video games, hanging with friends and just forcing what happened out of my mind, telling myself it wasnt going to bother me and just move on.

Plaing other playthroughs helped too, i did Shizune, Hanako and then Lilly. I still got plenty of feels from that but it helped me move on. I havent forgotten about Katawa Shoujo though. When i am at work or before i fall asleep i tend to imagine new storylines in the universe, usually putting my own imagined character in, usually based a bit off myself a bit but tailored to fit into the universe. I tend to do that with alot of fictional properties when i am bored or have alot of time to think, its somewhat of a habit and people have told me when i am working it looks like i am kind of in my own little world, but its not a big deal since i can snap out of it instantly.

I'm not sure I've moved on at all myself. And this forum is really weird considering it is a game forum that discourages players to think about the game and helps players "get over it".
I am a guy.
I sometimes talk like Rin Tezuka.
I am in love with Hanako Ikezawa.

Follow-up on my situation:

Following the depressive mood I began to feel after playing Rin's and Lilly's story lines, I began to drink myself to sleep each night, waking up the next day perfectly fine due to the nice sleep alcohol provides for me (occasionally I get a hangover whenever I drink my bourbon).

Rin and Lilly's story lines brought up some memories that I've been bottling up for quite some time, for about 6-10 years. All these bottled feelings affected me and turned me into the sociopathic, cynical asshole that I was pretending to be to hide and mask it. As I was talking to one of my close and dearest friends, she brought up a final trigger, and I ended up having a mental breakdown. Lots of manly tears were had. And then womenly tears. And then baby tears. More alcohol ensued. I woke up the next morning angry and with a hangover, not at my friend (bless her heart) but at myself for having these memories and bitching about it. I called up the bitches who caused me the pain, since it really was their fault and not mine, as I was forcing myself to believe since I was the sensitive wuss I am no longer, and then I asked to see them individually in public. Then I snapped at them in public, not giving a shit how they thought of me anymore or how they reacted. I think one of them was tearing when I was done and left, but really she deserved it. Just today, I began to play KS again, and this time I finished Hanako's good ending.

My god, the feeling I got from this ending was epic. That last CG was amazing. Simply put, I had a FUCK YEAH moment. My confidence was regained, and I'm able to start holding up decent conversations with people again. Simply put, I am no longer depressed (or not as severely depressed as I was during my OP).

This game makes me wonder:
How the fuck?

Did the writers specialize in a special mind manipulation type of writing that makes the game unique, allowing one to quickly feel depressed one minute, and then quickly feeling jovial the next?

I'm at a loss of words. Somewhat proud of myself. Like a load of shit has been removed from my back. Yea, that sums everything up. After playing this game, I am at a loss for lack of a better way to describe this game.
Top

From what I know, the writer's did purposely put things into the story to evoke certain emotions. Nothing wrong with that, you get more immersed into the story that way.
Meh, I just liked how the location sounded in my mind. I'm not really into sailing myself.
Top 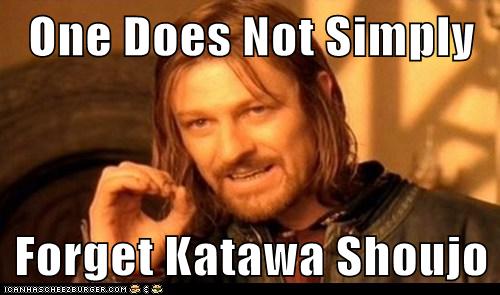 But in all seriousness, I was hit pretty hard, especially after playing Hanako's storyline but its more like trying to learn from the experience rather than.... i'm having a Rin moment right now.... damn


haha, nice. So true. SHUTUP ARAGORN, IT IS.

Wait... what about a catapult?

What if we HURL our feels INTO Katawa Shoujo?
Top

hickwarrior wrote:From what I know, the writer's did purposely put things into the story to evoke certain emotions. Nothing wrong with that, you get more immersed into the story that way.

Lots of games attempt this, KS was successful. Very successful with the posts I see every day here.
"OH GAWD MY DRILLS"
...What? Not a real quote? Oh well, it's Yipyapper's quote now.
"Google will rule the world soon. Accept them now before it's too late."
~Yipyapper
Top

hickwarrior wrote:From what I know, the writer's did purposely put things into the story to evoke certain emotions. Nothing wrong with that, you get more immersed into the story that way.

Exacta. Emotionally pulling the fans is the aim and KS did it perfectly.
Top
Post Reply
53 posts