Flammz wrote:What's up with people calling Emi a "slut"?? Just because she had a boyfriend before? Silly.

yeah, some people just can't handle a girl actually *GASP!* liking sex and having more than one boyfriend in her life. pretty sad.

the phrase I've heard is "owns her sexuality", and even though I saw it when someone was talking about a woman in Mass Effect (don't remember which one), it works for Emi too.

I hate it when sex is portrayed as such a bad or shameful or whatever else negative thing. thing is, that's part of why I liked Emi's path so much, she wasn't shy about all that. hell, of all the girls, Hanako is the only one who doesn't directly initiate sexytimes, and even then, her one sex scene... yeah. So why's it Emi who gets called names, hmmmm?

If i had to hazard a guess on that one, I'd have to say Miranda from ME2
Top

I skimmed through the post thinking that you were writing down your thoughts for the entire route and then hit this bombshell.

Please don't do this for each act.

Sorry >.<
Those were kinda my thoughts per act.

I guess I should sumerize how I felt about the whole Emi route.

It's the only route I've played, and the only route I'll ever play. What pretty much got me through it was Emi's sense of humor and....I don't know, her 'cute' way of doing stuff. I really liked the running analogy and the cemetry scene, although the shed scene was a bit weird.
Also, I like how they penned Emi to be not stupid and see through the character's tricks.
My KS tribute video to Emi: http://www.youtube.com/watch?v=MO3ETgqrV0c
Top

I agree - probably this one bad ending scene is the one that ACTUALLY provoked me into becoming emotional...

the worst part in order to get the good ending?

imperial.standard wrote:the worst part in order to get the good ending?

Do you know that there's a way to get the good ending without having Misha involved?
Top

Prospektor wrote: Do you know that there's a way to get the good ending without having Misha involved?

I know but my first route with Emi presented me with that option. Aaaand straight I went to the bad end

I agree - probably this one bad ending scene is the one that ACTUALLY provoked me into becoming emotional...

the worst part in order to get the good ending?

I actually liked that; I thought it was a nice touch, especially if you've played Shizune's route, to understand where Misha is coming from.
Top

Ok, after a day to digest things, here are some of my thought on the Route (again).

First about the issue about Emi being 'too easy' sexually or teh fact that she had sex before (yeah, I am totally going there!).
This just wrong. So the girl knows what she wants, has experience, is confident about her sexuality and believes (imho) that sex is an important part of a healthy romantic relationship. So what?
I mean, come one. Both of them are young, their hormone levels are throught he roof and they are both horny. Stuff happens and both are happy (until shit hits the fan). Hisao is one lucky bastard to have someone who knows what she's doing and can teach him a thing or two (or three or four or...).
Yeah, sure there is the issue about her also using sex to dodge the subject but that doesn't make her a slut or anything like that.

[edit]
And hey, Hisao wasn't bothered by it and I recon most of the people playing the game are older than he is. So go suck it up and be a proper adult.
[/edit]

Makes a lot sense to me but still... the scene feels kinda forced.

About the two ways to the good ending:
Made a save before the choice and played through both ways. I must say, the 'wrong' choice (Go after her) feels more fleshed out than the 'right' one (talk to her mother). That being said, I like Hisao's speeches from both paths. It really shows how much he cares for Emi and that he will stop at nothing to help her (help herself). If that darned Mountain is in the way, then fuck that mountain, he will make it GONE! WITH SCIENCE!
You hear me mountain?! You are going down!

The good ending: Loved it. Makes me feel happy everytime I think about it.

The bad ending: Didn't get that one and I am not sure whether or not I would be able to stomach it. So for now, I wont try it out.

So far, I prefer Rin's route over Emi's route. Emi's route was good. With a capital... GOOD! She's a sweet girl and being with her is definitely good for Hisao.
But as I said before, it didn't manage to grip me and keep me glued to the screen like Rin's route did. That emotional rollercoaster with Rin was like nothing I ever experienced before and left me incredibly happy but also extremely drained and exhausted when the credits rolled.

I think that it was probably too soon to start another route. Will be more clever this time and wait till I go for Shizune. Get my head sorted out, digest everything. Because, I'll be honest: Seeing Rin only as a secondary character in this Route hurt. A lot. Funny how this VN can make you feel this way...

I'd like to suggest to leave that topic alone. I've seen other threads here trolled to death (they've been closed) on that matter.

My bad, didn't know. Did not intend to evoke any trolling on the matter, just read it here and there and didn't understand.
Top

Maybe she had a band-aid or bandage

Not that Emi would care, like she kept running anyway even when it hurt.
Top

I was wondering if I was the only person who questioned those events.
Top 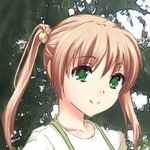 A fleeting thought: It's quite appropriate how most people end up on Emi's route first by making natural choices. That attitude of taking things as they come and seeing where they lead you couldn't be more appropriate for her route.
Top

I've posted a review of Emi's path in my feedback, but it will be easier to discuss with you all by copying it here:

I started with Emi's path, being the one that had had sneaked upon me on my first play of the demo, I wanted to continue that first play up to it's natural end.
I'm glad I did. I love that path, how it is light-hearted but not silly, nor devoid of seriousness for the characters themselves. The H-scenes were well handled, realistic, funny, heart-warming. I think Hisao could have guessed that Emi's dad was dead. I did a long time before the reveal. I think he actually did, I didn't read surprise at the reveal, but I would have liked for the text to make it clearer.
I also liked how the choices gave you a second chance toward a good ending, like Misha having you apologize, which bails out the relationship, after Emi ejected you from her house. It helped counteract Hisao's overreacting/white-knighting tendencies (and actually helped me get the good ending on my first run).
Oh, and I got a good laugh at Kenji's reference to making someone fall from the roof look like an accident!
A very nice path. Beginning with it might have been what gave me the impetus to want to read all the rest and aim for 100% completion – although I'd have played Rin anyway.


urishima wrote:I think that it was probably too soon to start another route. Will be more clever this time and wait till I go for Shizune. Get my head sorted out, digest everything. Because, I'll be honest: Seeing Rin only as a secondary character in this Route hurt. A lot. Funny how this VN can make you feel this way...

You're not the only one with this. I felt glad I had taken Emi's path before Rin.
99% completion.
Mind-worm meter: Rin>>Emi>Lily>Hanako>>Shizune
Fanfic: The lamb and the fox
Top

*skips 12 pages* I'll read them later...
Since I got Emi's route first in the demo, I did her's first in the full. I have to say, Hisao shows an admirable amount of restraint. Had it actually been me there, there are several places where I would have put my fist through a wall (knowing my luck I'd hit a stud and break my hand, but that's beside the point). As I got closer and closer to the bad end, I fully expected him to run himself to death in a fit of grief and fury. ...I thought I had more to say, but I forgot what it was, so I guess that's in then.
Top
Post Reply
291 posts