I need some help here guys, some other people opinion and past experiences. This forum board appears to be a good community and I feel I can openly express myself here.

I'd never played a bishojo-style visual novel (please excuse me if I'm using the wrong lingo here =p) game before, although being a fan of anime I had always wanted to try on out. I downloaded Katawa Shoujo out of curiosity due to hype it had been creating.
I played it and loved it.

I found myself being heavily drawn into the characters and plot and to some degree wrapping my own emotions up into the game. Although I have done this before in other games, it was different this time due to the fact the games driven heavily on relationships, I feel I got to emotional involved in the game sometimes to the extent of blurring the line between fantasy and reality.

The concept was strange and unknown to me and I'm just curious how other people feel playing this types of games so hazily emotion driven.
Be kind please guys, I'm just looking for some honest opinion here, don't by shy I opened up =P.
Top 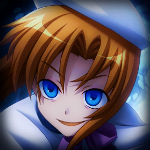 Don't worry now, alright? It actually will pass. It will. What has happened is that you probably feel like these characters are your friends now, hmm? You feel that you know them. You want to see what happens next for them.

Be happy that this was such a deep adventure for you. Be happy about the fact that it was a good experience.

I do know exactly how you feel, it's the same (even now) for me with this "game". But it will pass, which is a good thing. Because what's left will be an extremely good memory, something that you can then remember and say "That was something else alright." to.

... Well it sure made me feel better by writing this...
VNDB: http://vndb.org/u34290
MAL: http://myanimelist.net/profile/Harlequina
EG: http://erogegames.com/members/harlequin/
Top

If you browse the discussions for the different paths or some other reaction threads, I believe you'll find you're most definitely not unusual. People are taking this game in all sorts of different ways. Some people are taking it pretty rough. It's amazing to see a game do that, and also to see so many people talking so honestly about how it affected them. I really feel like we were all just waiting for something to come along and pry open our shells so we could spill our guts to total strangers on an internet message board.

We'll all move on eventually, but we'll have this weird communal cathartic experience to look back on. Maybe a few new friends, too.
Top

It's fine
This visual novel was created for a good reason yes?
Not only for us to be entertained but also give us something to remember with when we return to our lives

Appreciate your time now so your memory will be much greater.

Thanks guys, I think a part of me already knew that it was ok, I just needed some reassurance. This game is crafted so well, no wonder it was in development for so long, there is so much love in this game.

Thanx for the helping words, I really appreciate it
Top

Well I don't really think it's healthy to blur the line between reality and fantasy. Maybe you're reading too much at once; you need to be able to disconnect and take care of yourself, and other things like that. I probably wear my heart on my sleeve, too, but I don't get so attached to any media so that it can hurt me psychologically. Take care.
X is scientifically proven to Y.
Top

As for being affected emotionally, I'm not sure if it's really a first-time thing - more a sign of brilliant writing and composition. KS wasn't my first, and immediately after playing Hanako's Act 1 route I felt like she was my best friend. I felt a similar way about Shizune when I played hers. I think even visual novel veterans were moved by KS in that it affected them - you're not alone there. However if you find you're blurring the lines a bit, take a break from the game. Due to the nature of most of the routes it's a lot to take in all at once.
Top

[quote="Guest"]As for being affected emotionally, I'm not sure if it's really a first-time thing - more a sign of brilliant writing and composition.

I think you may be right there, as for 'blurring the lines" I think that may have been a bit of an execration on my half, perhaps not the best words to use to voice my concern. I've always been one of those types to easily slip into fantasy but I know my limits, how to keep it healthy, I think I just went past them this time, but thank you none the less.
Top

I'm in a similar boat in that this is my first VN as well - I also hadn't considered them before but was interested by the hype surrounding KS and downloaded it on impulse.

However, I come from a gamer background and saw this as a game, choose your own ending etc, a fact supported by Act 1. However after reading Emi's arc (and especially Shizune's arc) it reminded me that this is a visual novel. Playiing a RPG I wouldn't expect to be drawn in that much by the characters because the mechanics of the game prevent you from becoming too immersed by them.
Reading a book about a teenage love story... I would expect to be immersed a lot more. And am.
Routes played: Emi (10/10), Shizune (6/10), Lilly (9/10), Hanako (9/10), Rin (7.5/10)
Emi > Hanako = Lilly > Rin > Shizune
"As long as you're still alive, you can keep going." ~ Emi

Althamus wrote:
However, I come from a gamer background and saw this as a game, choose your own ending etc, a fact supported by Act 1.

So did I, but then started to see it more as a interactive novel, maybe thats why it got to me more, then say a heavily story driven RPG
Top

This is a VN, and one of the better written ones at that. Some level of emotional attachment to the characters is pretty standard, as is being hit hard by the more dramatic/romantic scenes. Indeed, in most literature the author would feel like they'd done a bad job if people weren't affected emotionally: this game is no different. Even some minor crushing on a character isn't uncommon, again like with any good writing.

If you find yourself starting to feel as though you're actually in love with one of the characters, then you're in too deep. It has happened, with this game and with others, and that's a case where you need to take a break and get yourself some distance. If you're really blurring the line, then you should watch yourself, but the fact that you're aware something is happening and are concerned about it is a good sign. For now I'd say to just be careful, and know when to step back for a bit.
Top

Welcome to the club. Glad if you like being here, and I'm sure almost every people who loves to play VN and such also loves to share about their game experiences and what they felt about the game

In my opinion, everyone felt that due to this story is a character-driven story, not story-driven.
Let's see, we got a long dialogues and narration (in this case, monologue). There were not many actual "plot" happened in the story, and plot twists are something even more rare. And then why it's counted as good? That's simply because it's character driven.

By being character driven, the most important things are :
1. How interesting the characters (by design, behavior, personality, etc)?
2. How good the writings get you "inside" the characters, share the same view and feeling as the character?
3. How far the characters developed?

Katawa Shoujo, despite of not having too many innovations except of...many of the characters had a sort of disability, had a bunch of interesting casts and easy to grab storyline. Because it's simple and you can easily relate with it, it can hits home!
Character driven plot is rare in games, and many of famous books had a plot-driven story, or at least balanced. Due to support of image and music but still had plenty of narration, Visual Novel is one of the best media to serve a character driven story (although there are some VN that rely on plot, too).
So that's why if you seek similar experiences, try to pick some more good VN. There are many good VN actually, sadly most of VN that legally translated to english were trashes/for perverts (which made many people generalize VN into perverted dating sims)...While KS is awesome, there are some more VN that can rival or even beat your experience in KS...Don't be afraid to try!

Really good VN's tend to suck you in like this one does, so I'm not really surprised by the amount of people who have been saying that the lines of reality and fantasy are slightly blurred, I think it's one of those things you distinguish better as you go on though. My first VN experience was Clannad, which after it was all said and done left me an emotional wreck for a solid week, so I think it's just one of those things that happens and you probably shouldn't worry about it as long as you aren't going off the deep end and swearing off all women that aren't 2D.
"Stories never begin nor do they end. They are comprised of people living, an endless cycle of interacting, influencing each other, and parting ways. As long as stories are told they shall not have clear endings." -Vice President Gustav St. Germain
Top

zeroyuki92 wrote: In my opinion, everyone felt that due to this story is a character-driven story, not story-driven.
Let's see, we got a long dialogues and narration (in this case, monologue). There were not many actual "plot" happened in the story, and plot twists are something even more rare. And then why it's counted as good? That's simply because it's character driven.

Your completely right there, I can see how it is more character drivin then story drivin.

Anyways thanx guys, thanx to the replies in this thread and from reading some other ways, I can see everyone has there own way of reacting to visual novels, this one in particular, me I was just being a worry wort lol =P.
Thanx again guys.
Top
Post Reply
14 posts • Page 1 of 1