The eastern form of art that is Haiku,
Is something I have never really learned.
Thus writing Haiku's something I eschew.
For Shakespeare's verses have I ever yearn'd.

Silentcook said it
Playtime is over so go home
Time to lock it up?

Well to be honest
I always thought "why is this
thread not in Fan Works?"
This one needs to lurk moar. This one lurks too much! Ahh, this one lurks juuuuust enuf.
Katawa Haha: Disability Mothers
From Shizune's Perspective: a fanfic
Top

Mirage_GSM wrote:The eastern form of art that is Haiku,
Is something I have never really learned.
Thus writing Haiku's something I eschew.
For Shakespeare's verses have I ever yearn'd.

I've always preferred Allen Gisnberg's writing, due to his
use
of free verse and interesting metaphor,
and touching on subjects that caused
moral panics. But I don't think I emulate "Howl"
in it's entirety
without driving other posters hysterical
Top

A breakup happened
To me in my real life
I want Lilly bad.

(And that, my friends, is rather sad.
Top

Will he get lucky?
sex with a heart condition
can be a killer
Top

On K.S. forums
Topics thrive and die, in a,
Strange machination.

Purple Haired wrote:(I'm 90% sure Strange has just one syllable.)

Not that I didn't get into an argument over that one…
I found out about Katawa Shoujo through the forums of Misfile. There, I am the editor of Misfiled Dreams. 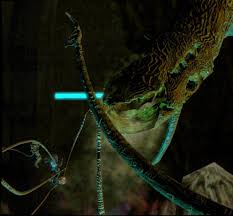 Thinking of the earlier post about shakespeare, I wrote this english sonnet with Lilly in mind. 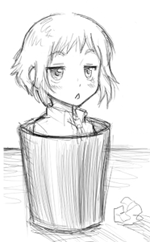 There once was a lad from Yamaku.
Whose heart went kaput, yet he pulled through.
He came on to a deaf girl,
Who stabbed him with a drill curl.
"Fuck it, I'll just go read Fakku..."

On the racetrack a girl had been running,
and her path was subject to much shunning.
With anguish she was beset,
"Am I popular yet?!"
Yet Armless was just far too stunning.

There once was a girl wracked by burn scars.
Though fanatics we are, she was not ours.
She had a fondness for chocolate,
And often we mocked it.
Later, she switched to cigars. 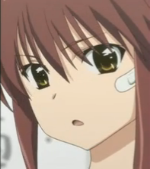 I see what you did there.

Ranking after act 1:
Hanako > Rin >> Lilly > Shizune > Emi
I played the routes in that order, every ending and all.
Ranking after full playthrough:
Lilly > Emi >> Rin ~ Hanako > Shizune
Top

In these hallowed halls of learning,
Most people tend to perceive:
These students are desperately yearning
For some impossible reprieve.

Yet they strive to take their fate,
Achieve that coveted goal.
Fighting to control the rate,
That they have to bear their toll.

The trodden and weathered
Take their rightful place
As masters of the unfettered
Unbeaten at their own pace.

I saw some poems beside the Haikus, so I decided, what the hell.
Top

In the tea room did a blind gal reside,
my tomfoolery she'd often chide.
Though she could not see,
my hand crept up her knee.
With my face, her cane did collide.

There once was a lass-fearing laddie,
whose paranoia had kept him girl-free
Many people considered
that perhaps he'd been embittered,
by the girl from the school's library.
Last edited by Sleet on Fri Dec 09, 2011 2:06 pm, edited 1 time in total.
Top
Post Reply
48 posts