Yeah, is there any game where a disabled person does not have said disabled function replaced with some sort of awesome ability or prosthetic?
<!Aura-> I did a line of powdered fig dust mixed with high grade blow from the ass of a supermodel wearing a Misha kigurumi at the party yesterday

toast wrote:Yeah, is there any game where a disabled person does not have said disabled function replaced with some sort of awesome ability or prosthetic?

That's definitely a tough one! Probably would have to be characters from less action-oriented video games. Even then they probably wouldn't be a main character. Though as far as disabilities go, most you tend to see is a wheel-chaired side character. In action games if someone is blind, they have super senses or laser beams, and a missing limb is never not a cyborg part. XD

On this note though, I was surprised to see that the main character of the movie Avatar was paralyzed from the waist down. Obviously in blue-person form this wasn't true, but during the segments when he wasn't in that machine, he was very much disabled. After the final fight with the mecha thing, his inability to move his legs almost caused his death. I'm not sure if the first part is spoilery or not, but it caught me off guard!
Top

Pimmy wrote:and a missing limb is never not a cyborg part. XD

Unless you are Glas from Fear Effect, then your arm is gone for good.
Unless you achieve to unlock the true end battle, then you get your arm back


toast wrote:Yeah, is there any game where a disabled person does not have said disabled function replaced with some sort of awesome ability or prosthetic?

Septerra Core girl (Led) doesn't get to do anything special with her robot legs...at least as far as I've played.
Top

Septerra Core girl (Led) doesn't get to do anything special with her robot legs...at least as far as I've played.

She doesn't get to do anything special with them period. They're simply futuristic prosthetics. The main thing that affects gameplay is the fact she can't equip normal shoes/boots that other humans can equip. She equips better hydraulic springs instead. (footgear for robots in the game)
Top

Got a question: Wouldn't Togusa, from GITS:SAC, be considered somewhat disabled considering that his peers in Section 9 are all cyborgs and can display impressive feats of accuracy, strength, agility, etc. pretty much daily? From what I gather, the only implant he had is a cyberbrain, but the rest of his body is kept unchanged (i.e. not "cybernizated") until Solid State Society takes place.
Top 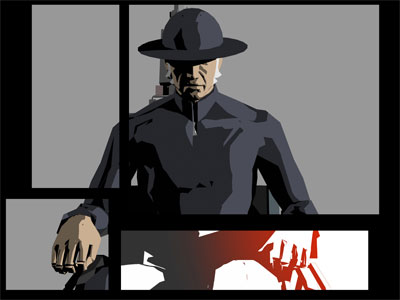 One of the more recent examples and as an "added bonus" he does not possess any prosthetics: Imran Zakhaev from Call of Duty 4: Modern Warfare.

Ahh, Morticia? I would die for her. I would kill for her. Either way, what bliss.
Top

I saw the core!

Yeah I had this game too.

The guy without the arms was some kind of assassin. The army brat was a mechanic who developed a thing for the junker inventor who had been in your party since the beginning. They had some interesting combo moves which were entirely pointless as you would rarely put them together in a team.

Then there was the cyborg. He could maybe be classed as disabled depending on how you look at it.

Bionic Commando doesn't seem to have been mentioned. If course, while is an amputuee (courtesy of a grenade going off in his hand) he's also packing a prosthetic arm with a 30 ft grappling hook. Mayhem (and much object and enemy flinging, along with swinging of course) ensues.
Top

Well, the Bionic Commando guy does at least spend the first level of the 2009 game with just his right arm.
Top

Not the main playable character, but he did do some pretty badass stuff throughout the game, including winning a street race or two, beating CJ in some video games, leading the Triads etc.
Top

The main character of my game has an extreme form of hemophilia - touching a spike causes him to explode in a shower of red pixels and die instantly.
The ultimate KS personality quiz
Top

Oh yeah, in MGS3 Snake gets his eye cut out. Legally, that counts as being disabled, not sure if it's severe enough to belong in this thread though.
These fermions smell positively ionic.
Top
Post Reply
67 posts