Sorry to post so randomly(I actually only made an account for this)
I'm a fan(not sure if I could say dedicated fan) of this game since I learned about this back in the day(and recently heard about the official** release earlier this year), so I want to offer whatever help I can.
I know its still just v1, but I do agree, from what I have seen so far(just started lilly's route), there do seem to be typos/grammar mistakes here and there.


It probably would be very arrogant of me to think I alone should be able to help with this, but I still wouldn't mind in my free time(which is already short, to say the least)
Top

Bleeding Heart wrote:To be pedantic, these aren't so much spelling mistakes as they are grammar mistakes.

Not only is this remarkably pedantic, I think it's also wrong.

One would ordinarily insist that the errors are grammatical and not typographical or spelling errors when, and only when, it's clear that the person doesn't understand correct grammar. You would not call it a grammar mistake merely because, by misspelling the word, it completely upends the syntax of the sentence. For example:

Grammar Mistakes: Not Grammar Mistakes: Just because a spelling error changes the syntax of a sentence does not make it a grammatical error. If that were the case, then, by your logic, all spelling errors would be grammatical errors as all spelling errors, by their nature, change the meaning of a sentence by either (1) rendering a sense word into a nonsense word (e.g. bell becomes brll) or else by (2) rendering a sense word into a different sense word (e.g. bell becomes ball). You seem to imply that the only things which ought to be called spelling errors are things like "him" becoming "hin" or "lettuce" becoming "letuce," but this is hardly the case. Again: you'd be better off considering something as a grammatical error when and only when it's clear that the person who wrote the sentence does not understand the underlying rules behind the correct grammar (as is often the case with things like "could of" (could've), who/whom and other objective/subjective word pairings, etc).

In any event, whether we want to call these mistakes typographical, spelling, or grammatical errors, they're still errors that should likely be addressed whenever, if ever, a newer release of Katawa Shoujo comes out. In the meantime, though, kudos to the writers and to their editors for producing a manuscript which on the whole is devoid of such errors. I've seen worse out of professional releases. *eyes North American release of KID's Ever17*
Top

Well, since this seems to be the "typos thread", here's one I found in Shizune's path. (you guys might want to circle the typos too, saves having to re-read the line a few times to figure out what's wrong) 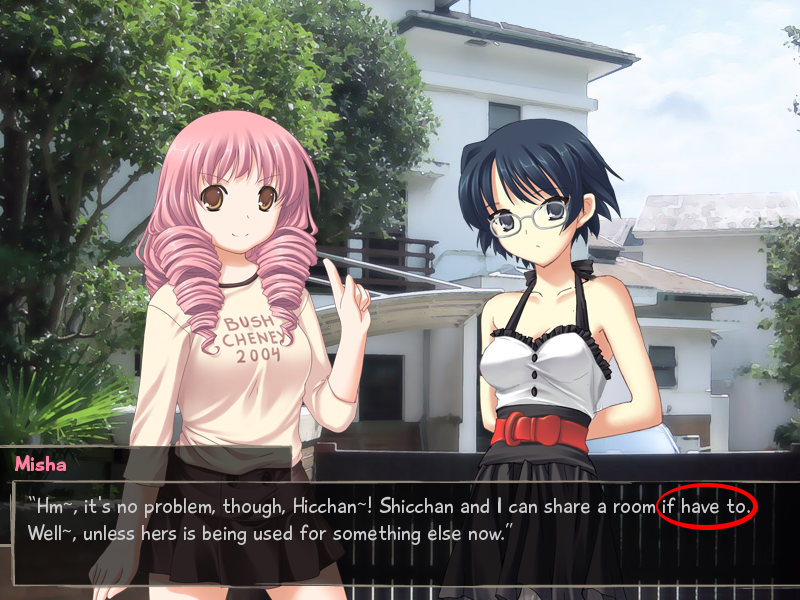 Oh, I've found a couple of typos in the beginning-and some of the descriptions of the surroundings don't match up with the art in the game.
It doesn't really bother me, though-the game is still amazing!!