Thanks. XD And now I have the motiviation to write again! *Highly influenced by comments; writes more when there are more comments on the work*


There was a very long, very awkward silence. Similar to what half of my conversations with Rin consisted of. Even Lilly looked stunned, and she had become a lot harder to surprise after she had started hearing... well... everything.

"Have... have we displeased you, Majesty?" one of the creatures eventually said. I took a deep breath and stepped forward. The burned girl immediately moved slightly so that she was standing partially behind me, as if I were able to shield her from what had to be far more attention than she ever wanted. Maybe I could.

"Not at all." I said loudly. "Her Majesty is very impressed by your devotion, and quite satisfied. You may all return to what you were doing." After a few moments, in which Hanako did not object, the creatures slowly got up, pronounced their eternal and undying loyalty again (though not in concert, as before), and quickly moved off. Before long, the hallways were clear except for a few entities still passing by.

"Somebody had to do it." I answered. "Lilly, did you learn anything?"

"Yes, I did." the other girl answered, smiling. "It seems that Hanako rules quite a large area. It includes, I believe, the Virgo, Hydra, Perseus-Pisces, Pavo-Indus, Coma, Sculptor, and Centaurus Superclusters."

I did some very fast calculations, trying to remember some of what I had read while in the hospital. A Galaxy could contain up to a trillion stars or so, and clusters could countain thousands of galaxies, so that was as much as a quadrillion stars, and superclusters had a lot of clusters...

I didn't even try to calculate how many worlds it seemed Hanako controlled. The short answer was 'a lot'.

What kind of crazy universe had we wound up in?

I gently put my arms around Hanako, who hugged me back for a few very long, very nice moments. She was not the one I would have picked for something like this. Rin, maybe. I don't think it would even have fazed her to be told that she ruled an incomprehensibly huge part of space. Relatively speaking, anyway; the universe was pretty big.

We had to find a way home. Not long at all before, I had thought that something other than King (Queen?) Arthur would have been preferable, but as if the universe just wanted to spite me, I was wrong. This was much worse. Sure, it might have been nice to be rich enough to gamble galaxies in some sort of space-poker. Hanako just wasn't the leadership type, though.

"Vote time." I said grimly. "Should we stay here, or should I see if I can hack reality again to get us somewhere else?"

"Stay." Lilly said immediately. Hanako and I both looked at her. "We do not know where we shall end up next. It would be wisest to rest for now, build up our strength, and perhaps acquire some tools to take with us, just in case. I believe anyone on this station will give us anything we ask for without hesitation; as unusual as it is, this seems to be a safe haven for us. I would like to get back to Yamaku soon, but it seems we cannot control where we end up, and returning may take some time. It is best to be safe."

"...Allright..." Hanako mumbled. She clung on to my sleeve as we started walking through the station; Lilly led us straight to some sort of restaurant, where the owner was practically falling all over himself to make sure we received the best food possible. It was a strange meal, sort of like chicken in orange sauce, but I didn't actually know what it was we were eating. Lilly didn't bring it up. Part of the way through the meal, the Station Master showed up to introduce himself and apologize very profusely for not meeting her when she'd arrived, but Lilly and I managed to calm him down and assure him that we were just travelling and were not going to destroy the station and everyone on it over anything minor. Thus reassured, he also returned to his duties.

Hanako and Lilly both slept with me that night, though we all kept our clothes on. Everything was just so strange, so... different. Staying together was probably the only way we could remain sane. I did acquire a few small trinkets, though, including some sort of beam gun (which I immediately dubbed it a Phaser and set to stun, remembering a subtitled american show that had been played endlessly while I was in the hospital), as well as a number of other gadgets. One of them was very flashy, very elaborate, and did absolutely nothing. I intended to give it to Kenji once we got back just to see his reaction.

He'd probably shut himself in his room for a week trying to figure it out.

In the morning, we had another meal and stocked up on supplies. Lilly had managed to acquire some sort of flexible bodysuit that she was wearing underneath her clothes, and Hanako had been practically buried in gifts. Most of those we left for the Station Manager, who'd given us his room (the best on the station), but several Hanako kept, seeming to like. Once we were all ready, I reached out and focused on the lines, then screwed with reality again in ways that probably weren't supposed to happen.

And... we found ourselves in what looked like the Colosseum in Rome. At least, we were standing in the middle of something similar, but kept in better condition and with old men ringing the seats. I didn't see any non-Europeans, though a few Africans were nearby, dressed as servants. Albiet with quite a bit of modern technology. A flag above the Colosseum flapped in the wind, with a fist clutching lightning bolts as its insignia. Not our home world.

"Oh, screw it! I'm doing this until we get home!" I said as security guards rushed towards us. We vanished again.

A tropical island where mermaids swam up to examine us.

A boy stabbed a man who was emitting black animal shapes from his body somehow.

A girl leaping off a roof and stabbing through ghosts.

Everybody was a Gundam.

"It would appear that we are not getting any closer to home." Lilly said after another dozen trips through the worlds.

"This is absolutely ridiculous!" I answered. "How hard can it be to get home!?"

I touched the lines again.

Yamaku. In front of the blob monster. I crossed my arms in satisfaction and nodded. "You see? Never doubt me. I knew we'd make it back sooner or later."

"Dizzy..." Hanako mumbled. I held onto her as she staggered a little, then looked at the monster as it came close to us. It lashed out with one of its tentacles. Lilly twisted her spear around in one hand, then threw it forward. The weapon pierced the monster through the center, and with a mind-numbing scream, it vanished. The weapon reappeared in Lilly's hand. "Thank you..."

"It was nothing." Lilly answered modestly. "Hisao, I... I have a request."

A day later, Emi and the others staggered into the school, looking like they'd had the best time of their lives. I told them Lilly's request.

They grumbled (except Shizune, of course), but nodded.

I took away their powers, 'crippling' them in that way. I did the same to myself, at the strong protestations of the school's staff.

These powers were too much. I didn't want to be this special, to be some... some sort of superhero. I wanted to be normal, but I never really would be. I would settle for the closest I could get; as normal a life as I could have at Yamaku. I loved Hanako, and Lilly (no longer able to hear thoughts or possessing a super-spear) seemed like she was getting friendlier towards me in the best possible way. Things were just... normal.

The best way they could be.

GILGAMESH! Wish he had more of a cameo, though.
Top

XD Get all the others?
Top

Having read Rednal's (awesome) version, I might write my own. Excellent Kara no Kyoukai reference, by the way.
Top 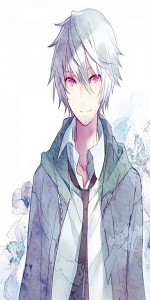 o3o, I can see Lilly wanting everyone to have their powers taken away, pity that we didn't get to actually see(read) them get used though.
~I hate endings~ Fan fiction is the only way to keep KS alive!
~The only good ending is a sequel~
~Want to know why I REALLY fucking hate endings? Mirai Nikki Want to know why I love epilogues? Watch the Mirai Nikki OVA
~Mirai Nikki: A perfect example of endings I hate~
Hanako -> Rin -> Shizune -> ? -> ?
Top

I just read this fic.

I feel less alone (who also want to do a surreal fiction Katawa Shoujo).

I really appreciate it, even if it remains fuzzy things

This is the first time I can not make a choice, since the first generation of Pokemon that I had to choose a starter T-T
Top
Post Reply
38 posts