As always your work is very good,I look forward to anything you put out.
"Sometimes the appropriate response to reality is to go insane."

Hmm, Hanako and Shizune are tough.

Ron hmm? If Kenji is Harry, and Rin is Ron, then who's Hermione?

Hmm, Hanako and Shizune are tough.

Ron hmm? If Kenji is Harry, and Rin is Ron, then who's Hermione?

I guess the only thing "he" could post now is worksafe pics huh...

No, the only thing "he" could do would be to get a clue that a ban is usually intended to mean a ban, not an invitation to come back and ask for more.

Hanako's man-name should be Han, obviously. Although I'm now envisioning man-Hanako as played by Harrison Ford...

I like the girls-with-cybernetics beginning of this thread. What Shizune really needs is a text-to-speech thing with direct neural interface. It would be very effective and cyberpunk looking. Just wire her up with an HUD display on the inside of her glasses and some 'trodes around her head. Would be a hell of a lot less annoying than Misha, to boot (in before Misha fan rage). And I'm wondering, since she already has seemingly enough articulation in her feet, if Rin might not be better off with, like, maybe some kind of painting/art tool at the end of installed cyberarms instead of hands.

Is it bad that I've already thought of Shadowrun 4E stats for most of this without looking at a book?
Top

After seeing the rin picture, the first thing that crossed my mind was: Bionic Commando
Top 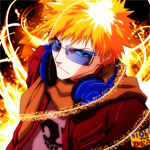 Revenant0519 wrote:After seeing the rin picture, the first thing that crossed my mind was: Bionic Commando

Now mugenjohncel only has to paint her a Grappling Hook thingy 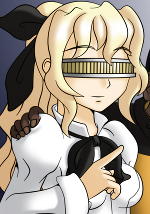 And the first thing I thought after seeing the Rin picture was 'Lilly better get a VISOR!' Thank you for not disappointing