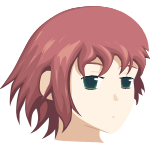 Well "Word of God" is pretty broad. If you take everything an author (or authors) say about their works as canon then you can end up with some offhand remarks or spur of the moment responses becoming "word of god" canonisms only to be changed by the creator when they realise that offhand remark was a bit too stupid. Really the only "words of gods" that should be canonised are the carefully premeditated responses or statements. Things which the author know in their minds that is a canon part of their created universe but which they've never (or not yet) been able to address in their published works.

The problem is picking out the canonisms from everything else an author says.

Yeah, "Death of the Author" and all that. Writers don't really have absolute control of the fictional worlds they create.
Top

with her hand writing, we can be left to assume it's not Comic Sans or anything similar.
It would be beautiful if KS was released for download on October 7. Greatest. B-day gift. Ever. (This is not meant to be taken as telling the devs to hurry up, so please don't take it as such, it's just a dream of sorts.)
Top

More to the point, this thread on our forums, and especially my snarky impulse reply within, got me thinking - why does "Word of God" matter so much to people?

Mostly because when people start fucking with canon in ways canon shouldn't be fucked, it produces something like the Highlander franchise. If the writers can't keep track of all the facts, there's a good chance the whole story will turn into a trainwreck (see: Ultimates 3).

The actual content of the canon is pretty much irrelevant.
Top

To me, a writer wants to follow canon the same way a scriptwriter writes a TV script. Hopefully the writer can expand things while not contradicting what's been established.
I found out about Katawa Shoujo through the forums of Misfile. There, I am the editor of Misfiled Dreams.

It's a bloody story, people. Fiction with an aesop and nudity.

I do not get this anymore.
[19:33] <!Suriko> i think i could go my whole life without putting my mouth on someone's ass voluntarily

Since I started the thread that inspired this discussion, I feel I should probably state the impetus for my post. I'm the kind of guy who just likes to learn stuff for interest's sake. Doesn't matter if it's unimportant, if the topic interests me, I want to know a lot about it. The fact that you, Delta, and your fellow Devs have made comments that set Yamaku's location as being near Sendai, claim Emi's favorite type of music to be punk, etc. Well, that stuff actually adds to the characters and the realism of the story even if it doesn't affect the script itself. Also, stuff like the idea that the principal is either female or a luchador (one could be the assistant principal, by the way, my high school had three, so Yamaku could potentially have one) is fun as well even if it isn't serious. Minutae like Shizune's preferred subtitle font are too minor and unimportant for me to care about, but the other stuff...

Anyway, just thought I'd put my two cents' worth in. And Delta, I know you said you weren't being nice in that thread, but I don't feel you were being particularly mean either, just frank, and I appreciate the honesty, even if it's disappointing.
"There are worlds out there where the sky is burning, and the sea's asleep, and the rivers dream; people made of smoke and cities made of song. Somewhere there's danger, somewhere there's injustice, somewhere else the tea's getting cold. Come on, Ace. We've got work to do." - The Doctor, Doctor Who
Top

This is a real case of throwing stones in a glass house, but the reason I don't like "fanon" is because it only happens with obsessives on the internet. It's the seemingly autistic need to have an almost numerical concept of whether something is true or not true (even though it's fiction, so it's always not true - but that's a different point, really). For example, me and my friends may make a joke or a "what if" comment based on a movie we just saw, but the idea of it being canon never comes into it. In fact, I doubt most of them would even be familiar with the term. The film is the film, what we're saying is just a joke or our silly idea, very off-the-cuff. But on the internet, where strange people take silly things incredibly seriously, all these terms and notions are invented for different levels of "realness" to totally unreal things.

I just see this "fanon" idea as like a Shakespeare play at the Globe, and every so often some guy shouts out "And then Juliet went off and planned to kill Benvolio!" or "Meanwhile, Romeo sucks off Tybalt!" No one is going to take that seriously, no one is even going to validate it by discussing concepts like "fanon". I think fan theories are great things, but that's just the internet word for "people thinking", though. Trying to create a system where there are various levels of fiction sort of orbiting around the "true" fiction just sounds like the kind of crap that gives the internet a bad name (as well as child porn and YouTube, of course).

(I can hear typography geeks weeping about this discussion.)
"There are worlds out there where the sky is burning, and the sea's asleep, and the rivers dream; people made of smoke and cities made of song. Somewhere there's danger, somewhere there's injustice, somewhere else the tea's getting cold. Come on, Ace. We've got work to do." - The Doctor, Doctor Who
Top

as long as there is no contradictions I really don't see a problem with expanding cannon. In fact it's a good thing as it makes the setting more interesting. The more fandom that comes up the more than can be explained and the more interesting the setting becomes. This that is come up with ends up being something that people drool over until made cannon.

For example lets look at that infamous classroom CG. It's obvious that this was a joke but somewhere along the line, part of it has become cannon. After a few long threads on the boards about it pictures appeared on the shimmie of characters like Suzu, Molly, Taru, and Takashi. Why fans drool over even the tiniest bit on info could be the subject of another blog post, however as soon as this happened and these characters developed a personality of their own, and it would be much better if these characters were expanded on for a few reasons.

first off katawa shoujo is special. Unlike other VNs each path has it's own writer. I can't think of any VNs that share this quality. However, in theory (this is coming from someone on the outside), each of the main girls is partially owned by their respective path writer. In other words, the person that should theoretically have the most say in what's cannon about their girl is the path writer. The result of this is each path has less overlap and can pretty much introduce any new character into it as the writer sees fit. I wouldn't be surprised if some of the characters that were in that CG do get smaller roles. Each path is going to need help having the story moved along, and while any of the main heroines could play that role many times those girls either don't know each other well or don't get along. For example I don't expect shizune to play a major role in Rin's path.

As a reader and just by going off what I know about the game, i expect there to be more new characters to be added. And when they are the shimmie going to blow up and have artwork of them. In all honesty i think that yamaku is a interesting setting and I want the enviroment to be expanded more, characters that have started out as a backround have by fans been fleshed out and turned into interesting characters. If they only appeared in one CG it would be a waste.

Or course the inverse of this is that too much of a good thing is really bad. Each path could potentially add a new character or flesh out part of yamaku, but there is a definite limit to what is good for the story and what detracts from the purpose and focus, which is always going to be the main girl and their relationship with Hisao.

The bottom line is that the setting definitely needs to be expanded on to tell the story as well as just making it more intersting. But too much is a bad thing. I myself expect there to be more added and will welcome new characters and details. After all one of the best things about F/SN was that it was part of a bigger universe and it tied into that really well. It was one of the thing I liked more about it.

Last is that if there are any "katawa shoujo gods" on this forum reading this post, please don't rain on my parade and tell me i'm wrong or that there won't be any more new characters, that would just be soul crushing.
Top

I'm sorry, but you generally don't want your cannons expanding. Just the propellent that sends the shells at your target.

Bara wrote:Trolling, lies, sudden changes of mind, and stuff made up on the spot?