Your Children Are Not Yours

TheHivemind wrote: If you have to step forward and say 'Oh by the way this is what I meant' outside of your story then you are not writing very well (FYI this extends to authors like JK Rowling saying 'oh by the way Dumbledore was gay' too, not just fan works.)

To be fair I think that one, having Dumbledore come out to any character in the story would be a pretty out of place thing to happen, two, plenty of people (well, at least a few) got the feeling he was gay during the part in the last book about his childhood and best friend, and three, it's not a fact that is at all relevant to the story. Many authors think up biographies for their characters, and certain parts of those biographies aren't going to make it into the story. Some of them choose to talk about them later, and some don't. (I'm looking at you, Bryan Lee O'Malley.)
Top

"Fan fiction doesn’t attempt to make money off the stories, so it doesn’t really violate anyone’s copyright." I beg your pardon? Where did you get the idea that copyright is all about money? Copyright is about the right of the author to control his own creation...

What a load. Copyright was invented so artists could have a chance of living off the proceeds of their art, traditionally something that was nearly impossible.

While this may or may not be true in the US, in Europe copyright holders have quite extensive protections for matters unrelated to money. Something as simple as the exclusive right to say "I created this work" is protected by law in many jurisdictions, and can't even be sold or transferred in some of them.


Do you think government made these laws to protect the dignity of artists?

While the actual intent of copryright is neither to ensure income for artists, protect their dignity or establish any God-given "rights" (fun fact: the point and original intent of copyright is to encourage increased cultural output by signing away some of the public's rights to enjoy any given work - of course, powerful interests today frame copyright as protecting the innate "rights" of copyright holders,) protecting the dignity and artistic integrity is very much dealt with in copyright law in many jurisdictions.
Top

TheHivemind wrote: If you have to step forward and say 'Oh by the way this is what I meant' outside of your story then you are not writing very well (FYI this extends to authors like JK Rowling saying 'oh by the way Dumbledore was gay' too, not just fan works.)

That's only bad writing if people ask you about it. Nobody ever cared about Dumbledore's sexual activity and when she reavealed that, it sounded like Official Trolling anyway. But that's not important.

Fanfiction is very interesting, EVEN for writers, but there's a very delicate problem about it: it sometimes feels like frustration put in a paper. I mean, it's pleasant when something you were expecting in the story actually "happens", but it's awkward when it wasn't the god of that universe (which means the author) who made it happen. To me, that is. So I wanted Sokka to get along with Ty Lee, but it didn't happen and I feel terrible when I read a story featuring this shipper.
While we are here discussing, Hanako is somewhere hopping from dark to darker tiles. Alone.
Top 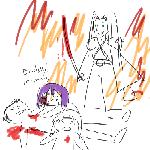 Venger wrote:I own a physical copy of this book:

That is deliciously bad.
"...rest assured that Katawa Shoujo will be released in 2011."
Top

No mention of doujinshi? To think, people actually making money from derivative works, and yet it's generally condoned.

I think fan creations are beneficial in the same sense that any publicity is good publicity (not entirely true!). They generate increased interest in the original creation. If people are into something enough to want to read and make derivatives, they're that much more likely to buy the dvds, cds, artbooks, figures, VNs, dakimura, etc. But more than anything, I think fan creations are just a gauge of how popular something is.

I don't agree that fan creations are necessarily the result of appreciation for the original. It's likely that the creator sees some potential in the story or likes the character designs or wants to parody it or just wants to cash in on the popularity of the original. That isn't to say that plenty of fan creations aren't a labor of love, but I think there is more than one reason for creating a derivative work.

In regards to whether it teaches any real skills, I think doujins are another good example. I don't keep up enough to know one way or another, but supposedly a lot of people in the anime and manga biz got their start with doujins. I can think of a few examples, and I know some legit companies started as doujins, but I don't know how widespread it is, it's just something I've heard.

And while it's true that we're all stealing from the sun and nature and whatever else, making an argument ridiculously abstract can miss the point entirely. The bottom line is taking something that someone has put work into isn't nice. Just because no one technically owns anything doesn't mean it's acceptable to be a dick. Whether this extends to ideas is another issue, but I'd say if someone has a problem with your fanfic, be respectful and try to talk about it out of earshot.
Top

Guest wrote:Just because no one technically owns anything doesn't mean it's acceptable to be a dick.

Oh, if only more people could understand this.
I found out about Katawa Shoujo through the forums of Misfile. There, I am the editor of Misfiled Dreams.

Huh. Well, I always wanted to discuss this, just far too lazy to bring up a topic on it.

As one of those little bastards that's joined on with the semi-nightly writefaggotry on /a/, I can add to the conversation. As far as that goes, if you called what I do bandwagon hopping, I wouldn't argue with you. I guess that with any anime, manga, comic, or video game, you're bound to get some form of fanfiction. And the majority of it, is god awful. However, some of it is good. There's the Shinji/Warhammer 40K crossover that's floating around out there, which is amazing. Then, you have DOOM: REPERCUSSIONS OF EVIL, which as I'm told, is a troll. The point I think I might be trying to make is that you're going to get it in varying amounts and quality. However, I can safely say that the KS fanfics that I've read are nowhere near the level of M-Rated Pong fapfics. They exist.

So, I guess the line 'Your Children Are Not Yours' is a fitting title here. As long as there are people who enjoy anything, you'll get people who write silly little stories about it. Most of them will be god awful. A few will be awesome. It's a matter of sifting.
WAHAHAHA I AM USING THE INTERNET
Top

The Laughing Man wrote: It's a matter of sifting.


I had no idea you sifted fanfic like flour to find the good stuff.

Rin takes an unexpected lead in the updated polls.
Surprised? a little
Is this unexpected? Have you met Rin:)?
Expect the unexpected. lol
Top

The Laughing Man wrote: It's a matter of sifting.


I had no idea you sifted fanfic like flour to find the good stuff.

It's kind of like 4chan in general. It's like trudging through one thousand miles of raw sewage and human excrement.

To find the diamonds that glitter.
WAHAHAHA I AM USING THE INTERNET
Top
Post Reply
69 posts