For all feedback on our releases in all languages.
Post Reply
3 posts • Page 1 of 1

I just spent my entire weekend playing KS and I feel obliged to say something... or rather to say a lot about what I think. I'm not actually hoping to be quoted on this or anything, nonetheless I guess my opinion could be valuable, as I don't match typical visual novel player profile at all. I'm not a teenager anymore nor I'm not some fat network administrator. I have rather healthy relations with women (or at least I have them in the first place). I never tried any VN before and I officially hate manga and anime in general - not too strictly maybe, but I feel particularly sorry for adults who are onto these things. Finally, if I were looking for something to turn me on, I'd simply choose redtube. These are all harsh words, but it's how I see things. The more suprising is, I consider Katawa Shoujo... not exactly a masterpiece, but something, that I most likely won't forget anytime soon.

I doubt I'd ever try it if it weren't for the case of disability in my family. It's no longer a big deal to me after all this years but still meeting a new person with another kind of disability is at least an awkward situation. Back to the point... I still hesitated, worried it'll turn out gross - for the little I heard about KS and visual novels in general, I couldn't think of it otherwise as of some sick Cripple Fucking Simulator. Not exactly the kind of game I was willing to play. But I gave it a shot anyway.

And after a few hours of play we're back to - my goodness. This could've been my exact words after finishing the first playthrough, if I wasn't totally silent. Silent, as if I was ashamed of what I was doing. To be honest - I'm pretty sure I'd be made fun of if my roommates, or anyone else, knew on what kind of "game" I spent so much time recently. And giving it a second thought - if I were to sum up with a single word, it'd be something much more crude than plain my goodness.

I was no less than astonished by how well is the whole thing written. No matter how stupid it might seem, for this short period I didn't follow the confused young man's story - I was him. From the first day, I started judging every single person I met, and soon I knew exactly which girl intrigued me the most. The thing I didn't really know was how my rare choices affect the plot. As a result I ended up with Emi - not the one I wanted, but I wasn't disappointed either; she'd be my second choice anyway. I liked her optimism and stubbornness, and although her story led me through a whole variety of emotions, it was warm, cheerful and reassuring overall. Kinda like romantic comedies, but in a more sophisticated way.

...Completely unlike my second playthrough, which was, as you might already guess, with Hanako. I'm not ashamed to admit I have a thing for shy and vulnerable girls IRL. Thus I'm aware of how challenging it is to gain one's trust. KS shows the matter suprisingly accurately, leading me to think if there was a person with a wide psychology knowledge involved in creating the game (or maybe someone with similiar experiences?). Anyway, Hanako's story is painful and heartbreaking, I felt really sorry for her most of the time and I was actually relieved dragging her out her depresion. It didn't make me feel heroic - maybe it should, but for me it was just a right thing to do and I'd probably hate myself if I failed.

Finally, I commited a little experiment and tried Shizune's path. I didn't really like her and Misha from the very beginning and turned out I was right. I felt something is a bit off in her story and it actually wasn't convincing for me at all. It's pretty hard to explain why though. One thing I'm sure is it wasn't even nearly as exciting as first two paths.

There are still three more characters for me to meet, but from this point I can draw some good conclusions. The most obvious is, Katawa Shoujo is worth it's time. Not only it shows the topic in a very simple, aesthetic way. It also induces all kinds of very, very strong emotions - I wouldn't be suprised, if someone more sensitive bursted into tears more than once. To be honest, if I wasn't repeating "big boys don't cry" all the time, I'd have a hard time containing myself. It was a long, long time since any story affected me that much, even though I'm familiar with some pretty good literature. As said already, it's not likely I'll forget it very quickly. Will it change the way I am? Thats a long shot, but it'll possibly add some empathy to my bitter life approach, making me a better person. And this is very much for a medium of something that's hardly even a video game.

I produced a lot of text and it still doesn't seem complete to me. There are some things that I probably forgot to mention, and some I can't really verbalize. It's okay as is though. I just felt the urge to express my feelings. If anyone could relate - that's even better.
Top 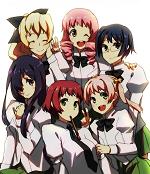 I really enjoyed reading your post! Yeah, most of us at first tend to underestimate the power of a visual novel, but when I got myself immersed in the story I became a rollercoaster of feels.

I tried that "big boys don't cry" tactic on my first route with Emi and it seemed to work, but it was a very good path nonetheless. It also worked partially with Hanako. Her path managed to get my eyes wet a bit, still it was far from crying (same with Rin). Since you haven't played Lilly's path yet, I must say that she's the one that made me cry. For me her good ending was...GODDAMN TOUCHING!! I really want to hear your opinion regarding the other paths.

Everyone hides who they are at least some of their time. Sometimes you bury that part of yourself so deeply that you have to be reminded it's there at all. And sometimes you just want to forget who you are all together.
Top

jmc wrote:I never tried any VN before and I officially hate manga and anime in general - not too strictly maybe, but I feel particularly sorry for adults who are onto these things.

I'm over 30, and I've been active in anime-manga fandom for fifteen years. I currently attend two relevant meetup groups in which all the other members are fellow adults. So those are fighting words. That said, I try to keep a balanced perspective regarding my fannish interests. Sturgeon's Law ("ninety percent of everything is crud") applies to every form of media, no matter how, when, where, or why it was made. Not everyone will like the entertainment that I enjoy. People in my groups liked Bunny Drop, but found Hyouge Mono a bit daunting, and did not care for Detroit Metal City at all. The opposite is also true. I rarely watch television or movies, I don't read as much as I should, and I lack the skills or the interest to get into today's bro-tastic fratcore video games.

For what it's worth, there are a few freeware creators and indie devs creating visual novels which don't have an aesthetic similar to recent anime-manga series. Consider looking into the Vera Blanc series, Terrorbull's freeware VNs, the PC games created by Bentosmile, and Actual Sunlight. Moacube has released Cinders, and is working on Solstice. On iTunes, you can find works such as Dreams of Patoot, Cause of Death, and Leviathan: The Last Day of the Decade.
Top
Post Reply
3 posts • Page 1 of 1