This thread is meant for public feedback on Katawa Shoujo Act 1 Preview release. Bug reports and typo corrections are welcome, and so are of course general feedback or discussion about your impressions too.
<Aura> would you squeeze a warm PVC bottle between your thighs and call it "manaka-chan"
<Suriko> I would do it if it wouldn't be so hard to explain to my parents
Top

So far, I'm loving it. The writing is solid with enjoyable characters, artwork and effects are wonderful, and the music is excellent. I for one think that it's extremely refreshing that you didn't follow typical bishoujo game tropes, and I believe that the characters and story are that much stronger for that. I can't wait to finish the demo. Man, this really motivates me to find some way to help out!

EDIT: Oh, and Lelouch in the class? Absolutely hilarious. I had to stop for half a minute to regain my composure after seeing him. Hope to see more cameos!

EDIT2: Just finished Shizune's route. My goodness she and Misha make a great pair. I couldn't stop grinning at their antics. Seriously, the animation effects are spectacular. The opening cinema and the fireworks show were jaw-dropping. This thing just oozes polish. Props also goes to the spectacular soundtrack. You know, I was slightly hesitant on some of the songs, but hearing them in the context of the game, they fit really well. Either way, amazing work, guys! Now to work on some of the other routes!
Last edited by Warwick on Wed Apr 29, 2009 6:36 pm, edited 1 time in total.
静音是买外夫
Top

Loved it. Couldn't find one fault with it. No spelling errors, no glitches, nothing. The writing was brilliant. I don't know if this would be called a fault, but I did notice the music had a significant delay before looping. Not a bad thing, just a minor detail.

All in all, 10/10. Absolutely amazing that you guys pulled this off. Kudos. 100% of the game already finished, all routes complete. Dying for it to be fully released.
Top

Which one you want to use is up to you, however a few lines after this one it shows up again as "realized," which is what I wanted to point out.

The other is that I think one of the bell sound effects has too low of a bitrate and has audible distortion. Haven't looked into unpacking the game files so I can't double check myself.
Top

I really enjoyed it. It managed to suck me in more than Yume Miru Kusuri, which is saying something.

I can't wait to see more. Thanks for all the hard work to the whole team.

I personally didn't notice any mistakes. No technical issues either.
Top

Typo Reports. Cursor is on word of note.

In the Lilly vs. Shizune CG, Shizune is missing her Zettais. You can't miss out on the stockings! 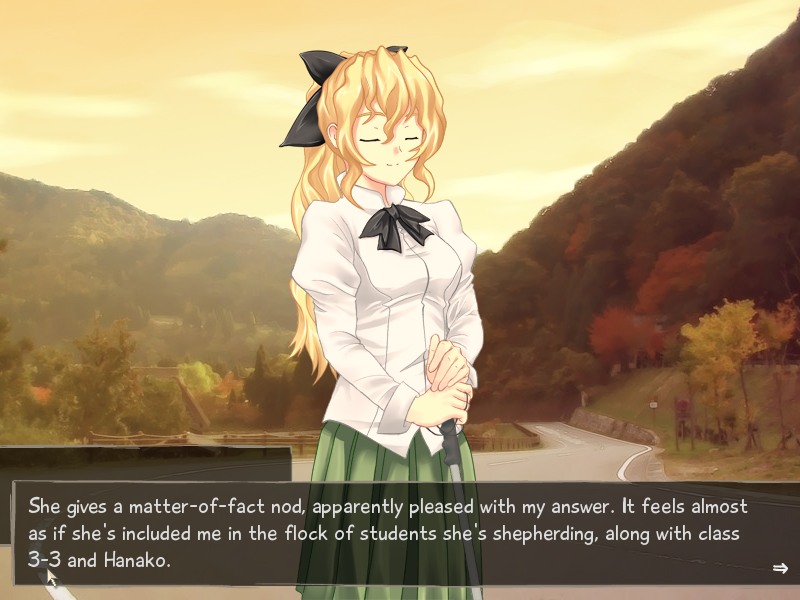 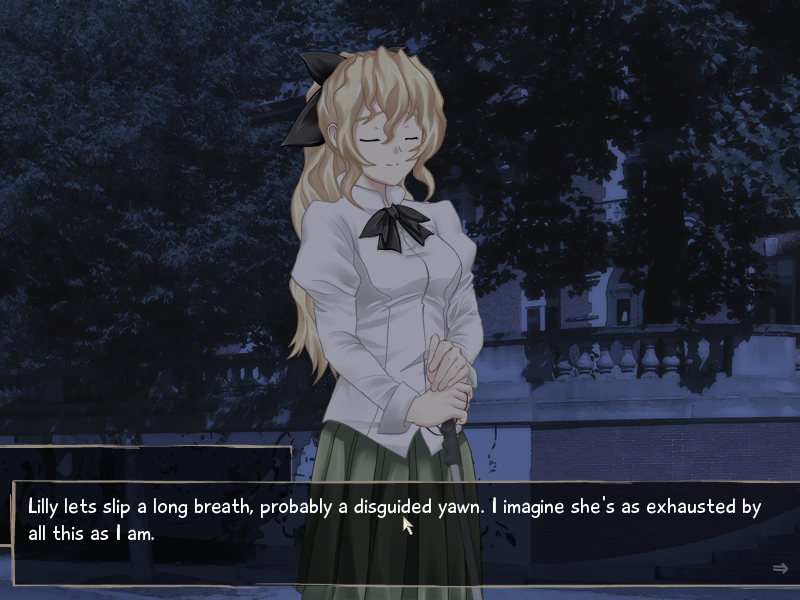 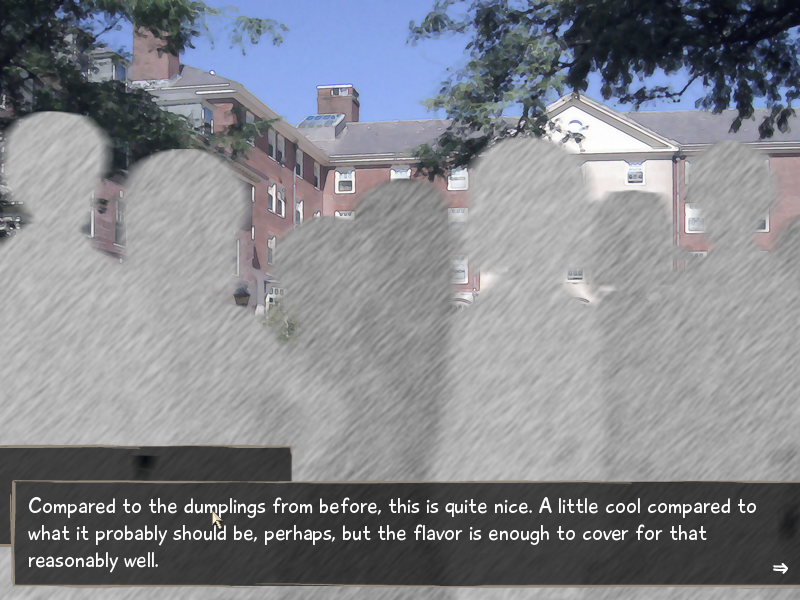 Hmm. I've only gotten to the introduction of the feminist conspiracy, but I have to say that the music in that scene is excellent; it really helped make the scene into the most entertaining yet. Overall, I agree with the game being worth 10/10, at least so far. This is better than some Japanese Visual Novels I've played, actually.


The only part I don't particularly like is when Hisao was being introduced to the class; the camera scrolled across the screen, and if the text isn't synched, he can be describing characters in the text that can't be seen on the screen. They might be there and I just missed them, but if not, then perhaps small buttons to allow you to scroll back and forth so you can view the whole class? Or synch the camera scrolling directly to the text so that whoever is being described in the text is visible onscreen?

Love what I've seen so far. Just a few notes beyond what has already been mentioned.

The colors used on Emi and Rin's names seem to be reversed (if the current colors are intentional, then I would suggest switching them).

There was another typo that I noticed somewhere in the earlier portion of Act I. I don't recall exactly where it occurred, but the word "surprised" was spelled "suprised". Hopefully that's enough to find it wherever it is.

I can't wait for this to be finished.
Top

"Nc5xB3" is the actual title of the scene. It's a chess move.

And, to complicate things further, I call it "K1" because I have a learning disorder or something.

Keep the feedback coming guys; this is our first major release so we need to get as much info out of this process as we can.
My Novel - Now available The Zemlya Conspiracy
Blog: http://cplcrud.WordPress.com

Hey! Just finished the demo, and ended up getting Lilly*end.

I wrote down my thoughts as I played, so I'll paste the parts that are good for feedback! I guess scroll passed if you don't want spoilers??

- This really looks professional! Love the credits.
- LELOUCH WHY ARE YOU IN MY CLASS
- Misha and Shizune seem fun. It's hard to get an idea of Shizune since she can't talk though... her expressions are definitely class-rep tsundere material.
- Lol Hanako. Okay I admit she's pretty moe already.
- It's a bit hard to tell if it's Misha talking or Shizune "talking"...
- This game of Risk made me smile.
- Some of Shizune's sprites strike me a bit odd. Like it's hard to register them as looking "at" me. It's like a weird inbetween of staring somewhere else and looking at the screen. Like an optical illusion, it keeps switching.
- Rin is.. interesting! I like her bluntness.
- Poor Shizune, she probably has trouble getting along with a lot of people.
- (On Emi) There she is! Very cute. Not overly genki either.
- Art is a bit hit or miss, but overall -very- nice looking for a doujin game.
- KENJI WHY ARE YOU NAKED AND IN MY BATHROOM??! Okay well it's probably a dorm bathroom BUT STILL.
- Kenji I like how you say something completely girly after that whole rant. gg.
- I'm.. having trouble following exactly what Shizune is getting excited about. Competition? What is she feeling competative about? Arguing about budget papers? Blah I have no idea what her motivations are. I like this CG though.
- Phones phones phone phone phones
- I like the crowd animation, but I think the flat gray could use to be a warmer gray. Not to the extent of full color, but the flat gray is a bit jarring. (Unless it's slightly tinted and I'm just crazy?)
- Rin and Emi's name colors should totally be switched. They match the OTHER's haircolor!
- Ooohh cute pose there Emi! (Her pouty face) She actually looks more loli-like there. Some of her sprites leave something to be desired, cuteness-wise. Though I can't put my finger on it. Now I have hope!
- I almost wish we could hear a more of Muto's lecures, even just a bit, to get a better handle on his personality. I'm not really feeling it.
- Hanako is way too cute when she smiles!
- Got used to figuring out when Shizune's talking faster than I thought! Guess it's not so bad. Maybe a switched font color like blue or something would help? But Misha adds her own spin sometimes so...
- YES YES YES IT'S THE REVERSE TRAP.
- Brb drawing kenji in a pillow fort.
- Uho! Nice fireworks.
- Well, that was good! I'm surprised.
- Oh! I have a lot of missing scenes. I guess I'll go through again later and make more save states. I ended up sitting with Lilly and Hanako. Judging by my options... DEMO LILLY END. WOOPS. My moralfaggotry of going to talk to Hanako must've done it XD

Looking forward to making different choices! Here I was afraid that the demo would be very limited in that area, I was surprised! Nice amount of choices too. Apologies for a disjointed review full of subjectivity, haha! Looking forward to the full version~
Top

cpl_crud wrote:"Nc5xB3" is the actual title of the scene. It's a chess move.

Well, I stand thoroughly corrected. After seeing all of the other nicely spelled English titles, I must confess that a chess move was the last thing I expected for a title. The fact that I really ought to have caught that is more than a little embarrassing.

So, I first heard about KS only a few hours ago or so from a post on SKC. I have to admit, after seeing the title and the subject matter I decided to check out the demo based solely on a morbid curiosity, a sort of "I wonder how bad this could be" sort of thing. (I have to wonder how often you guys get that as an initial impression.)

But holy crap, the demo blew me away! The writing, soundtrack, and art are all so far above my expectations. Extremely professional and extremely polished. The characters are very likable and the dialog so far has been excellent; often witty and funny, and always interesting and easy to follow. The main character in particular I found very easy to relate to (although this is likely in part due to having a similar - if far more mild - heart condition myself), and his interactions with the rest of the cast were natural and believable.

As far as actual feedback goes (apart from gushing admiration, that is), I don't have much to say. I found it a bit awkward following Misha/Shizune's conversations sometimes, but a. that might be part of the point (:P) and b. it's not particularly difficult to follow. The only other thing that comes to mind is that it would be nice to be able to put a name and/or comment on the save states, but that could be a limitation with the engine (I'm not particularly knowledgeable about how it all works).

All in all, a very admirable release. Really looking forward to the finished product now, even though I have a ways to go with the demo.

The calmest pair was clearly Hanako and Lily.
Shizune was pushy, but was redeemed at the end.
Emi and Rin seem more like a "fun" pair than a possible romantic interest for Hisao.

The Nurse somehow felt a bit hostile, and i wonder if this OELVN will have a villain to beat up.
Top

OOOO-kun wrote:The Nurse somehow felt a bit hostile, and i wonder if this OELVN will have a villain to beat up.