Pretty great descriptions as a whole. Honestly, I think that this is about as good as a story could be when you have so little information about the finished characters. Obviously Lilly didn't end up being quite so filthy rich, but it's still something I could totally see her doing.
Top

If anyone needs me I'll be over in the corner crumbling into a skeleton like the dude who drank from the wrong goblet in Last Crusade.
Top 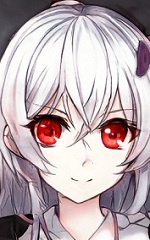 If anyone needs me I'll be over in the corner crumbling into a skeleton like the dude who drank from the wrong goblet in Last Crusade.

Do you have the right time, old man?
Feurox: it is extremely difficult to tell whether you're echoing some very interesting sentiments or if you're just attempting to be trite or funny
Top

If anyone needs me I'll be over in the corner crumbling into a skeleton like the dude who drank from the wrong goblet in Last Crusade.

If it makes any difference, I read KS in my early teens and it was a huge positive influence on that stage of my life, with yours being one of my favorite routes.

Okay. I skipped out on October because I was busy doing my Halloween things elsewhere.

If I do it again, feel free to yell at me.

Let's move on to ME!

Come on, you know I can't resist spotlighting myself every once in a while. (Plus that's what came up when I drew stories out of the hat, so to speak.) Now here's a short little number with Saki and Hisao.

Just Live by Oddball
Not Dead Yet
Top

I like the casual sleepy post-coital vibe with the deep philosophical reflection embedded in it, coupled with some true romantic dilemmas of the kind you get when you date a dying girl.
Post-Yamaku, what happens? After The Dream is a mosaic that follows everyone to the (sometimes) bitter end.
Main Index (Complete)—Shizune/Lilly/Emi/Hanako/Rin/Misha + Miki + Natsume
Secondary Arcs: Rika/Mutou/Akira • Hideaki | Others (WIP): Straw—A Dream of Suzu • Sakura—The Kenji Saga.
"Much has been lost, and there is much left to lose." — Tim Powers, The Drawing of the Dark (1979)
Top

A little too flowery for me, and I wasn't aware of the super-rich Lilly era, but there were elements that were cute enough to still make it an enjoyable read.

Considering what we know of Lilly know, the idea that at one time they considered making Lilly half African and her family owned a diamond mine is just way over the top. I'm really glad to see that gone toned down.

As for the current story, I particularly like those lines:

“You really want me to dump you if I get a better chance?” I ask.
“Yes. I want that. But don't actually do it, because then I'll hate you,”

Personally I don't believe in reincarnation, but I'm honestly unsure what would be better for Saki - that reincarnation exists and she's have a chance at another goaround or that it doesn't and she wasn't some vile criminal in her past life...
Emi > Misha > Hanako > Lilly > Rin > Shizune

We're going to look at a bunch of old silliness this time around! Old stuff is always fun. Sometimes.

"That's totally Cheating"~A Bizzare Nightmare by Rydux.
This is one of those dream stories. If you don't like dream stories, you probably won't like this. It's about Hisao dreaming his game of Risk is for real... and Shizune is cheating.

Attack of Drunk Hanako by Roxius.
There's a few good moments here and there, but for the most part it's a bit too "LOL so random" for my taste. It's certainly better than the other story by this guy we're going to look at though.

and last but least...

A short Anti-Hanako fic (Although I do love her) by Roxius. This story is short, horrible, was apparently written because the author was mad at Crud and has no real reason to exist. This is the kind of story that makes you want to slap the author's mother.
Not Dead Yet
Top

The first two are the good type of random. The third is the bad. lawl is pretty hilarious just because of how smoothly the transition is, and "That's totally cheating" is a fun gundam crossover, even if not quite as good as lawl. Attack of Drunk Hanako is completely just LOL so random, and doesn't really have anything going for it outside of that. And since LOL so random isn't actually that funny, especially in overdoses, the story isn't very good.

The fourth story is the kind of thing I'd write in an online game about somebody's character before ctrl A + deleting it all. Definitely deserves a hearty slap.
Top

This feels like a 4-part lecture in how to do "lolrandom" right.

"lawl", written by the inimitable A22, has a general silliness, but remains consistent in thematic imagery and more closely resembles an overly tortured metaphor.

"That's Totally Cheating" is a slight step down, going for a somewhat grounded scene before bringing in some silliness, but the silliness remains both controlled and grounded.

"Attack of Drunk Hanako" manages to at least retain some degree of causality and plot. That being said, the characters bear little to no resemblance to the individuals of the same name from the actual VN.

"A short Anti-Hanako fic" is somehow both more effort and less quality than your standard rage comic. Frankly, in my opinion, if you're gonna go the route of "I made her drink gasoline", I expect you to do the research to learn exactly how horrific the experience would be, as opposed to "and then she 'sploded".
Current Project: Misha Pseudo-Route

What does it say about the other three stories, that A22's is the most normal one?

The first one is at least readable; the other three... not so much.
Emi > Misha > Hanako > Lilly > Rin > Shizune

I have to say, in my humble opinion, the last one is the worst. Well, we all know it was supposed to work on the shock factory... But, at least, try to do something realistic... It even DOESN'T work like that. I'm ok with the shocking value, but at least, it needs to be kinda realistic....
Lilly = Akira > Miki = Hanako > Emi > Rin > Shizune

Re: Yamaku Book Club (The Ooe Way: A Natsume fic)

It's time for a story about everyone's favorite member of the new paper club.
Maybe their second favorite.
Not counting Hanako.

The Ooe Way: A Natsume fic by motokid108.

The writing itself isn't that great, but it's a nice way to get Naomi and Natsume to notice Hisao.
I feel the characters come across as a bit pushy, and I'm not entirely sure that was supposed to be intentional, but if it was, it works.

Naomi seems rather energetic in a different way than Misha or Emi come across. To be honest, if she was a real person, she'd probably annoy the hell out of me, but she does make for a good foil for Hisao.

This part in particular convinces me that they would annoy me in person, although the "We're being American" punchline is amusing.

In general though, I feel the story itself moved far too fast with too much happening too quickly. Since there was only two chapters written, I guess we'll never know if Hisao was going to be able to keep up this kind of pace.

also...
Hisao may call this a failed attempt at comedy, but I loved it.

“I must say, of all the newspaper club rooms I’ve seen, this has got to be the biggest.” I say

“How many have you seen?” Natsume speaks for the first time.

“So this makes two?”

“No, this makes one.” Naomi and Natsume look at each other, then me. I can feel myself blushing. I can tell that was a failed attempt at comedy.

You're right about 'fast'. In the last para of the first post, Hisao says, "I guess you can put what you have out..."

See, he's already encouraging the girls (yes, both of them) to put out.
Post-Yamaku, what happens? After The Dream is a mosaic that follows everyone to the (sometimes) bitter end.
Main Index (Complete)—Shizune/Lilly/Emi/Hanako/Rin/Misha + Miki + Natsume
Secondary Arcs: Rika/Mutou/Akira • Hideaki | Others (WIP): Straw—A Dream of Suzu • Sakura—The Kenji Saga.
"Much has been lost, and there is much left to lose." — Tim Powers, The Drawing of the Dark (1979)
Top

It's a fun read, but Naomi and Natsume's hyperness is a bit forced in some places...
Also I agree with Blasphemy that writing articles about new students would be quite awkward for the student in question.

All in all this version of Natsume is quite different from... basically all other stories she appears in. Probably not so surprising since it was written before most of those stories came out and her image had time to settle.
Emi > Misha > Hanako > Lilly > Rin > Shizune