Just a little something I had saved for putting into my KS2 fic somewhere and reworked slightly for stand-alone status:

[Shicchan, before you go. You promised me~]

[Now? In front of the others?]

[Are you ashamed Shicchan? We won’t see anyone again. Come tomorrow no-one will care.]

Shizune sighed and raised her hands in defeat.

[OK. Just one. And you better had explain to them first chance you get, you know I'll still never hear the end of this from Satou though.]

Misha beamed as she moved forward.

For Shizune the world went pink.

Still hopping up and down Emi caught Lilly's expression and whispered an explanation in her ear.

"Oh. Oh my." said Lilly. She decided to leave it at that.
Top 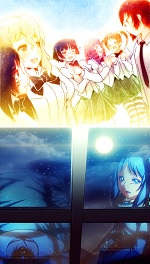 "Forsooth, that line was feeble." - Courtesy of Mirage_GSM

"It occurs to me that maybe I’m an idiot." - Thanks to Jaspirian

Kinda wish there was a bit more to this, there aren't alot of happy Shizune/Misha stories, but for what it is is works fine.
Best girl
Hanako=Shizune>Misha>Lilly>Rin>Emi

YES! YES! Over 9000 Wahahahas for you!
Girls: Hanako/Misha > Lilly > Emi > Shizune/Rin
Routes: I realized that every route has its own charms, but felt that Shizune's was lacklustre. It has Misha though!

How about a happy alternate-yuri story between Misha and Shizune where Shicchan gets fed up with Generic VN Protagonist and decides that its really Misha thats shes loved for so long :3

Kitsune Spirit wrote: Actually thought about that myself... also thought about doing the Emi route from Emi's pov (or at least part of it).

I'd read it. I love stuff like that. Especially since the person doing "Hanako's story" isn't going to do the other routes.
Best girl
Hanako=Shizune>Misha>Lilly>Rin>Emi

Kitsune Spirit wrote:How about a happy alternate-yuri story between Misha and Shizune where Shicchan gets fed up with Generic VN Protagonist and decides that its really Misha thats shes loved for so long :3

Why kick Hisao to the curb? Get all the girls together like a harem, except they're in charge and he's the slave.

Thanks for the words folks, just to let you know that my KS2 adaption is still a thing, was looking what I've done so far for Chapter 3 just today and I have every intention of getting stuck back into it.