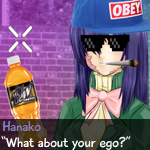 Hello cliffhanger, my old friend... I await the next chapter with bated breath. This was a great chapter, it's good to see the rare Iwanako reconciliation scene done so well.
If Iwanako had a route/was the protagonist of KS, would the tagline be "Can you find it in your heart?"
Top

What a lovely surprise to see an update again so soon. Especially the finale of Act 3, it's been a great three years exploring this phrase of Learning to Fly and seeing Hisao and Saki's development continue all the while the questions continue to be built on and ready for Act four to bring forth in all of the ways KS fics and routes do best. With a mix of heart stringing, ups and down drama that threaten to tear Hisao and the Girl apart. Then brought back together to herald a future that makes all of the detours, bumps and twists in the road to that destination well worth it.

Nice focus on Hisao this chapter with his parents, his old friends whom I was not expecting to appear. Merely be mentioned in Hsiao's thoughts or brought up awkwardly by his folks. I wonder if that was something you hinted to in earlier chapters that I missed (or better yet Hisao missed via his POV) or if it was something you decided to go with when you were writing this chapter. Either way it worked very well and I felt you nailed Hisao's friends down well with what little we got from them in canon or from popular fanon writing of them like Mai that reminded me of the Mai Lefty captured so well. Takumi with his blunt and full on way. Shin being Shin and Iwanako being Iwanako. Liked how it was all handled, the awkward stuff of sorry I didn't keep in context and Hisao and the Iwanako talk that usually comes up during any reunion.

Then when we are so comfortable like Hisao is, WHAM! Saki drops in the most heart-breaking way possible. You manage to convey so much with just a few words of her fear, her state of mine from what we know of her dad and how in the past she tried to kill herself. To know instantly that whatever happened is really serious and sets the stage for so much more to come in Act 4. It's shows how much you have managed to invest us in this fic, in Saki and in the questions you have planted that the scene is pulled of spot on. You built to that moment carefully and with careful detail over the years. that's how writing is done.

I bow to you in admiration and respect.

Seriously cannot wait to see what is coming next.

As always, keep it up mate.

One of the sentences that no father ever wants to here. Especially in the cases when their child has medical issues. We know that Hisao is just going to try to sell his dad on the idea of Saki staying with them but I'm sure that his dad nearly had a heart attack after that. Good thing Hisao's the only one with Arrhythmia.

This definitely feels like where we head into trouble for Hisao and Saki. I wonder if her dad dragged her off to be tested again and the results were even worse than expected... Either way I'm cheering for them.
Top

I enjoyed this chapter also! Like Hisao, I wasn't expecting his old friends to show up. Or karaoke.

I do have a minor nit-pick though...


I kind of imagined that the mythical bond of the note-in-locker confession on a snowy day would do a better job of blocking rebounds.


Ah yes... the note... slipped between the pages of my math book while I wasn't looking. As far as clichés go, I'm more a fan of the letter-in-the-locker, but at least this way shows a bit of initiative.

I do have a minor nit-pick though...

Whoops! I had just replayed the intro too, which is where I must have got fuzzy on it. I'll go back and change that

This chapter was fun to write because it didn't go the way I had planned it. The original draft of it had Hisao a lot more cynical and not enjoying the time at home nearly as much as he is. But once I started writing it, it just came out this way. I hope that having Hisao be more positive allowed him to open up more and have better interactions that were more fun to read.

I knew I wanted an Iwanako reunion, but I wasn't going to use Hisao's friends at all originally. My 8S was kind of a dry run for an Iwanakao reunion, and I wanted to put Hisao in a position where he couldn't actually get out of it to see how he would react. I hope the "birthday party" angle isn't too far-fetched.

Regarding the Iwanako reunion, replaying the intro made me realize it didn't need to be the main focus. In game, Iwanako and Hisao really have no relationship outside of the six weeks she visits him in the hospital. Hisao mentions that beforehand, he has a crush on Iwanako but no real interaction with her at all. That six weeks is important to the story because it sets up the letter, but I wondered what would have happened between Hisao and his actual friends before his heart attack - why didn't they stay in contact?

I went through this during my own hospital stay. I had family members and close friends who only visited once or twice, and at the time it really hurt me. Afterwards though, they opened up to me that they simply were scared of hospitals, didn't know what to say to me, didn't want to see me in the condition I was in, or simply thought they would have been distractions to getting better and were waiting to hang out when I was released. It took me a while to realize that, and I realized how toxic it was to hold grudges over something like that.


Mirage_GSM wrote: ↑
Fri Jun 22, 2018 7:12 am
Nice chapter!
With a cliffhanger like that at the end, I hope your next update will stick to a similar schedule

Me too! There's one more chapter in the act and I'm looking forward to writing it. Realistically, it will be tough to get done before August but I'll try.


Lap wrote: ↑
Fri Jun 22, 2018 8:21 am
Lovely chapter. Dunno why, but I'm always a sucker for Iwanako reunion/reconciliation scenes, and this one worked well.

AlexFDSR wrote: ↑
Fri Jun 22, 2018 8:54 am
Hello cliffhanger, my old friend... I await the next chapter with bated breath. This was a great chapter, it's good to see the rare Iwanako reconciliation scene done so well.

I'm really glad you liked it!

One more chapter to go

"Penultimate" means "next to last."

Decided to add his friends while writing the chapter - it just came out that way and I'm glad you liked it.

Sorry for the evil cliffhanger

Whoops, got caught up in enjoying the chapter and reviewing it that i forgot about the title of it. But hey ho, least we are nearly there now

.
"I think the greatest skill a writer can have is simply having confidence in themselves to tell the story they want to tell, and to have confidence that their audience will make up their own minds on their story and characters." Blackmambauk

I really enjoyed this chapter. Hisao meeting his old friends again and also running into Iwanako is something a lot of authors have done, and I never really get tired of reading it. It's always interesting to see how different authors handle it.
Top

The original draft of it had Hisao a lot more cynical and not enjoying the time at home nearly as much as he is. But once I started writing it, it just came out this way. 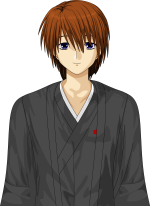 When saki rang and she was crying I remembered about her father taking her somewhere. My first thought was quite possibly an arranged marriage candidate, until another reviewer mentioned tests. Both could/would in her being dismayed.
The line below is false.
The line above is true.

I'm pretty sure it would be next to impossible to find an arranged marriage candidate for Saki.
I can also hardly imagine that her parents would try...
Emi > Misha > Hanako > Lilly > Rin > Shizune

Mirage_GSM wrote: ↑
Sat Jun 23, 2018 4:50 pm
I'm pretty sure it would be next to impossible to find an arranged marriage candidate for Saki.
I can also hardly imagine that her parents would try...

Japan actually has a tradition of this for the dying. Hell, in some areas of Japan they will wed a living person to a dead.
Top

When saki rang and she was crying I remembered about her father taking her somewhere. My first thought was quite possibly an arranged marriage candidate, until another reviewer mentioned tests. Both could/would in her being dismayed.

Either would do it. In a way, the first option would be more upsetting.
Top

The most recent statistic I could find said that while they do still happen, it was around 10% in 1998 and around 5% of marriages in Japan as of 2015.
Stuff I'm currently writing: Learning To Fly: A Saki Enomoto Pseudo Route
Two Turtledoves - A Lilly/Hisao Christmas Oneshot

A nice chapter, with some interesting tidbits thanks to the change of scene - the opening monologue was especially thought-provoking, and Hisao's talks with his old friends definitely fit their characters. I saw the ending coming, but it makes sense. Also, as someone who prefers to keep SpaG good in texts, Hisao's worry resonated with me. I've often thought that people would know I'd been forced to text under duress due to the uncharacteristic change in sentence quality, silly as it is.

Anyways, it's pretty clear that this chapter is a build-up to the next. I expected the call, but didn't expect it to seem quite that dire - which only makes the thought of what might come next more interesting! It's not going to be happy, but I think we're all going to be happy to read it. For now, excellent job, as usual!
Main route: COM(promise)
One-shots: Crafty's One-Shots (Brief Exchanges, Dark Winter Sky, Dreamy, Project Blue Curtain, and more!)
Old poetry: Google Drive Collection
Top
Post Reply
1058 posts