The sun is bright today and the weather is warm. There's just enough of a breeze to make the heat comfortable. It's the kind of day where you want to be outside, but you don't really want to do anything. Days like today are perfect for a nice stroll. Since Hisao and I are relatively new to the area, that gave us the perfect excuse to see the town.

He called it a shopping trip, but neither of us really went out with the intention of actually buying anything. I think he just called it that because he likes to be able to define things. It can be annoying on occasion, but most of the time it's actually rather cute.

I stop to fix the lace on my boot, motioning him to continue. I'll catch up. He keeps walking, but notably slows his pace so I can catch up easier. It's a nice gesture, even if I do walk faster than he does normally anyway. It only takes me a moment to catch back up with him. He's watching a group of young kittens play through a pet store window.

They bring back memories.

I've always liked cats. My parents never seemed to share that interest, so I'm not quite sure where I got it from. I do remember my parents giving me a stuffed cat doll when I was younger. It was pink with a white nose and wore a mint green dress with white lace and ruffles. The dress actually seemed far more expensive and well made than the doll itself when I think back, but it never seemed odd when I was younger. I named it Miss "Meow Cat". Where I learned the English words cat and meow I have no idea. Perhaps if I knew that, I'd know where my interest in them started. … I suppose it's just another mystery lost to the ages now.

Regardless of the origins of her name, Miss "Meow Cat" was my absolute favorite toy as a little girl. I remember taking her with me everywhere and playing all sorts of games with her.

Memory is a funny thing. It seemed like I owned and played with that stuffed toy forever, but it couldn't have been more than a year or two. I know that much because I remember my parents surprising me with a real cat on my birthday one year. I named it "Cat Cat.

Mother wouldn't let "Cat Cat" join me and Miss "Meow Cat" in any of our outside adventures, she was strictly an inside cat. That didn't mean we didn't play together. It's amazing how many games a little girl can come up with that involve dandling bits of string or rolling a ball with a bell in it.

"Cat Cat" was probably my favorite person, more than even many of my human friends were. I loved that cat. I was heartbroken when she ran away. I didn't mean to let her get out. One day she just ran past me when I opened the door. It was the last time I ever saw her.

Mom, dad, and I looked all over the neighborhood but it was no use. We never had any luck finding her. I remember crying a lot. I knew it was my fault that "Cat Cat" ran away.

I'm not sure if it was my father or my mother that told me sometimes animals just need to get out and have their own little adventures. She'd be back when she got tired and was hungry. We even put out little trays of milk outside to lure her back. I know it was my mother that had gave me the milk idea.

There was even talk about taping papers saying, "have you seen this cat?" up around the neighborhood. I drew a few pictures with my crayons to use, but we never ended up hanging a single sign.

Soon after "Cat Cat" ran away, maybe a week at most, our house burned down.

The next several months of my life were spent under a haze of drugs, pangs of pain, stale air, unchanging white walls, and the ever present sense of sorrow.

My mother didn't make it. I knew that before I even woke up in the hospital. I'll never forget her screams. I could still hear them in my sleep sometimes, even years after being released from the hospital. I don't remember when they told me my father died. It was almost certainly a time when I was only half there, but one day I woke up and knew. I didn't even know what month it was anymore, but I knew my family was gone.

My home was gone, my toys were gone, the antique doll collection mother was so proud of, that great tree in the back that was so perfect for climbing, there wasn't anything left.

Everything was gone … with one exception.

"Cat Cat" was still out there somewhere. It wasn't much, but it was something. Like a drowning person grasping at anything they could to stay afloat, it was one of the only two positive thoughts I could come up with. The other was getting out of the hospital and being able to see my friends again. That one … didn't work out.

I wanted to go back and look for her when I got out of the hospital. I kept telling myself I would. First I had to go to the orphanage. Then there was school. Things more or less fell apart at that point. Even fifteen years after the fire, I still haven't been back to my old neighborhood even once.

"Cat Cat" was pretty, friendly, and very loveable. I'm sure she found a new family to live with.

Is she still alive now? I don't know. She'd be pretty old if she was, but I like to think of her still out there alive and happy.

He looks into the window for a moment before answering. "Nah. I was just looking. I've never actually been much of the pet owner type."

I suppose that's just as well. 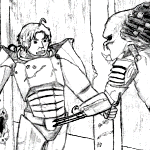 Oh and those triple dots look out of place in the second to last line.
Whenever I log on to this forum it's usually in the dead of night and on a mobile phone. Hooray for technologically-induced insomnia!
Top

Well, you use either a full stop or an ellipsis, not both.
Cute little story by the way.
Emi > Misha > Hanako > Lilly > Rin > Shizune

A really sweet and sad story. Many thanks.

I listened to this while reading. The fic is now bookmarked.