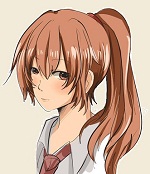 Well this was kind of just drifting in my Google Docs for a few days but I'll throw it out here.

Had a request weeks back for a story about Hisao and Kenji in a honest-to-god Feminist War.

This isn't much and it is poorly written, but it is what it is.

“The thing about nightmares,” Hisao said. “Is that eventually, you wake up.”

His partner shrugs. The light from his friend’s cigarette casts their surroundings in an eerie, red-tinted glow. The bright cherry illuminates few details of their room in the derelict, shelled out bunker they now call home. Rubble from the collapsed ceiling casts mad shadows across the blank walls like an insane puppeteer.

His partner’s lackluster response does nothing to deter Hisao from continuing.

“You know, a car backs up down the road, or your cat decides to claw at your face. The phone rings. Maybe you just wake up. But the point is, you wake.” Hisao’s voice is hoarse from days of shouting, and barely audible above the constant sound of their artillery continuing to return fire.

His partner just gives him another shrug. Hisao’s rants go in one ear and out the other as his friend keeps an eye out the peephole. Occasionally, he leans back from watching to give his cigarette another drag. He doesn’t bother looking towards Hisao as he continues his current rant.

“But this, it just never ends.” Hisao knows his only remaining friend is ignoring him, but doesn’t much care. “I keep expecting to wake up, you know? Wake up, bolt out of bed, realize I’m late for class. Laugh at the weird dream I was having. Probably run into you on my way out of my room.”

“Pffft,” His friend finally looks up at Hisao. “I don’t care how real you think this feels. I warned you, you know. I told you this was a long time in coming, man.”

A long column of ash falls from the end of his cigarette, and lands on the scarf wrapped around his neck. He curses. “God damn it. I just cleaned this thing, too.”

“What do you mean, ‘just’ cleaned it?” Hisao’s voice is empty of scorn, but somehow still manages to sound condescending. “And besides, it isn’t like it matters if a little more ash gets on that thing. It’s all grey now anyways. I don’t even remember what colour it used to be.”

His friend brushes the ash off the scarf and fixes Hisao with something that is probably supposed to be a glare. The effect is ruined by two things. First, the cigarette is out, so they are in darkness again. Secondly, and rather more important, is that Kenji learned long ago that glaring with his glasses never had the effect he wanted.

Hisao watched in silence as Kenji returned to watching the front approach to the bunker. Kenji had all of thirty seconds to enjoy the relative quiet before Hisao spoke up again.

“Let me take over. I’m bored. I can’t sleep with this constant noise.”

“You’re good?” Hisao snorted. “You can’t see a damn thing through that hole, and you know it.”

“Fine. Christ man. Go ahead.” Kenji stood up, arching his back to ease the cramps received from sitting in that same position for the last few hours.

Hisao kept chattering away as he moves to Kenji’s spot. “I mean, I guess I ought to be glad.”

Kenji took off his scarf before replying. “Glad? What do you mean, glad, man? I mean, I don’t see a lot to be happy about just now.” His efforts at wiping the ash off of his scarf only managed to rub it deeper into the fabric.

“Well, I just meant...” Hisao paused for a second, gathering his thoughts. “I just meant that without meeting you, I wouldn’t be here. You pulled me out of the fire, and I still haven’t paid you back for that.”

Kenji laughed. “Yeah, man, you’ve said this probably about twelve or thirteen times now too. It wasn’t a big deal. My father ga--”

Kenji’s cut himself off as he realized he could hear himself talking. The sound of shelling had stopped. He threw his scarf back around his shoulders and dashed to Hisao’s side.

“What do you see, man?” Kenji’s voice is completely calm.

“Nothing, yet.” Hisao’s voice is a stark contrast to Kenji’s. A vein in his forehead throbs and Kenji watches as he grinds his jaw back and forth.

A few minutes of tense silence pass before Hisao’s shoulders lose their tension. Kenji follows his friend’s lead and leans back against the wall.

“Guess they are moving up, or back, or something, I don’t know.” Kenji gives his opinion without being asked. Hisao gets up and moves towards the door of their small room.

“Our watch is over. I’m going to go find the useless excuses of soldiers they call our rotation crew and get some shut eye.” Hisao opens the door and steps into the hallway. He leaves the door open behind him.

Kenji sighed, gave his scarf one more useless brush, and followed his friend to their bunks.
Katawa Shoujo has no hard answers, only questions and tasteful sweater vests.
Stupid pastebin. I'm only linking you because you need it, not because I want to.
In Transit
Top 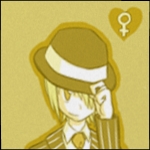 I like where this is going. I wonder how they are going to encounter the girls.

as well as this one

are in past tense, while most of the text is in present. Just sayin'.

bronko wrote:I like where this is going. I wonder how they are going to encounter the girls.

as well as this one

are in past tense, while most of the text is in present. Just sayin'.

Thank you! I have a lot of problems keeping my writing in the same tense, so I appreciate you pointing that out to me.
Katawa Shoujo has no hard answers, only questions and tasteful sweater vests.
Stupid pastebin. I'm only linking you because you need it, not because I want to.
In Transit
Top

Seems like this could be interesting.
First Play through: Lilly>Hanako>Emi>Rin>Shizune
Second Play Through: Hanako>Rin>Lilly>Shizune>Emi
I'm a music enthusiast.
Top

From the first second I read Kenji's feminist babbling, I knew it would make a good story. And this is a good story so far.
Became a better person because of KS. But I was pretty awesome to begin with.
Contender to be the Last Sane Man in an Insane World.
Likes Dogs.
Top

Ah, it's been a while since I read a good war story.

And this is just that

"Who are you, that do not know your history?" -Ulysses
Misha Time: United States of Misha Meet the Hakamichis
Awesome, served on the rocks: Hisao and Kenji- Master Detectives! (Check out the Archive for more!)
I wrote a book! Brythain edited it! If you like mystery and history please consider: A Sister's Habit
"You are absolutely insane. And entertaining." -griffon8
Top
Post Reply
6 posts • Page 1 of 1