The Best Time in Her Life

The Best Time in Her Life

It's been a long time since I've actually written anything, so I've probably lost my touch... still... here's something.


"Are you sure you're ready for this, Ms. Ikezawa?" the doctor said. "It was a rather lengthy procedure. Perhaps you should get your rest first."

"I n-need to s-see this," Hanako said. She softly added a "please" as an after thought.

"Very well," she helped Hanako to the restroom. Hanako was silent as the doctor removed the bandages, not uttering a single word as they were unwrapped from her face and keeping her eyes tightly shut the entire time.

"You can open your eyes now," the doctor said.

"I want to be alone," Hanako said. The doctor nodded in understanding before she realized Hanako couldn't see her. "I'll be outside."

Hanako sat there afraid to move, for several minutes, she just sat trembling. Her stomach twisted into knots. Finally, she couldn't take it anymore. She opened her eyes, in the same way that one might rip off a band-aid to get the pain over with quickly.

Her eyes grew wide as she stared into the mirror. Tear came to her eyes. Her mouth trembled. She wanted to cry out, but she couldn't find her voice.

"Are you alright in there, Ms. Ikezawa? It's been ten minutes."

Another thought came to her. Quickly she removed the hospital gown she wore and tore away the rest of the bandages that wrapped her body with the excitement of a little child opening their presents on Christmas day.

She stood in front of the mirror completely nude. There wasn't a scar on her body.

Hanako dressed herself for school, taking a cue from a girl she had saw in her class. She wore a short-sleeved male's shirt top and short mini-skirt, baring her legs and arms for the public for the first time since she was a little child. Over that outfit, she put on the standard long sleeved woman's shirt and a skirt that reached just past her knees, far longer than she normally wore.

She walked down the hallways with confidence and pride. It felt as foreign to her as it felt good. Arriving at her class, she stood before the door and prepared herself. She was ten minutes late. Coming in late wasn't anything abnormal for her in the past, but today she wanted, no, she needed to make this entrance. She rearranged her hair, combing it over her face in her usual style and lowered her head. It was a struggle not to giggle as she opened the door. For a brief moment, all eyes were on her.

"I… I'm sorry I'm l-late," she hung her head low and pulled the books to her face, to hide the smile she just couldn't contain. "I … I was in the hospital." She scanned the room. She was slightly disappointed that Hisao was absent, but the rest of the class was present. That was good enough.

The class stared at her, curious as to whether she was going to give up any additional information about her stay. Just as Mutou was about to return to is lecture, she raised her head to the class. With one hand she brushed the hair away from her face, and then followed up by removing the long sleeves and skirt she wore revealing the somewhat skimpier uniform she had underneath.

"Hi," Hanako said with a grin.

Everyone left their seats and circled around her. Mutou, sensing he'd lost control did nothing but sit back and watch, a small smile of pride mixed with the slight irritation that his class had been interrupted.

More compliments and questions came forth rapid fire from her classmates, she did her best to answer each one of them.

Eventually the bell ended class for the day, Hanako ran into the bright daylight. Walking up the path, she saw Hisao accompanying Lilly up the path chatting away. She dashed towards them, stopping just a few feet away and standing their silently.

"Hanako? Is that you?" Hisao said.

"You… look great." Hisao said, obviously lost for words.
"Oh there's so much to say!" Hanako burst with enthusiasm. "All this time, there's been things I've wanted to say, but I was afraid and ugly, and I didn't think I deserved happiness, It didn't even feel like I deserved to be a real person sometimes, but now everything is okay, and I --"

"Calm down. Calm down," Hisao urged her. "You're starting to ramble."

Lilly carefully approached her, raising her arm to feel her friends face. "I'm so happy for you, Hanako. You're as beautiful outside as you've always been inside."

"You can say it," Hisao spoke, nearly in a whisper.

"I love you, Hisao. I'm not afraid of saying it anymore. I want to be with you. I want to be your girlfriend, your wife, your every--" her words were cut off as Hisao's lips pressed against hers. His arms pulled her body against his for a moment, no words needed to be said.

Finally their lips parted as they both struggled to catch their breaths.

"I don't know what else to say. I'm so happy for you both. I have always had faith in you." The couple looked over to Lilly; her smile seemed every bit as joyful as Hanako's.

"Lilly, you're the greatest friend anyone could have ever had. I want all of us to be together and happy together. Forever." Hanako said.

Lilly joined them in their embrace. "There is nothing I would rather do with the rest of my life than be your friends."

"Poor thing. Today must have been exhausting for her," Lilly said taking a sip of tea and listening to the change in Hanako's breathing. "Would you care to rouse her and assist her back to her room?"

Hisao looked down at where Hanako lay on the floor of Lilly's room where they had all met for tea. There was a look of unrestrained happiness on her face that seemed so foreign to her normal appearance. "She just looks so happy sleeping there," Hisao said. "I don't want to wake her up. Lilly, I want you to see --er-- feel this."

Lilly sat down beside Hanako. She gently ran her hands across Hanako's face, until the found the edges of the sleeping woman's lips. With a single finger, she traced the smile on Hanako's face.

"What do you think she's dreaming about?" Hisao asked.

Hanako's lips parted slightly. In a voice too soft for even Lilly to hear, she spoke. "I'm all better and everything is going to be perfect from now on." As she spoke, tears fell from her eyes and ran across her heavily scarred face.
Last edited by Oddball on Wed Mar 14, 2012 9:17 pm, edited 1 time in total.
Not Dead Yet
Top

Are you going to continue or was this a one shot?

This here is just a one-shot. I think I've already said everything that I need to say with this story.
Not Dead Yet
Top

Oh, of course you would think so.

Kidding. I'm in agreement of course. Hisao and Lilly's blissful ignorance turned it up to 11 for me.
"A very small degree of hope is sufficient to cause the birth of love." -Stendhal
The verdict is (finally) in:
Hanako > Rin > Emi > Lilly = Shizune

Excellent idea sir, and for the most part very well written. There are a number of simple spelling errors however; 'hr' appears a few times, and 'Muto' and 'Visio' are meant to be 'Mutou' and 'Hisao'. There's one or two more but I think with a quick proofread you could pick these up with no trouble. Always be sure to do this at least once or twice before you submit, in my opinion; once after you finish and once after you make any changes following that, if applicable. Other than that good work, I like the ending, you nefarious bastard, you.

EDIT: How embarrassing. It appears I had a spelling error myself. How hypocritical of me.
BlackWaltz's One-stop Oneshot Shop - my fanfiction portal topic. Contains links to all my previous works, plus starting now any new ones I may produce (or reproduce)! Please, check it out!

BlackWaltzTheThird wrote:Excellent idea sir, and for the most part very well written. There are a number of simple spelling errors however; 'hr' appears a few times, and 'Muto' and 'Visio' are meant to be 'Mutou' and 'Hisao'. There's one or two more but I think with a quick proofread you could pick these up with no trouble. Always be sure to do this at least once or twice before you submit, in my opinion; once after you finish and once after you make any changes following that, if applicable. Other than that good work, I like the ending, you nefarious bastard, you.

EDIT: How embarrassing. It appears I had a spelling error myself. How hypocritical of me.

I do appreciate the advice, although truth be know, I'm HORRIBLE at proof reading. I did go through the story a time or two, some sections more than others, I just never quite seem to catch all the mistakes.

Still, glad you liked it.
Not Dead Yet
Top

>not making it a dream within a dream a la inception

you done fucked up
Top

"We n-need to go d-deeper!"
"A very small degree of hope is sufficient to cause the birth of love." -Stendhal
The verdict is (finally) in:
Hanako > Rin > Emi > Lilly = Shizune 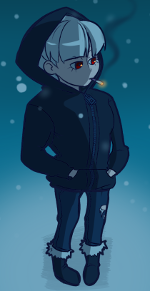 Loved it. The parts where Hisao and Lilly are praising her are especially heartbreaking in hindsight.


Oddball wrote:"I'm so happy for you, Hanako. You're as beautiful outside as you've always been inside."

Imagine how disappointing it is to wake up and realize she'll never hear things like that from her friends.

Poor Hanako.
Writer for Familiarity. I also have an anime blog.
Top

It was a excellent story despite my complete lack of reading comprehension.

Aww, what's so sad? We all know what happens if Hisao plays his cards right if he pursues Hanako.

I enjoyed this story very much! Especially the classroom part.
What if life had a soundtrack similar to Katawa Shoujo's ?
Top

Hmmm maybe the 'bittersweet' category like your "All I Have" story

Fuck you.
God damn. I still love you though.
ooooh feels.
Top

I don't know which would be worse :'(
Like stupid, silly doodles with no point? You've come to the right place, friend :^)
I also occasionally write oneshots. Why not have a skimread?
Miki fic? Miki fic!
---
"We are a small country full of the most stubborn bastards on the planet. You might want to rethink your actions." - Anon
Top
Post Reply
23 posts