My first time writing a snuff fiction, or whatever the fuck kids call it nowadays, is upon us. Flee while you can.

Hisao stood on the side of the bed, gazing at Emi on top of the bed.

What now? Hisao thought to himself.

"Okay, that works too," said a befuddled Hisao. "Undress me," Emi replied.

Hisao had never been so happy to comply to a short person in his life. First he removed her shirt, with the obligatory sports bra underneath. As Hisao motorboated Emi with his nose, Emi moaned in pleasure. Now completely taken over by sensuality, Hisao reached to Emi's back and undid the clasp on her sports bra, letting it fall to the floor.

He had never seen such wonderful tits in his lifetime. They just sort of sat there flatly, like pancakes with nipples on top. Driven by this comparison, Hisao tried to eat the nipples. Emi did not like this very much and slapped him square across the face, causing him to fall through the floor and break an expensive clock.

"Get up!" she commanded. Hisao did as he was told. "Now get out your cock."

Hisao turned around, removed his boxers, and...

"HOLY SHIT, HISAO! WHAT THE FUCK IS THAT?"

"Wait, it's not all bad!" Hisao begged, his eyes wide with fear. "See," he explained, flipping a switch on the bottom, "it even vibrates!"

Emi, to say the least, was very nonplussed, although she normally liked that sort of thing. She continued to scream, and after realizing that Hisao had stuck the key to her locked bedroom door up his anus, proceeded to claw at the ceiling in abject terror.

Suddenly, a noise began to emanate from the outside. Footsteps.

Oh fuck, both of them thought.

All of a sudden, the footsteps stopped.

"Wh-who's there?" Emi asked quite nervously.

Kenji then barged through the door, wearing a boombox playing Dragonforce around his neck, and proceeded to shout, "I TOLD YOU ABOUT THE GIRLS, HISAO! I FUCKING WARNED YOU!"

Emi and Hisao stood in stunned silence as their estranged friend did the Twist while wearing only a single leaf on his groin. They weren't expecting this. In fact, Hisao hoped to his soul that he would never see this day (and, for that matter, that much of Kenji's body), but here he was.

As Kenji danced blissfully, Emi dragged Hisao into the ceiling and fucked him anally for four hours above the Nurse's office. HOLY SHIT, HISAO! WHAT THE FUCK IS THAT?
Top 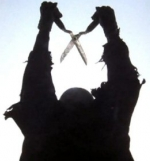 Holy shit, between the actual story and that reaction image, I'm surprised my lungs haven't ruptured from laughter.
Top

You're a sick person and I love you.
Top

HarvestmanMan wrote:My first time writing a snuff fiction, or whatever the fuck kids call it nowadays, is upon us. Flee while you can.

I should have known something was going wrong, because 'snuff' is usually a reference to snuff films. But at least you didn't go that crazy.
I found out about Katawa Shoujo through the forums of Misfile. There, I am the editor of Misfiled Dreams.