"Shizune nuzzles her cheek against mine, slowly moving her hands up my shoulders and pushing me against the wall."

"I hold her back, feeling the soft curves of her figure through the fabric of her clothes. My back against the wall, Shizune presses her body closer to mine; her breasts rolling against the front of my jacket."

"Taking her by the shoulders, I put a little space between her and myself, and then kiss her softly. Shizune's cheeks flush a deep red as she turns her head away, her breath quickening as she squeezes me tighter."

"Looking down at the floor, Shizune steps back, her hands clasped hesitantly in front of her, forming small, plaintative movements in the air. She is thinking about what she wants to /"say,/" but can't."

"Slowly, she touches my face with her hand, using it to guide herself towards me. Standing on the tips of her toes, Shizune kisses me, her lips touching mine before her tongue pokes past my teeth and caresses mine."

"Shizune's tongue entwines itself with mine, her teeth lightly tap my own as her hands tentatively wrap around my back. I use the opportunity to trail my hand down her neck and feel her own hand grab mine gently."

"Her touch is as light as a breeze; her fingers warm and as soft as velvet as they guide my hand to the buttons of her blouse. I start to undo them, doing a slightly clumsy job in my nervousness."

"I look up at Shizune's face. Still blushing, she struggles to keep a straight face. She touches her hands together awkwardly again and again, never actually signing anything. Undoing the last button, Shizune flinches as her blouse falls open."

"Her breasts are amazing, as I had thought. Her arms slack at her sides, her blouse almost slides right off of her on its own, falling onto the floor at her feet. I can see Shizune touching the toes of her feet together nervously, blushing as I look at her body."

"I start moving my hands towards her breasts, waiting to see any sign to stop, but none ever comes. Her bra comes off easier than I'd thought it would. Shizune lets out a short, breathy gasp and attempts to cover her breasts futily with trembling hands."

"Suddenly, Shizune pushes her body up against mine, and starts sliding her skirt off, her face buried in my shoulder, her neck nudging mine away from her so I can't see her face."

"I can feel her undoing my shirt and tie, her fingers stumbling here and there in her haste."

"My head is swimming; I still can't fully grasp what's happening. I never imagined that Shizune could be simultaneously so aggressive and so vulnerable and feminine."

"I slide my hands down the band of her skirt, running my fingers along her hips. Her legs are so soft and smooth. Shizune's bare breasts touch my unclothed chest as gravity sends me us both down to the floor with her on top of me."

"I undo my belt and take off my pants, succeeding only in removing them halfway. My penis against Shizune's stomach, I switch positions with her carefully, moving on top of her."

"I wonder if it's alright to do this without a condom, but it's too late, and I don't know anywhere around here that I could get one."

"Shizune's slit is a delicate shade of pink, and I can see moistness glistening on her thighs like drops of dew. I insert a finger carefully, feeling her tighten around it, her flesh unbelievably hot and slick."

"She tenses up as I get ready to push into her, pressing the nape of her neck against mine and clinging onto me with those slender, pale arms. I enter Shizune and my penis is immediately surrounded by a feeling of warmth and pleasure."

"Shizune quickly pulls herself closer to me, pushing me even further into her. At once, I realize the severity of the situation and begin prepping my troops for launch."

"Mentally shouting orders to my sperm to prepare for attack, I start pumping harder and harder into Shizune, pinning her with my arms to prevent the possibility of a counterattack. When I feel my troops mobilizing, I get ready to direct them as they commence their semen bombing run."

"The allied fighters take off down the canal, engines steady, ready to deliver their payload. I sense Shizune's immune system appearing without warning."

"Shizune starts signing something incoherant. I haven't captured an Enigma machine yet, so it's all foreign to me. I start signing back something equally incomprehensible in my own signal code that I just made up now."

"The allied fighters are getting picked off by the superior firepower of Shizune's vaginal canal, which is not only better equipped for defense than I can compete with with my offense, but is also an area with strange, unfamiliar terrain and many pratfalls that could mean the death of a young ace."

"The survivors fly on through the smoke from the wreckage that just before was their fallen friends. I give a salute to them as a single tear rolls down my cheek. Then, my forces spot the target just beyond the cervix."

"Shizune attempts to push herself away from me, a bewildered expression on her face, but I won't let her get away that easily, not with the goal so close in sight. Ordering my troops to speed up, I launch a second wave to provide support."

"I order Red 9 to take the lead, with Red 5 and Red 16 guarding his flanks. It's an all-or-nothing shot now. The timing is perfect, and I tell them to fire their photon torpedoes. Mission accomplished, I let Shizune go before putting my pants back on and going back to my dorm."
hurr durr
Top 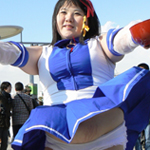 Damn A22, what have you been on?
This is a block of text that can be added to posts you make. There is a 255 character limit.
Top

Hehe the thought of 22 writing erotica got me giggling hysterically (and that was before i read this scene). Very nice, but you get a minus point for not using euphemisms for "penis" although the invasion of Normandy and the destruction of the Death Star more than make up for it.

[09:36] <Suriko> It's like Bel-Air, except funny
<Aura> would you squeeze a warm PVC bottle between your thighs and call it "manaka-chan"
<Suriko> I would do it if it wouldn't be so hard to explain to my parents
Top

I rofl'ed. You used the word soft a lot.
Top

Damn just as expected from you: an h-scene used as a metaphor for combat. Shit is lulzy.
Top