It's just me this time! I read over your latest chapter and I wanted to write down my thoughts. As a whole, I really enjoyed this chapter and I'm liking the direction that this story is heading. Let's dive in, shall we?

Right off the bat, we get this gem. This joke really landed for me. Retroactively, I was surprised afterward that I had never heard anyone else use it—considering how much sense it makes for Shizune's character. Either way, an early joke like this was effective at starting this chapter off with a bang. It was a good hook.


CirnouliK wrote: ↑
Thu Feb 18, 2021 2:54 pm
She's wearing the same uniform as every other girl here, the standard Yamaku white blouse shirt and green pleated skirt, but what stands out to me is what's on her chest.

Or, well, I should say, just her chest.

Next up, we meet our OC, Yuzuki. All in all, this was an effective introduction. A lot of information was conveyed, we get a good read on Yuzuki's personality, we get some foreshadowing for future chapters, and the pacing feels... just right. I'm glad that this story is cutting straight to the chase with the OC. Rather than setting Yuzuki up for twenty chapters, we spotted her in the cafeteria in Scene 1, then we meet her for real in Scene 2. This pacing feels good!

We see Yuzuki playing video games, which makes me wonder if that's going to be Hisao's way in to getting to know her. Maybe she can have LAN parties with Hisao and Kenji?

Now, I think it's time that I address the elephant in the room: Yuzuki's gigantism. As the other commenters have mentioned, the decision to have Yuzuki's gigantism only affect her breasts is a very risky move. However, unlike the other commenters, I have no issue with how her breasts were described, rather the concept in itself was what made me raise an eyebrow. Given how passionate you seem to be about KS and about this story, I know that you're probably not giving Yuzuki large breasts for the sake of 'fanservice.' I know that you're probably going to handle it respectfully, but still... I think what Razoredge said bears repeating:

Honestly, the idea that 'big boobs' could be a disability sounds laughable, and I think that CirnouliK knows this. I'm willing to bet that he's going to play on the ludicrous nature of Yuzuki's disability to make a unique story. Having such a disability must be incredibly embarrassing and shameful to Yuzuki—I can only imagine. Her disability feels almost like a joke, but with seven billion people on the planet, jokes inevitably become real. I can only imagine how it must feel for Yuzuki to be the butt of that kind of joke. None of the Katawa Shoujo heroines are embarrassed by their disabilities, so perhaps Yuzuki could give us something new. I suppose that one could argue that Hanako is embarrassed by her disability, but I don't really think that her 'embarrassment' is comparable to Yuzuki's embarrassment. Ah, but I'm getting ahead of myself. We're only two chapters in, after all. I shouldn't jump to conclusions so quickly.

But yeah, in case anyone is wondering, getting back pain from overly large breasts is actually a real thing that people have developed and been treated for—sometimes involving surgery. Perhaps what makes Hisao different from everyone else in school is that when he looks at her chest, he doesn't actually look at her chest. Instead, he looks at what's right in front of her at chest level: her gaming console.

Next up, we are introduced to Hanako! She's a cutie in this story. As you've done with Hisao and Kenji, Hanako seems a little different here. A little less timid. A little easier to warm up to others. A little bolder. I can only imagine how you're going to change Lilly if/when it comes time to meet her.

I like this. I like how you're taking our established characters and given shaking them up a little bit. I appreciate it when the author is faithful to the source material, but I also appreciate it when someone tries something new for the sake of telling a story we haven't seen before. In this case, Hisao's optimism and positivity make the character fresh and interesting, and Kenji's more down-to-Earth nature makes him a little more approachable.

I raise an eyebrow his way, before shaking my head. "Not any more than usual, no. Wait, why do you wanna know?" I ask, suddenly confused.

He gives an uncommital shrug. "Eh, no reason..."

I LOVE this little bit. When Kenji says, "Have the girls population dwindled at all?" we are led to think that this Kenji might still be the crazy, paranoid antifeminist that he is in the main game, only for him to shrug it off with an "Eh, no reason..." CirnouliK is using our knowledge of VN Kenji to mess with us and I, for one, enjoy being messed with.

Then we get the following bit and realize that the old, paranoid Kenji might still live on a little after all...

CirnouliK wrote: ↑
Thu Feb 18, 2021 2:54 pm
"... Shit. Damn it! Shit! You're right! Fuck!" He starts swearing openly, and it takes all my willpower not to chuckle out loud. Knuckles would be proud. "I gotta tear apart my controllers tonight, man. We'll play another time."


CirnouliK wrote: ↑
Thu Feb 18, 2021 2:54 pm
I grab my bag, stuff everything inside, and am on my way out the door behind everyone else, before an almost-unnoticeable touch stirs me from my waiting in orderly fashion.

In this case, the words 'almost-unnoticeable' doesn't need the hyphen connecting them. The phrase works just fine without it.

Well now, I've reached the end of my analysis. As I've stated at the beginning, I enjoyed this chapter. There is no repeated content from the VN, just as I was hoping for. The pacing remains zippy and fun. Your varied vocabulary is a highlight—I can recall off the top of my head the word 'lucid' sticking out to me. The paragraph breaks issue that Brister and I brought up last time was nowhere to be seen here. You're off to a great start! Looking forward tor reading more.

As for the large breasts, breast hypertrophy is a real thing.

https://en.wikipedia.org/wiki/Breast_hypertrophy
Not Dead Yet
Top 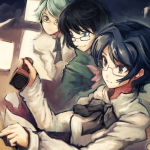 Hmm! I might just use that instead. Good idea, Oddball.
Shizune=Misha>Emi>Hanako>Lilly>Rin
Just another internet drifter that likes cute girls with short blue hair, and glasses, that are deaf-mute.

After reading up on that, I wish to add to my comment, with a slight apology. While I still feel the description of the OC's chest was other the top, I see that it fits Katawa Shoujo (somewhat). I definitely feel that if you use what has been provided, the story's premise won't seem so far-fetched.
Top

Just a quick update; sorry for slow progress on new chapters. Been looking for a new job recently and improving my relations with my family, among other small bits of procrastination. But this all isn't to say I'm not thinking about this story still; I'm already coming up with what'll happen up until and during the festival, and considering where to go from there.

I thank you all for your continued patience!

Shizune=Misha>Emi>Hanako>Lilly>Rin
Just another internet drifter that likes cute girls with short blue hair, and glasses, that are deaf-mute.

Read this article a few years back, and it seems to be pertinent to this story.

Usually you would surgically remove something like that - apparently health insurance paid for it even in the US!
Emi > Misha > Hanako > Lilly > Rin > Shizune