Well it took me all day to read this—not due to the writing itself, but because I got busy. But MAN it was worth all the time I took. You got some great writing going on here Scratchman. The story itself is so unique and captivating, and your characters feel so alive I love it. Tsu is absolutely adorable, and I feel bad she's going to get caught up in the Emi-Hisao drama which has been teased very well so far by the way. Keep up the good work buddy!
My Fics:
From Tokyo To Mumbai
Our Holiday Vacation - A Shizune One-shot
Winter's Blossom
Top 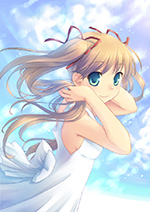 I meant to reply to all of this like the day after I posted but that didn't happen, lol.

QuietlySomething wrote: ↑
Sun Mar 11, 2018 5:14 pm
I'm surprised I didn't leave any comments on this fic earlier but it's really coming along nicely so far. Well-paced, and good dialogue and characterization. Good work.

Zerebos wrote: ↑
Sun Mar 11, 2018 11:49 pm
You got some great writing going on here Scratchman. The story itself is so unique and captivating, and your characters feel so alive I love it. Tsu is absolutely adorable, and I feel bad she's going to get caught up in the Emi-Hisao drama which has been teased very well so far by the way. Keep up the good work buddy!

I'm glad you guys are all enjoying it, thank you for the positive words! I'm especially glad that the characters seem to being coming out right, since that's one of the things I'm usually the most worried about mucking up. Hopefully y'all will continue to enjoy it as I write more!

Huh, I actually didn't know that! I thought about it for a bit but didn't really look into it too much. Anyway thank you for the info and kind words, Mirage!
Top

Author’s Note: Hello again. What a familiar situation we’re in, with me having a chapter completed for months and just never posting it. I know this is a short one, but I have another 2 chapters that are pretty much complete (and much longer), so if all goes well those will be posted soon.

I slide my key into the lock of my apartment door. A satisfying click sounds off and I turn the handle to enter.

A slight smile is still stuck on my face from earlier, a product of actual progress between Emi and I. Only once I’m greeted by a sleepy looking Tsu do I realize how odd I must look.

“I’m surprised you didn’t go to bed without me,” I comment, closing the door softly behind me.

“You know I have trouble falling asleep when you’re not home.”

I nod in agreement, taking a place next to her on the cushions. My eyes are briefly drawn to the television, but I find nothing particularly gripping to stay focused on; after a few moments, I gravitate back to staring at Tsu.

“Yeah, sorry about that by the way,” I say. “Dinner was a very last minute plan.”

Tsu shakes her head. “No, don’t apologize. What’s wrong with spending time with a friend?”

I don’t have an answer to her question, or rather the obvious one is “nothing,” so I mutter a quiet agreement and fall silent. This prompts Tsu to shift into probing mode.

“Dinner, the run...everything, I guess. I assume at the very least you went to eat with whoever it is you’re running with?”

“How perceptive of you.”

I receive a punch to the arm for my teasing. “Who are you running with anyway? Is it an old friend or someone?”

And there it is. The question I’ve been preparing for yet simultaneously dreading this entire time. While it shouldn’t be an issue, my unwillingness to explain the details of the situation has only made Emi and I running together even more suspicious. At this point, I can’t afford to avoid talking about a painful past. So instead, I forge onward.

“Yes, an old friend from Yamaku actually, Emi Ibarazaki. We used to run together in high school.”

Tsu draws in a sharp breath through her nose. I don’t think it’s out of anger, but rather surprise. She likely assumed that I was hanging out with a guy friend this entire time, which I honestly can’t blame her for.

“Does Emi also happen to be the person you mentioned at the park a while back?”

Her ability to piece together this puzzle so quickly is astounding. I will concede that it’s probably not too difficult, since I haven’t exactly mentioned friends from the past on numerous occasions. I give a small nod to confirm her question.

“Well? Does that mean you guys managed to work things out?”

“We did make some progress at dinner, so I’d say yes,” I reply, stunned at how well she’s taking this.

Then again, I still haven’t really told her everything. It’s almost as if this thought alone cues Tsu to hit me with her next query.

“Why didn’t you ever tell me about any of this, Hisao?”

“The reason I didn’t want to bring it up is because...Emi and I dated back at Yamaku.”

Tsu doesn’t even flinch, though I do notice the way her eyes veer away from me.

“We actually dated for a bit into college as well, but we ended up having a really big fight. Things got ugly, we broke up on bad terms, and we parted ways for years.”

“And then you met up for your friend’s birthday?”

“Unknowingly. I had no idea she was going to be there, so that was quite the experience.”

She nods slowly. “So why did you two decide to start running together, then?”

“Because,” I explain. “She was the one assigned to run with me back at Yamaku. She’s the best candidate for making sure I’m safe. Plus she’s a track coach, so if anyone can whip me into shape it’ll be her.”

My explanation sinks in for a few moments and Tsu seems overall accepting of it. She stays silent for a while after I finish, so I decide to speak up again.

“I’m sorry for not telling you all this sooner, Tsu.”

She locks eyes with me and I can see the emotion behind her gaze. A light pain, as if she’s hurt that I didn’t trust her to not get mad and instead chose to hide things from her.

“It was just a lot that came rushing back all at once. I wasn’t able to process it myself, and I didn’t want to worry you by dumping all of this on you as well.”

“You know the less you tell me-”

“-the more worried you get. I know, which is why I’m apologizing. I should’ve been up front about it.”

Tsu rests her hand on my leg, rubbing it gently. I lay my hand on top of hers, taking in and appreciating the warmth as a way to relieve my nerves.

“I understand. You were under a lot of stress, especially after your...after that night.”

I cringe as she pauses before mentioning the night of my flutter. It almost hurts more when people dance around the issue. Although I have no right to judge in that regard right now.

All I can think to do at the moment is agree and apologize again, so instead of wasting the time and energy I stay quiet. We wordlessly watch television for a few minutes before the conversation picks back up.

Tsu raises an eyebrow. “What?”

“I think you and Emi should meet each other,” I repeat, treading lightly. “I know it sounds odd, but you guys would probably get along. And it’s only fair that you get to know the person keeping me alive.”

She doesn’t react to my joke, but instead taps her fingers rhythmically against my hand while she thinks. My first thought is that staging a meetup between my current girlfriend and my ex is a cosmic catastrophe waiting to happen. My second thought is that this could open the door to new levels of trust and the building of greater bonds.

My third, however, is that—regardless of the outcome—I will most likely regret everything.

“Does Emi like to drink?” Tsu asks, cutting off my thoughts.

A flurry of memories from our early college experience run through my head. Within seconds a healthy blush has spread across my cheeks, forcing me to turn away from Tsu to hide it.

“Well then, looks like it’s gonna be ladies’ night at the bars!”

“Is that ladies plus Hisao?” I chuckle, turning back to face her.

Tsu smirks at me. “What, are you afraid someone might try to hit on me and you won’t be there to stop it?”

I’m actually more afraid that she might do something regrettable and I won’t be there to stop her, but I keep this thought to myself. Tsu is rather unpredictable when she’s drunk, and mixing that with how Emi gets...well, I’d just like to avoid a shitshow is all.

She obviously sees through me, as I receive a stuck out tongue in response. “Fine, I suppose you can tag along.”

“I’ll be sure to tell Emi to bring a friend so she won’t feel like the third wheel.”

Tsu scoffs. “Are you implying that we make people uncomfortable when we’re together?”

As she says this she slides over to sit in my lap, wrapping her arms around the back of my neck and leaning the rest of her body into my chest.

“I don’t know, it just comes naturally,” I say, shrugging.

Tsu fixes a cold glare on me, holding it for only a short while before we both crack, giving in to the laughter. After what could have been a potential disaster of a conversation, I’m grateful for this. Nothing feels different or broken. In fact, everything seems to be looking up for once.

I allow myself to succumb to the comforting bliss of Tsu’s body pressing against mine. My eyelids droop from the fatigue of a long day, and a heavy haze washes over me. Though it isn’t the most practical position to remain in, and I definitely won’t be falling asleep this way, I remain here and savor the moment for as long as I can.
Top

I'm enjoying this. See you next year, when the next part is posted!
Top
Post Reply
19 posts