I'll preface this review by saying how hesitant I was to read this. The Akira pseudo-route is hands down my favorite (even with its faults and fumbles). I was worried that I'd read something lesser and it would "sully" my memories (like the numerous mediocre Misha fics have). It was a good thing the other readers gave such praise to this, it was well-deserved and this is a fantastic take on the whole thing. In some ways it's even better than the main Akira fic, yours is certainly a more natural and realistic progression for the beginning of their relationship (since you don't rely on impossible coincidence).

Shizune v. Hanako was a crowning moment of cute and awesome, so kudos on that.

It sucks that this isn't complete, I prefer to binge these things, but I'll wait on it. Keep up the good work; I'm definitely a fan of what I see.

If you ever need an editor or someone to bounce ideas off of, hit me up. I do a lot that stuff with the OSaBC editing group (Mass Effect fic).
https://www.fanfiction.net/u/839525/SLotH4
Top 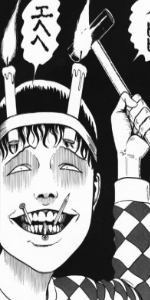 So, after posting chapter three, I thought I would celebrate by taking one of my twelve daily power-naps.

Thing is, I meant to set the alarm on my phone so that it would wake me up in two hours. My thumb slipped and I ended up accidentally setting it to two hours and NINE MONTHS in the future. I only woke up a few minutes ago, so you can probably imagine how embarrassed I am. No, but seriously. You'll have to excuse my absence because; My dog ate my homework, the sun was in my eyes and all four of my grandmothers died simultaneously, so I've been arranging their funerals.

Now that that is out of the way, I just wanted to let everyone know that Sloth4 has been kind enough to edit all of my previous chapters for me. So, if you're into that you can go ahead and enjoy the new and improved version of the story with all of my brain-dead spelling and grammar fixed. Sloth4 has also said they'd be willing to help me on future chapters, which is dope. Y'know, because I'm pretty sure I'm legally considered a vegetable.

Also, I still don't have a graphics tablet, so I haven't been able to draw a cover. I have, however, photoshopped a placeholder cover. I've put that above the chapter index if you're interested.

Finally, I just want to let everyone know that the next chapter is coming very soon, and daddy will try his hardest not to abandon his children again. Unless he needs cigarettes. I know it's kind of lame to post without having something new, but the entire thing has been tidied up and I have a cover now. I figured that the changes warranted posting.

I decided a while back not to read this story. I've never read the other Akira route - I just hated the title of this story. I love a good pun, but... well, I digress. Point is, I avoided this story for a long time. And then somebody mentioned that it had a nice little cover in the front post, so I gave it a look, and then I realized it would probably be interesting, and other people had given it good reviews, and I suddenly wondered why I hadn't read it. So I gave it a go.

The single most surprising thing about this story, to me, is that reading it feels exactly like talking to the author. This probably comes out in forum posts as well, but I've known Cozy for a little while, and every few paragraphs I'd stop and go "That sounds exactly like something Cozy would say." It's well-written, and everything's clear, but then out of nowhere there's something incredibly funny yet strangely pertinent. This is a serious story, but it's got levity smeared all over it, and I found that contradiction really nice. I'm not saying that every joke was a winner, but I was surprised by just how many of them were, especially given the story they're a part of.

I worried, at the beginning, that the whole "Akira route" thing would feel forced. It's always tempting to quicken the pace, to move the story faster, but this is often at odds with realism, especially for unusual pairings ("Oh look, Meiko and Hideaki both showed up on campus during Hisao's first few days! What a pleasant surprise!"). Even in my own writing, I usually skip lots of time, because although it's important that all that time passes, it can get really tedious. Besides, if I'm writing romance, I want to write romance - exposition be damned, I've got ships to sail. This story, however, absolutely got its pacing right. I don't think anybody could call this plot rushed, and yet, at the same time, I never got bored. There was constant, engaging progression, without resorting to forced plot elements or significant time skip.

Characterization was excellent, especially Hisao. I could almost feel myself getting an ulcer as he stressed out in chapter one. His thoughts and actions felt natural (or, at times, appropriately unnatural), which really helped with immersion. The girls all seemed to work well, too, including Akira, which is important. The only characterization "issue" was with Nurse, but I don't think your breaks from canon with him are a problem. Finally, I can't speak for the SpaG before you got an editor, but it looks watertight now.

I don't mind the characterization so much. Hisao was pretty bad off when he started at Yamaku and he doesn't seem to have done anything to make himself more wanted, but what throws me is how he acts like he's so tired of the same old routine when he hasn't even been there long enough for their to have been a routine.

There's nothing wrong with the idea that he feels like he's being pulled in so many different directions, it's just that he hasn't been around long enough to feel like he's earned that yet. He's had one or two conversations with most of these people so far and acts like he's been pulled between them for months.

Your Nurse scene also feel like he laid it on way too thick. He's shown to have no problems teasing people, but I doubt he would have kept going so long seeing how uncomfortable Hisao was and having already told him to cut down on his stress.

Akira offering him alcohol without even knowing him doesn't sit right with me either.

Her showing up when she did, deciding to talk to Hisao and held him fix all her problems without actually revealing who she was really felt just a touch too convenient. I do understand it's hard to make Hisao and Akira interact because in game they have almost no reason to. The more infamous Akira route was HORRIBLY forced at times and never felt like an actual serious of events that would happen to me. You're not quite at that level, but Akira scheduling a follow up does set it on that track.

I'm not really sure I like Nurse wanting people to call him by name either, but the scene is nice.

Generally though, the characterization is nice, the story flows well, Akira is written as a strong fun character and while I've seen more pathetic depressed Hisao's, this is one of the stronger ones.

In general though, I just don't see how this realtionship can work, and no author that's ever tackled it has given me a reason to change my mind.


For the most part, people in Japan aren’t religious, myself included, but there are shrines here and there.

A Japanese person in Japan probably wouldn't refer to "people in Japan." It would more than likely be something like "most people" or just "people here." "People in Japan" IN Japan are the norm. They're just "people."


At least I don’t have to worry about makeup or menstruating.

The menstruating things feel out of place with the train of thought he had.


She’s the easiest one to miss given the fact that I’m certain she’s on the brink of being legally considered a dwarf.

Wouldn't that make her harder to spot?
Not Dead Yet
Top

Well, at least it IS scheduled and not coincidential - half a dozen times

Well, at least it IS scheduled and not coincidential - half a dozen times

Oh, I'll definitely give it the points it deserves there. That other Akira route that shall remain nameless couldn't have been more forced if it tried.
Not Dead Yet
Top
Post Reply
36 posts