Some stuff I drew

From Hisao's Adventures in Wonderland.

I do enjoy hearing people's reactions to the drawings (critical ones as well as positive), but I would like to ask one thing: When you reply with a quote, please edit out the [ img ] tags around the filename, so that the picture isn't duplicated in your post. It keeps the thread from looking too cluttered.
Top

Haha. That is just great.

CNB wrote:She received the scarf last evening, for her birthday.

It was a gift from Shizune.

Who's that, actually?
Seems to be Lilly to me, but would rather make sure.


kulkukan wrote:please, for the love of Wotan, Zeus, and whatever else gods you may or may not believe in, keep drawing.

Also, I second that.
Top

Demoneq wrote:Who's that, actually?
Seems to be Lilly to me, but would rather make sure.

Your drawings are really beautiful.
After playing Lilly's route I started eating pizza with a knife and a fork ^^ I'm such a gentleman.
Top

Demoneq wrote:Who's that, actually?
Seems to be Lilly to me, but would rather make sure.

I guess the itching powder hasn't warmed up enough to work yet.

I'm sad that with all the scarves in this thread that you haven't drawn Kenji yet D:
But yeah your stuff is great, keep at it.
Music for a game that I am sort of working on:
Moustache Riders - Ignition
This seems to be sort of common in sigs here so...
Rin = Kenji > Hanako > Emi > Lilly > Shizune
Top

Hanako was the only KS character I couldn't immediately assign an appropriate Alice in Wonderland alter ego. So I went with the Cheshire Cat because, hey, I like cats; I like Hanako; and I guess if you squint right, the dematerialization schtick suits her. Plus it is an excuse to draw her smiling.

Oddly enough, despite being a fan of both cats and girls, I'm not really big into catgirls. It's one of those "too much of a good thing" scenarios, I guess.


Otakumon wrote:I guess the itching powder hasn't warmed up enough to work yet.

I actually had a whole cute story planned out, where Shizune really does want to give Lilly a birthday present, but is too proud to just bury the hatchet outright. So she goes to elaborate lengths to try and make Lilly think someone else is giving her the scarf, even though Shizune herself is handing it to her -- enlists Hisao or Hanako to say, "Oh by the way Lilly, I almost forgot, there's one other thing I wanted to give you...," something like that.

Lilly figures out who it really is, and Shizune knows she does, but Lilly doesn't say it outright so that Shizune can keep her pride.
Top

Lilly senses a disturbance in the Force.

Never could get the rest of the Alice in Wonderland stuff looking presentable. Shizune was the Queen of Hearts (Mischa was either the Knave of Hearts or the White Rabbit), Emi was the Red Queen, Lilly was the Mad Hatter (having a tea party with Kenji, the March Hare).

I'm pretty sure the equation in the lower right was part of a calculation I was doing to figure out how tall Akemi Homura is relative to the Ninth Doctor.
Top 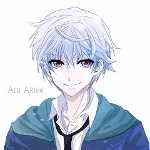 Lovin' this picture ^^ I wish I was as good at drawing as you are.
Top
Post Reply
41 posts