Something I threw together just to see what it would look like.


Some potential Player 2 colors. I mean, what's a fighting game without the possibility of a mirror match, right? 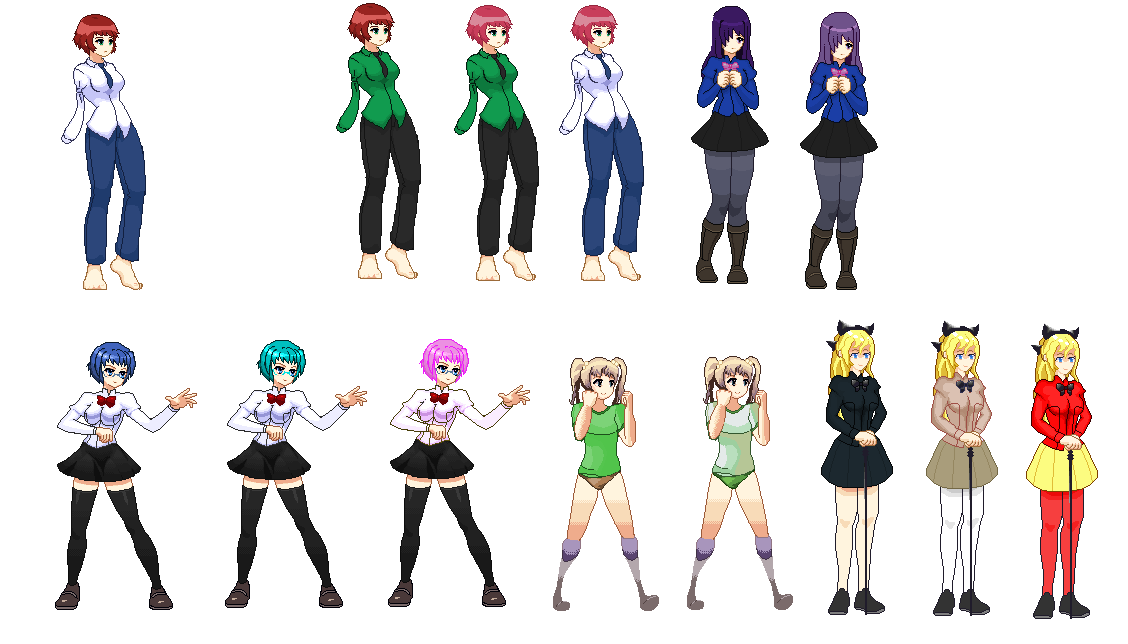 If you choose to play as Lily, the entire screen will be completely black.
My OC, Kuki Kamikogo: http://ks.renai.us/viewtopic.php?f=51&t=9500

Glad to see people still paying attention to our project, though we already quit the pixel game sprite. @_@
About the alternative color, we only had very few talk, since back to that time we don't even complete one playable character...

This valentine's day I didn't manage the time to draw a KS fan art, guess it need wait til april fool's day...

This old sprite from pixel era was drawn totally for fun...?

NightlyShore wrote:Glad to see people still paying attention to our project, though we already quit the pixel game sprite. @_@

I thought about using the vector art for the alt colors instead, but it was just easier this way.
Not Dead Yet
Top

Rin would, of course, use kicks, maybe the occasional headbutt. Gotta figure out some method of incorporating her painting... maybe give her some Okami-style brush-stroke attacks that can strike from a distance. Maybe a quick long-range attack where she paints a butter-fly onto the air that flies across the screen as a projectile. Rin's a rather distance introverted person, and I think she ought to focus on ranged attacks and such.

Hanako's tougher to figure, since she's so non-confrontational. She'd have to have a sort of hit-and-run style, hopping kicks, spastic slaps and retreats. Maybe give her a poke/charge attack involving a pool-cue, or something where she summons giant chess-pieces that fall from the sky.

Emi'd be the speed-queen, of course. I can picture her using a dash-attack similar to Fox's Fox Illusion in Smash Bros.

Lily's rather reserved... since she's blind, and walks slowly, I figure she'd be more on the Mighty Glacier end of things. Good reach, thanks to her height and cane, but low mobility. I believe someone already mentioned weaponized tea-cups.

Shizune... I kind despise her, so I'd end up giving her a crappy move-set and making her night useless.

If was I was going to handle her objectively, I'd probably make her special moves focused on quick combos involving signing. You might also give her a projectile attack where she writes a note and hurls it like shuriken.

If this game does get made, I'd like to see more characters, and hopefully, none of the character will be too overpowered. Other possible characters...

-Misha. Drill-attacks, crushing hugs and excessive volume attacks have been discussed already, I think.
-Miki. I picture Miki as being just a tad slower than Emi. You could give her a gimmick where she uses various weapons to replace her missing hand... or an attack involving a circular saw, if you want to get a little morbid.

-Akira as the Drunken Master. Weaponized wine-bottles out the wazoo.
-Emi's Mom as a Mighty Glacier who fights with cooking utensils.

-I'd kind of like to see Hisao as a joke character. His special attack would be having a heart-attack, thus giving the opponent and instant victory.
My OC, Kuki Kamikogo: http://ks.renai.us/viewtopic.php?f=51&t=9500

Hey, have you considered making Emi a Black Rock Shooter recolor? Just a thought.
"Spunky at his Spunkyest/Spunkiest"
"Tissues to the extreme!"
Top

Good ideas, but here's my own thoughts, plus ideas for "ultimate moves":

Emi: Probably the easiest to figure out; would be really fast and deal lots of quick damage, but at cost of health. Basically a skirmisher. Ultimate might be her legs suddenly becoming blades and her chopping her opponent into bits

Shizune: Methodical, tactical attacks that are a bit slow to execute but can be devastating when hitting. Ultimate would have her tie her her opponent to a chair and then proceed to kick them off into the wall.

Lilly: Long reach and reasonable damage with her canesword, but painfully slow. Absolutely screwed if she comes up against a skilled Emi. Ultimate move would be her pouring scalding tea on her opponent, stunning them and doing heavy damage.

Hanako: A bit harder, but maybe a long-range based fighter, good at keeping her opponents far away and then withering their health from there? Throws books and can use a pool cue as a lance. Ultimate would be her breathing fire on her opponent from a distance.

Rin: Low-hitting attacks that are hard to block, maybe? I really have no idea. Ultimate would be a giant jellyfish coming down and zapping her opponent.

Hisao: Really fragile, but can use some attacks from all the girls. Ultimate is him faking a heart attack, causing his opponent to break down crying, stunning them and letting him crush their heads in.

Nurse: Medium health, medium speed, throws syringes that apply a small damage-over-time effect. Ultimate would be him zapping his opponent with a defibrillator.

Misha: Slightly below average health. Uses her hair for all attacks. Ultimate is a thousand-drill assault on her opponent.

And yeah, many of my ideas are shit, but these are preliminaries.
The best feeling in the world (FTL)

I am legitimately the only member of this website who unconditionally despises Kenji.
Top
Post Reply
337 posts