Act 1
SCENE 1: the FOREST
We open with IWANAKO waiting in the snow for HISAO to find her; she sings of how excited she is to meet him. Unfortunately, during her confession his heart gives out and the LIGHTS GO DOWN.

SCENE 2: HOSPITAL
LIGHTS UP on HISAO in hospital bed with his parents played by EMI and KENJI (smoking a pipe). DOCTOR is SHIZUNE interpreted by NURSE MISHA explaining how he will have to go to another school.

SCENE 3: HANAKO'S DORM
LILLY and HANAKO are unpacking HANAKO's things before the school year begins. It is clear that LILLY has a mother-daughter relationship with HANAKO, who is meek and stammering. AKIRA appears in doorway with LILLY's trunks and asks if they could get busy unpacking LILLY's stuff. LILLY leaves HANAKO alone, who shows the audience another side to herself. LILLY returns afterward and she deflates back into her insecurity.

SCENE 4: THE CLASSROOM
MUTO introduces HISAO to the classroom, and he sees HANAKO for the first time. After class, he tries to meet up with her but is later waylaid by SHIZUNE and MISHA who insist they've never met him before and that he needs to join the Student Council. He breaks away and wonders if he'll ever fit in. As he leaves, supposedly the last student in the classroom, TARO falls off his chair, asleep.

SCENE 5: GIRL'S DORM HALLWAY
AKIRA bids LILLY adieux as a beautiful young girl leaves SHIZUNE's room. It is HIDEAKI, SHIZUNE's imouto who locks eyes with AKIRA. HIDEAKI attempts to cover an embarrassing growth in the front of her skirt, but AKIRA is not fooled and breaks into a tight dance with her.

Act 2
SCENE 1: HISAO'S DORM ROOM
HISAO is looking over his pills as their names are being slid across the wall by GEL LIGHTS. His door opens and we meet KENJI who is relieved at potentially finding a bro against THE FEMINIST CONSPIRACY despite HISAO's attempts to get him out of his room. HISAO eventually insists he must study, a word KENJI reacts to like a vampire seeing a cross made of garlic.

SCENE 2: LIBRARY
HISAO wanders in and meets YUUKO, who is knocking over a stack of books. She straightens up and introduces herself, then points him to the light reading section STAGE LEFT, where as the LIGHTS GO UP we see HANAKO on a beanbag chair reading by herself. HISAO introduces himself and we see a love at first sight that contrasts sharply with the lust between AKIRA/HIDEAKI. They discuss books until SHIZUNE and MISHA appear and HANAKO bolts. HISAO is irritated at being cockblocked for the second time but is dragged off under each girl's armpit.

SCENE 3: HANAKO'S DORM ROOM / STUDENT COUNCIL
LILLY and HANAKO playing chess; once again, HANAKO is being cornered by LILLY on the chessboard as the blind girl needles her about the new spring in her step she hears. The STAGE is split between the DORM ROOM and HISAO sawing/nailing wood comically in the STUDENT COUNCIL. Food is delivered to STUDENT COUNCIL by the CHINESE EXPRESS delivery girl, YUUKO. LILLY's watch alarm reminds her of her studies and she leaves HANAKO to herself, right after a painful checkmate. HANAKO unburdens a girl's uncertain feelings about being the source of a boy's attentions. She finishes and HISAO collapses, sent to the infirmary.

SCENE 5: ROOFTOP
HISAO is pacing alone, wondering aloud if he's insane to take up EMI's offer to make it up to him by offering lunch. EMI arrives up stairs with RIN, who is carrying a bag on her shoulder. As they eat and the two girls bicker, HISAO is amazed by RIN's dexterity and how seductively she feeds herself. EMI excuses herself to go to the bathroom and RIN gives him the business, asking him if the problem's in his pants. HISAO is flustered but also flattered at her frankness. EMI returns and RIN acts as if nothing much has happened since she left.

Act 3
SCENE 1: KONBINI
LILLY and HISAO enter to get LILLY's groceries. LILLY tells HISAO that there's a new boy in HANAKO's life but this concerns her, as she doesn't want to see HANAKO's heart broken by her very first boyfriend. She tells HISAO HANAKO's story and how it would be ... unfortunate if she were taken advantage of, spearing a melon with her cane "accidentally." LILLY and a chastened HISAO leave the clerk, YUUKO. YUUKO wonders on her financial plight as she cleans up around the store.

SCENE 2: ART ROOM/CLASSROOM
Sent to gather more materials for the Student Council, HISAO encounters RIN who is working on a mural panel. Her circular descriptions of art intrigue him but he tries to tell her that he's interested in another girl. RIN gets right to the point, and nearly drags him in. As he manages to escape, LIGHTS GO DOWN on the ART ROOM section of the stage and LIGHTS GO UP on the CLASSROOM where HANAKO is sitting in front of a chessboard, stood up and in tears. She knocks all the pieces to the floor and runs out of the CLASSROOM. HISAO appears, mutters 'fuck' and leaves.

SCENE 3: HISAO'S DORM ROOM
RIN is already waiting for HISAO in his dorm room, dressed to kill. HISAO arrives and demands to know how she got into his room. She forces him down on the bed and his protests become successively feebler until he admits that sex is outside his regimen. RIN tells him that what they're about to do doesn't constitute sex. LIGHTS GO DOWN as she continues "If you're Bill Clinton."

SCENE 4: LILLY'S DORM ROOM
HANAKO is in tears in LILLY's arms telling her best friend that she was stood up, another boy teased her by pretending to be interested in her, and she can't start another year like this. LILLY reassures HANAKO that she's always there for her, even through tough times.

SCENE 5: ROOFTOP AT NIGHT
KENJI and HISAO are sitting side by side and HISAO is clearly confused as his hallmate congratulates him on nailing a whore. HISAO protests but KENJI replies that every bitch needs to be put into her place, starting with the ugly ones. KENJI insists on pouring as much scotch into HISAO as possible as he goes into full Buck Turgidson mode. HISAO passes out and KENJI carries him offstage, a loud THUMP followed by an "Oops."

Act 4
SCENE 1: HANAKO'S DORM ROOM
HANAKO is sobbing to herself, obsessively sorting her clothes, then starts humming to herself. As she continues, the humming becomes louder and she eventually makes an emotional breakthrough, sorting away all her dark and dingy clothes, and opens her window wide as if to say, "Look at me world, I'm not afraid of what you'll see."

SCENE 2: ART ROOM
RIN is continuing her mural, waiting for her boy toy to arrive. HISAO does show up but as she discusses how they could work him up to his full sexual potential he cuts her off and tells her it's over. As he leaves RIN starts to argue but knocks over a can of Prussian Blue, ruining part of what she's working on. Ultimately completing her art on time means more to her at this moment.

SCENE 3: CLASSROOM HALLWAY
LILLY meets up with HANAKO, who tells her that she has nothing to worry about any longer, and she doesn't care if anyone loves her because she finally loves herself. HANAKO continues, telling LILLY that she's going to pursue her dream of becoming a dancer and leaves. LILLY quietly expresses her mixed feelings about watching her bird leave the nest, and drops her cane for the first time, stumbling to regain it as the crowd of students ignores her.

SCENE 4: ART ROOM
HISAO and HANAKO reconcile tearfully, with copious apologies from HISAO and renewed excitement between the two. HANAKO leaves to find LILLY, and HISAO discovers that RIN has been there all this time. As he tries to tell RIN that his feelings for HANAKO are genuine, RIN brushes him off and leaves.

SCENE 5: DANCE STUDIO
The DANCE STUDIO has been decorated as a discotheque and HANAKO is dancing her ass off as the cast serenades her. Astute audience members will recognize her doing The Tile Game on the dance floor. HISAO joins in and then belts out how lucky he feels before CURTAIN DROPS.
Last edited by DuaneMoody on Mon Oct 05, 2009 11:53 am, edited 1 time in total.
Top

You are a bad, bad man Moody.
Top

You have too much free time, Hank.
Top

Couldn't have found better amusement in the rest of my lunch break. I applaud you, sir!
Ahh, Morticia? I would die for her. I would kill for her. Either way, what bliss.
Top

You start Monday. Beatings are part of the contract, and will continue until morale improves.

jeez... and I though RENT was bad!

Screw you, now I have Dancing Queen stuck in my head. Goddamnit.

We're just a bunch of crazy guys and dolls! 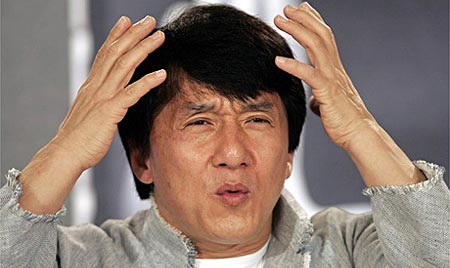 Don't you mean lots of words? Strung together in a musical fashion?
Top

Just how long did that take you?

The thing was inspired by hearing the entire "Mamma Mia" movie soundtrack on a long drive. Sitting down and writing the script and picking the YT clips took about an hour.
Top
Post Reply
13 posts • Page 1 of 1