After a few discussions, I think that it would be a good idea to have a kind of unlockable "Omake" section, like a lot of games do.

Basically, these scenes would be things like seeing the same scene, but described from the girl's point of view, or things that happen "behind the scenes", or somethign from the past...


Once you trigger a certain event, these scenes would be unlocked in an Omake section (just like CGs). Then, you could read them at your lesiure.


Edit:
This is a very old post from an era that has been and gone.
Whilst we will probably have an omake section, it will most likely only contain works generated by the dev team.
However, on *rare* occasions we have taken fanworks and added tehm to the game (like the Act title cards and such) or used to "recruit" new devs.

So please, feel free to contribute, but the likelyhood of getting any fanworks into the game as it stands now is pretty slim; we've just got too much work to get our stuff in there, let alone the rest of the world's....
Top

Any and all scenes will *not* be accepted.
Only good ones.

Also, make sure you are cool wit hteh "licenece" in the news section before posting anything.
Top

the last post is rather old hence the question here - are you still going to make side stories and so into the game??
If so... i might have some ideas~

At this stage there will be no offical side stories in the game.

There may be "bonus" scenes from the writers, but I can't confrim that at this instant.

As for your own ideas, feel free to write/draw/compose them yourself and post them here.

Should we see something here that is utterly brilliant then we could consider inlcuding it as some kidn of "bonus", but that is obviosuly left at our disgression.
My Novel - Now available The Zemlya Conspiracy
Blog: http://cplcrud.WordPress.com

Its so sad that I boarded this epic bandwagon so late... I do believe I could have made some... OK stories...

Oh well, I can still think up of some and post them here right...?

I highly doubt any will be brilliant... (that is if I actually do draw or make some...)
Top

Yes, this board is free to all. You'll even see that most of the devs have used this as a "sandbox' to get out of a writing slump (Well, at least that's what I do). The artist's equlivant is the Mishimme ( http://shimmie.katawa-shoujo.com/ ).

Just one thing to note: This forum doubles as our development forum. That means all of the devs come here regularly. And most of us feel strongly about our characters.
If you post something that we take offence to, don't be surprised if your thread gets deleted.

It's true.
<Aura> would you squeeze a warm PVC bottle between your thighs and call it "manaka-chan"
<Suriko> I would do it if it wouldn't be so hard to explain to my parents
Top

I think I could come up with SOME short stories, but I am still quite baffled by how the H-scenes are gonna work since well you know Hisao had a heart attack by a girl Proffessing to him, I cant really see how he's gonna get some hot sexy Burn-tan action without ending up gripping at his chest and going "HNNNNGGHH!!!"...

Well I think you know what I mean, most of the stories are THINK I can come up with will include H-scenes, but I dont get how a bad heart will come into the equation... -___-...
Top

Eh hive and SC have done it.

But yes mostly me.
My Novel - Now available The Zemlya Conspiracy
Blog: http://cplcrud.WordPress.com

Yeah. Yeah I guess I'm the most, if not only, guily party of that...
My Novel - Now available The Zemlya Conspiracy
Blog: http://cplcrud.WordPress.com

B. Bad end. Woops. I hope it wasn't with the girl who killed her father.

C. Slow and intimate. He already got over the hurdle of falling in love, and... hey I just want to point something out. Arrhythmia just means a racing heart, and -some- caution is necessary. My mom lived with it her whole life, natural-birthed 5 kids, and beat the crap out of my brother(Actually, she put him through a wall. Broke the bathroom mirror on the other side, too.) when he came home drunk one night and was scaring us. My mom's a nice lady, that was the only time I ever seen her violent -OR- angry. She scared the piss out of me.

The -worry- of an arrhythmia should be a literary device, but If you take your meds, your vagus nerve shouldn't start doing epileptic Morse code.
Top 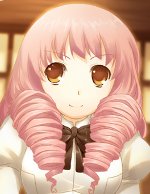 I think I'll pen up a short look into Shizune's past in the form of a journal/diary entry. My writing is crap, but I'll give it a shot.
Top

Director's notes ala Pop-Up Video! Like the VH1 show of mention or those Valve games with those floating dialog balloons you can click on. This one might actually take a lot of time to implement though, but when you think about it, a DVD packed with extras seems to never miss the director's notes feature. And what's great about that is that you wouldn't have to post a blurb every time something memorable about a scene's production came up. You could chose the "best of the best" and put a cap to keep with your timetable. Maybe limit it to 10 blurbs per route or less?

When I read my last paragraph and do the math in my head, I'm probably suggesting up to 60 entries. Yikes. But the reason I would love to see that is I can appreciate a piece of work more when I get exclusive insight into the finer things that brought the final production together.