We are not actively looking for more staff at the moment.
Locked
5 posts • Page 1 of 1 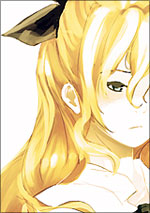 Hello! I recently found this project through a friend, and after falling in love with act 1, I figured maybe instead of just sitting around and waiting for the rest of the game to be released I could actually help out with the process! c:

Ahh, I don't presume to modify or change the style of the art direction any- this is just some fanart. :> I have been, however, painting in photoshop for a number of years now so I am rather familiar with its workings.

I do have an online gallery to show a greater variety of work, but I'd rather not disclose that publicly, so if you're interested in seeing more of what I do I can always send you a pm later.

Aside from general artistic experience, I have also done some work as a writer and an editor (not professionally). I don't have any recent examples of such work handy, but I'm just throwing things out there. I took orchestral music lessons when I was younger, but have since then moved on to tinkering with synth instruments and digital compositions- ah, I'm not a very good song writer, but I do find music fascinating and may be able to help provide constructive feedback on the tunes before they're finalized for the final release, or something. :>!

That about sums it up.

I have a fair amount of free time to devote to a project such as this, so I hope to be of use.

I dunno if I can comment here, but oh well:

You've really got great art skills there, even if the style is a bit off. With such skills I think you'll be able to adapt to the game style easily.
Top

Pitiful teabag, you have scorned me.
Top

Although your artwork is very nice, our art team is already currently bloated, and we aren't accepting any new artists at this time. Thank you for offering to help anyway.
Top

Thats some nice art work you have there!