A forum for general discussion of the game: Open to all punters
Post Reply
124 posts 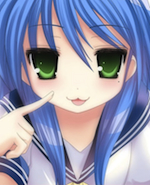 Rin's my favourite because she's the kind of person I'd be fascinated by in real life, and she has zero pretense.

I'm a socially awkward person and I find it difficult and irritating to deal with people who are overly polite, or try to fit in, or aren't open about who they are and how they see the world.

I see Rin as someone who wants to be understood for who she is, no matter how difficult that can be to get across. She doesn't try to fit in with anyone's preconceived notions, she just is who she is.

I don't think Hisao's the right kind of person for her. >.> I like to think that when she's a little older and more sure of herself she'll eventually meet someone she meets minds with better than Hisao.

But I also found her one of the most touchingly unique characters I've seen in ages, especially in something like a ren'ai game where at best one's used to coming across well-written versions of stock characters. Rin's just something else entirely, and it strikes a chord with me.

(One of the reasons I selected was "Dissimilarity from a real-life person I hate(d)", because Rin is just so different from the vast majority of people I find so difficult to relate to for the above reasons.)
Top

Isn't Rin's entire route just her trying to fit herself into the boxes others create for her?
I love the interpretation of Pac-Man where he's a just a lowly worker retrieving golf balls left all over the course by the rich masters and the ghosts are all previous workers who got conked on the head and killed by incoming golf balls in the line of duty.
Top

Isn't Rin's entire route just her trying to fit herself into the boxes others create for her?

She wants to be understood, not to conform, from what I've heard.
"Spunky at his Spunkyest/Spunkiest"
"Tissues to the extreme!"
Top

Comrade wrote:I guess the real reason i like any of the girl is the events during the VN and what we "go through together"

I get what you mean. While i do like Hanako the most as a person, Lilly's route was probably the one that was the most feelsy, especially in the ending, even if it was a more typical plot than Hanakos route.