I'm in love with you, Hanako!

A forum for general discussion of the game: Open to all punters
Post Reply
83 posts

I think a guy named Fluff&Crunch wrote something like that some time ago. (if the threeway you have in mind is Hisao/Lilly/Hanako) Some people started posting M.Bison clips. Others shouted Bullshit. Mileage varied...a lot.
Sisterhood: True Edition. Hanako epilogue I wrote. Now expanded with additional chapters.
Top

However, I think doing it off of Hanako's good end, and it being Hanako's idea is the way that has the biggest chance for success (as a relationship, not a story). And even then it's tough. For it to be a successful relationship, Lilly has to be the third wheel, basically, and I'm not sure Lilly would like that.

If you pull a FluffandCrunch, where Lilly is Hisao's wife, and Hanako's invited into the relationship after kissing both Lilly and Hisao behind each other's backs (IIRC), I think the realistic outcome is that jealousy issues would tear the relationship apart from all sides. I think Hanako would go for it, but I don't think it'd last. 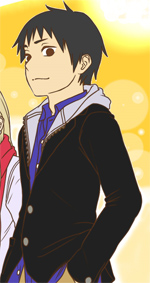 If I was going to do it. I'd just take both Hanako's and Lilly's routes and have the events within run parallel, Hisao breaking his time up between the two, as a friend. Of course, Lilly and Hanako both have feelings for Hisao early on, but each decides to step back, to make way for the other, (which seeing as the idea that one let the other have Hisao has been explored a fair bit, it could be an interesting plot point). This leads Hisao to spend his time mewling over his feelings for both girls, and be as generally incompetent, indecisive, and passive as he usually is.

That'd force both girls to individually try and sway his feelings to the other girl, first doing stuff like asking him how he feels about the other girl, and trying to put them in situations where they're alone. Then, of course Hisao would continue to be oblivious, so the girls would have a conversation (started by Lilly) about how they felt about Hisao. Both would deny their feelings, obviously. At this point, they're close enough to Hisao that they both actively start trying to seduce him, subtly of course. By which I mean, Hanako shows up for sloppy, drunken sex, and Lilly invites Hisao to her room for a tea party for just the two of them. Or something along those lines.

Now that it's really obvious that they both like him, (and I mean really obvious, dumb bastard), Hisao decides he won't let himself come between the two, and breaks it off with each of them individually. Sacrificing his happiness for theirs.

This breaks their heart's, and Hanako goes to seek comfort from Lilly. Here, they find out that the other slept with Hisao, and have a massive fight. Lilly blames Hanako in the heat of the moment, saying that she was willing to step back to protect Hanako's happiness, and if Hanako hadn't been so timid this wouldn't be a problem, at which point Hanako shouts at Lilly, telling her she doesn't need a guardian, she needs a friend. The friendship balance shifts back to equal between them, and they become closer for it. If there was to be a purely lesbian scene, it'd be here.

And finally, because of Hisao's selflessness, and his indirect repairing of Hanako's and Lilly's friendship, they both decide that it's clear he loves them both deeply, and equally, so they can share him. Hot, girl on girl on guy, cripple on cripple on cripple, bacon on tea on hnnnng, action occurs. The end, everybody is happy.

Except Shizune. She gets nothing.
I write, you read.
Sound good?
Top

Guest Poster wrote:I think a guy named Fluff&Crunch wrote something like that some time ago. (if the threeway you have in mind is Hisao/Lilly/Hanako) Some people started posting M.Bison clips. Others shouted Bullshit. Mileage varied...a lot.

Yeah, I saw that a few months into my work and got really scared. Luckily it's nothing like mine. The actual sex scene he wrote for it is hot as fuck, though, I must say.

Never said it was healthy!

Nope, not doing any of that!


I think the realistic outcome is that jealousy issues would tear the relationship apart from all sides.

This is generically true for all multiway relationships. But luckily for me, this ain't reality, so I can provide at least one happy ending that would never really happen. And a lot of others.

Whoa. Kinda weird from Akira's point of view. Can you imagine being 25 (well out of college) and involved with two 18-year-olds (high school seniors)?

Hah, yeah. Doesn't seem hard to get Hanako into unhealthy relationships. But just imagine when Shizune finds out. Hoooo boy.

Lucky for me that's not the way I went, or I'd be mad you spoiled a good story.

I'm glad no one has hit upon my idea (such as it is) yet; having said that, pls stop u guise, srsly cuz yer gunna figger it out eventually and ruin it!

Whoa. Kinda weird from Akira's point of view. Can you imagine being 25 (well out of college) and involved with two 18-year-olds (high school seniors)?

I didn't say it would happen during the events of the VN...

And even if it did, the Hanako/Akira dynamic is healthier than the Hanako/Lilly dynamic, I think.


Atario wrote:I'm glad no one has hit upon my idea (such as it is) yet; having said that, pls stop u guise, srsly cuz yer gunna figger it out eventually and ruin it!

bhtooefr's one-shot and drabble thread
Enjoy The Silence - Sequel to All I Have (complete)
Enough is enough! I have had it with these motherfucking zombies on this motherfucking forum!
Top

Hisao reveals that his Swaggervest has the power of hypnosis.

Pls no.
I write, you read.
Sound good?
Top

Atario wrote:This is generically true for all multiway relationships [in cultures that are prone to possessive jealous bullshit].

Fixed that for ya.

And good luck, you'll need it!
<KeiichiO>: "I wonder what Misha's WAHAHA's sound like with a cock stuffed down her throat..."
<Ascension>: "I laughed, cried, vomited in my mouth a little, and even had time for marshmallows afterwards. Well played, Xanatos. Well played."
<KeiichiO>: "That's a beautiful response to chocolate."
Top

Wow, just found this thread. This is really something interesting to consider. In my tired mind, I can't ponder it well. But yeah, definitely a "I'vegottogodosomething!" moment. And you'd most certainly have to take other factors into consideration. For one, I doubt some guy would just be a "secret admirer" from afar and foster a flame for Hanako without really getting to know her. So the thing to consider is her relationship to said boy. Are they already friends? Cause I doubt it'd be some stranger to her.

Hanako's not the kind of girl that very many people would admire secretly. That's just the hunch I get. Not cause of her fault of course, but just cause of how people are. Even Hisao's initial reaction is "She has a very nice body, but the face..." Know what I mean?

I'm going with the statement of Hanako running away, then telling Lilly some time later, then Lilly deciding to intervene and speak to said boy. Sort of like how Lilly randomly asks Hisao if he considers Hanako a friend. Of course, Lilly's slip of the tongue in "Faraway Presence" would be an obvious sign to me, and something I'd have liked to hear were I in Hisao's shoes. I'd be all like, "She does... what? She does really care about me? She wants to be my girlfriend?" Heh. There's obvious signs all through the story. The Master of Romance has to take his time getting over his own past issues though.
Top
Post Reply
83 posts