A forum for general discussion of the game: Open to all punters
Locked
56 posts

I didnt really want to come on here today on such a bad note, but I feel like I should let everyone know whats going on since Ive seen a few people worried about her inactivity the past few days and I shouldnt leave you all in the dark forever.

Im sorry to say I have been informed that she is currently in the hospital because of something that happened a few days back with a robber. No other information has been given to me at this time but she is okay and will be back, no need to worry. Her attacker is in custody and will be dealth with, obviously.

You have no idea how sad it is for me to tell you guys this. I nearly burst into tears. We are very close and to hear about this is heart-breaking.

Wha... I don't even have words for this!

But Myshina I wish you a quick recovery, we miss you!
Xanatos I'm Sorry.

I hope you get well soon Myshina

Thanks guys, i will make sure to let her know of everyone who took the time to write her well

Sadly though, it may be worse than I thought. Its hard to tell right now because everyone is so far from each other right now the details are scarce. 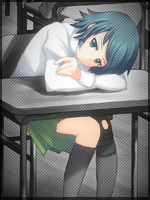 Oh god. I really hope that she gets better soon, it's sad to hear that Myshina has been harmed due to her ex.
Get well soon Myshina, we miss you!

Forget well-wishing for Myshina, we need Condom-In-Jacket's home address so we can deal with him properly - forum style. Tying him to a chair and making him watch cat videos non-stop for 3 days should be a good start. Perhaps follow that with 24 hours of listening to Rick Astley's classic "Never Gonna Give You Up" while we systematically going through and correcting all the grammar mistakes he has ever made while writing a text message, forum post or anything else - making snide comments all the while.

This guy isn't gonna be in his house for a long time...

I think we should focus more on her than that piece of trash. We shouldn't put our time trying to punish someone who will get his and think more about who's in need.

And don't worry, I have something special planned foe Myshina

That's a real shame, I hope she'll be ok and have a speedy recovery.

Edit: Still not sure what exactly happened, so I'll take back my assumption about the guy being disrespectful, but that's not important. What is important is Myshina's health, and I wish for that to be okay.
Last edited by ShadeHaven on Fri Aug 03, 2012 12:04 pm, edited 1 time in total.

dafuq happened
I am a guy.
I sometimes talk like Rin Tezuka.
I am in love with Hanako Ikezawa.

He broke in and whatever happened in there is beyond me but she is in the hospital.

ShadeHaven wrote:No respect for guys with that kind of disrespect for women.

Reading over it, it sounds more like he's mentally unstable than simply disrespectful. What sane mind parks their car outside their pseudo-girlfriend's house and then claims he's not even there because he even likes her or finds her attractive - that he simply needs her to want him.

Narcissistic personality disorder coupled with delusions sounds more like what happened. In which case, my idea of shoving him in front of a crowd and having 40,000 people laughing and throwing sex paraphernalia at him would do one of two things: be completely ineffective, or cause him to have a stroke.

My previous post was an attempt at lightness, really. Having been concerned about Myshina for a few days since she suddenly vanished, I'm merely expressing my distress creatively - which is really the only way I know how.

I honestly don't see how you could joke around about a situation like this but whatever floats your boat.

And we are not here to discuss that fucking twat, so quit it please.

Helbereth I know your trying to lighten the mood with punishments for that person, he will get his just deserves. We do not want the thread to be about that person, this is about the well-being of our friend Myshina.

Sorry to hear that, Myshina. Get well soon

That's fucked up. I can gather what happen from the little details and it just sounds horrific.
Get better soon, Myshina.
http://soundcloud.com/benjamin-a-snow/p ... f-complete
^My hip-hop flip sample of Painful History