I figure I'm a bit of a somewhat hardcore fan because i got a 100% completion on the game.
http://soundcloud.com/benjamin-a-snow/p ... f-complete
^My hip-hop flip sample of Painful History

Where's the option for people who have played one or two arcs and love it so far? That's where I'm at right now, I will probably go for 100% completion eventually though. I'll do the Shizune path one more time after that so I can keep it fresh in memory, I honestly love all the girls but I think love Shizune and Misha the most.

I haven't had any story or group of characters stuck in my head like this since I was a little kid.
Top

I played it and got the good endings and a few of the bad nuetral endings, got to 91 percent....then my computer got a virus and i had to reset to facotory. Decided i wasn't gonna probably play again for a while. Thankfully i had completed all routes before that.

I was a HUGE fan of KS, but i have died down alot. I was obsessed with it, the characters were stuck in my head and i was in love with it, but after i beat it, i moved on a bit, and found something else to obsess over, i think the next was Soul Eater after a friend showed me, and once i did that i moved on to Baccano, and now Rosario + Vampire is what i cant get enough of....im starting to think i obsess over fiction and move on too easily. I still visit here, but am not a huge die hard fan now as i was.....now for Rosario +Vampire anime and manga, i am in die hard mode...once i finish that i think it will be the same as KS, where i move on to something else, but still have fond memories of it and am a fan. 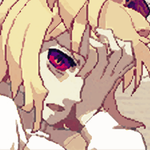 Played through all the arcs once, got good and bad endings, after finishing them all I gave the game a break because too lazy for 100%
Will probably play KS again one of these days.
Top

I only played Hanako's paths. All endings. Would play again.

So far I played the good end 4 times and both neutral and bad once each but definitely going to play them again.

Actually my desktop wallpaper is the scene in her bad end with the text "I know I need help! I know I'm broken! I dont need you to tell me that!" Such a powerful moment <3.

The kind that loves the game (Heck, it changed my life), played through most of the paths (Except Rin's, I think it will depress me.), but doesn't see the point in replaying or going for 100%.
Couchto5k Progress:
Kind-of-complete, increasing speed now.
Top After being emotionally traumatised by Lilly's story, I'd decided to give it some time to savour the powerful feelings I gained before continuing on.

Not because it would seem like a betrayal if I read the other girls' stories, it's because I feel too weak to handle it right now.
Top
Post Reply
22 posts