A forum for general discussion of the game: Open to all punters
Post Reply
443 posts

acewing905 wrote:I wasn't being entirely serious, cause Hanako is pretty cute in the game, but I fail to see how real people can be burnt to that degree and still look attractive. Maybe I'm just a shallow fuck, but then again, this is purely about physical attractiveness.


Well, she doesn't actually appear burnt to a terribly severe degree. The scarring covers a large area but doesn't actually go too deep so the impact on her appearance would be quite less than the usual depiction of such victims. As far as the facial scars, she could cover those with makeup if she chose. The rest...Well, she could cover that too but it'd be impractical.

But I'd still want to see fanart where she screws it up.

@ook: Thanks for reminding me of Yuuko...I hope she gets Tanabata off. She's too adorable not to.

To anyone who doesn't think Shizune is hot, I have one word: "Succession". Aw yeaaah

I was VERY close to selecting Shizune, in fact when I first started playing and I saw her curves and cute face the first thing that came to mind was, "WANT."
Top

Denouement wrote:I was VERY close to selecting Shizune, in fact when I first started playing and I saw her curves and cute face the first thing that came to mind was, "WANT."

Then you saw the Katawa Onsen picture and selected Shizune like the rest of us.
<KeiichiO>: "I wonder what Misha's WAHAHA's sound like with a cock stuffed down her throat..."
<Ascension>: "I laughed, cried, vomited in my mouth a little, and even had time for marshmallows afterwards. Well played, Xanatos. Well played."
<KeiichiO>: "That's a beautiful response to chocolate."
Top

Xanatos wrote:Well, she doesn't actually appear burnt to a terribly severe degree. The scarring covers a large area but doesn't actually go too deep so the impact on her appearance would be quite less than the usual depiction of such victims. As far as the facial scars, she could cover those with makeup if she chose. The rest...Well, she could cover that too but it'd be impractical.

But I'd still want to see fanart where she screws it up.

Not only that but (as far as i know) the vast majority of the truly appalling burn victim photos are from people who got burned with acid or some combination of fire and another element rather than just fire alone. Hanako not only didn't have acid thrown at her face by a fucked up person, but she also had a human shield during the fire.

But yeah, Shizune is way more attractive, i think for me the most attractive girl would be either Lilly or Shizune.
"It is not reason, more or less furnished, but will that makes the world march" 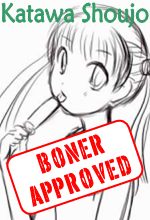 I've already made comments regarding my personal preferences for the girls' looks in another thread, but for the sake of complete disclosure in this one, I'll give my thoughts here.

First place goes to Shizune and Emi. We'll start with Shizune. Physically, she hits all of my "things I find sexy" buttons:

-Short hair. There's something about short hair that makes a girl seem friendlier, more playful, and overall more approachable. The long-haired ones always conjure an image of "high maintainence" in my mind, which I don't care for - plus it's been hyped so much as a Hollywood beauty standard that part of me prefers something different.

-Blue hair. Obviously this is one is purely anime-related, but out of all the possible anime hair colors, blue is my favorite.

-Glasses. TV Tropes has a whole page about this, so I won't bother to go into details - the gist of it is that glasses make a girl look A) smart (always a plus), and B) endearingly vulnerable, which again, makes her more approachable and relatable to as a person.

-Figure. Shizune's figure strikes the perfect (to me) balance of 'slender' and 'curvy'. She's curvy and busty enough to appeal to my...ahem, baser instincts (particularly the 'busty' part - what can I say? I'm a breast man

), but still *realistically* so. Unlike those Hollywood sexpots, her body is still naturally proportioned, without dipping into exaggerated Barbie Doll territory. Her style of dress plays into this as well - her casual clothes flatter her figure, but without whoring it.

-Attitude. Not a physical aspect, but a big part of what makes her appealing. Shizune is the rare individual who is both confident enough in her looks to be unafraid of showing off the proverbial goods, yet is sweet and genuine enough to avoid crossing the line into 'stuck-up hot bitch' territory. She's pretty, and she knows it, but she doesn't flaunt it needlessly, which speaks volumes about her personality and makes her all the more appealing.


As for Emi, she's equally attractive, albeit in different ways:

-Twintails. I'm a sucker for any sort of ponytail-style hairdo, including this style, for a specific reason - it's the best of both worlds. As I said above, a girl with long hair tends to give me a certain vibe that I dislike, but when that long hair is tied back and out of the way, it changes to an entirely different vibe - one I *do* like. To me, a ponytail says "I'm clasically beautiful and care enough about my looks to put forth the effort required for long hair, but I'm enough of my own person to not let that dominate my personality". It's the classic style of the tomboy - the girl who's attractive, but who prefers to let other aspects of her personality speak for her instead. It also tends to give a girl a very sporty, playful aura, something I always find appealing in a lady. Twintails are essentially the 'loli/moe' version of a ponytail, which given her small size is a style that works for her. And speaking of which...

-Figure. This is an odd one - I'm attracted to Emi's relative *lack* of curves just as much as I am to Shizune's presence of them. I've never really been sure why, but for some reason I find petite girls *very* appealing physically - even her small breasts are a turn-on, despite my aforementioned breast-man-ness. Her whole build practically screams 'cute' in a vaguely moe sense, which seems to appeal to me. There's also the fact that I'm not a particularly macho, testosterone-fueled example of the male species - being around petite girls makes me *feel* a bit like I am, even if the size difference is more on her end than anything on my part. And of course, she's hardly *weak* or anything - certainly not the sort of girl who needs that kind of physical male presence (as her storyline clearly shows). But still, it's the psychological aspect of it all.

-Face. Emi is a very emotionally expressive girl, which I really like. Those big, beautiful, eyes...that beaming smile when she's happy...that sad puppy-dog look when she's been hurt, or that "Buh!?" white-eyed expression when she's caught by surprise...that naughty, knowing grin when she's thinking about what she wants to do with you in the storage shed. It seems like no matter what face she's making, it makes me want to grin.

-Butt. Her 'scrap' pictures on the title screen demonstrate this part quite nicely. Dat ass...damn.

The other girls aren't *ugly*, as such, but IMHO they don't quite stack up to my favorites. Misha comes in a close second place; she's much like a more feminine Emi, with a delightfully plump figure and an almost enthralling hairstyle (at least until she gets it cut, which SUCKS). Lilly and Hanako are both pretty is a more classically elegant way - nothing *wrong* with that, but I prefer the more 'playful cute' of Shizune and Emi. Rin is cute too, but aside from the color of her hair, there's not really that much that stands out about her - and her relative lack of a conventional personality to nudge her looks in a particular direction makes her feel rather bland overall.
Now playing: Final Fantasy 14
Charlotte Donnay - Hyperion server. Look me up sometime!
Top

then she would get all my vote.

even though Rin is my favorite character, i would go with Lilly because I like long golden hair.

yep that's pretty much it.
I'd love to lay down and watch stars with Rin...
play Yume Nikki!come on, you know you want to...