The Once Sentence Challenge!

A forum for general discussion of the game: Open to all punters
Post Reply
78 posts


‘Katawa Shoujo' may at first glance appear to be little more than a nostalgic nod, a vintage throwback to the crisp, clipped satire of the anime era. Certainly, this trend of verbose lampooning seems der Produkt des Zeitgeists, rising from the murky depths of the community's reclusive intelligentsia and spreading inexorably into the mainstream. The developers' latest oeuvre deals thematically with Katawa Shoujo's current bête noire, flirting with the very core of the litigious anathema that is anime.

Never before has the evolution of a genre been as conspicuous as this. The developers embrace the reputation that once was shunned and becomes the flagrant enfant terrible with reckless, hedonistic urgency, not unlike a neglected teenager in the throes of unruly adolescence. They face the world with unsettling, anarchic defiance, the explosive yang a stark contrast to the subtle, subversive yin that preceded it - smug in their tangibility, yet internally, furiously voicing the deafening-yet-silent torment against the established ogliarchy.

That is not to say that the developers seek some quid pro quo, appealing to a wider, more interactive market with the shallow, self-serving audacity of our Emins and our Hirsts. This is not solely an exercise in catharsis or a homiletic response to the protagonists themselves, but an allusion toward the evanescent hypocrisy of the wider Gestalt. ‘Katawa Shoujo...’ is in itself a sensitive exploration of the dichotomy of anime's dual purposes, insofar as the authors becomes a farce in and of himself. Cpl_crud stands within the Roman coliseum of our own fretful perturbation, the proverbial Russell Crowe resplendent in battle armour and eagerly awaiting his fate at the temperamental hands of a baying and blood-thirsty audience. He is Brutus, blade in hand, as he looks on dispassionately and proclaims, “None are safe.”

‘Katawa Shoujo’ is at its core a physical representation of the author's inner dialectics, juxtaposing vivid language and a playful predilection toward the thesaurus with the cold, utilitarian steel of a compromised moral landscape. It is something self-referential and stochastic, recherche yet not entirely beyond our reach, and the discordant, coarse recitations of the main character and the eidetic language revel in the abhorrence of humanity: the grotesque, the lewd, the obscene and the visceral. Immediate parallels can be drawn with the Dadaists and the warped surrealism of Salvador Dali. Like his aesthetic predecessors, the developers take what we as mere mortals consider objective truths and metaphorically melts them across the branches of great, bare trees - symbolic of our own twisted Schadenfreude - with the emblematic candles of our own fickle subconscious.
Top

I appreciate the way you judge our personalities off of one comment. How astute of you. Also, I believe you misunderstood the purpose of this thread: to describe this VN in one sentence. Nice try though, you were so close. Maybe next time

How about "Why are the drills gone?" (swagger drunkedly)?
elektronika

Anyway, there's no way I could describe what it is in all the words I can type in a week, let alone one sentence.

I appreciate the way you judge our personalities off of one comment. How astute of you. Also, I believe you misunderstood the purpose of this thread: to describe this VN in one sentence. Nice try though, you were so close. Maybe next time

Don't get me wrong, sir! The whole post is a joke. I was merely jesting.
Top

A Humbled Fan wrote:Heres my sentence:

The picture more or less describes how I felt trying to compute Katawa Shoujo into one sentence XD
"OH GAWD MY DRILLS"
...What? Not a real quote? Oh well, it's Yipyapper's quote now.
"Google will rule the world soon. Accept them now before it's too late."
~Yipyapper
Top

"It's a dating game made by 4chan about a school for disabled kids where you fall in love with a disabled girl and. . . wait! Come back!"
Top

A Humbled Fan wrote:Heres my sentence:

Same here! Every time I would try and think of something, all I could do was think of that meme

One sentence?
Okay.
"A game coming from a joke, heading into perversion and materialized as emotions."

Yeah, I'm bad at this.
Warning:

myshoesarebrown wrote:So I'm trying to convince someone who's never heard of it to play it?

We both laugh and wonder how anyone could play it. I also laugh on the inside, knowing the other person will now be curious and will search it up on their own time and end up playing it. Several days later I'll pass off some reference to the game, at which point they will wonder if I actually played the game, or if they just misinterpreted what I said. They go insane and explode.

I think we have our winnar. While I don't think its creepy, I like the end goal of sharing the experience of falling in love with disabled girls and-wait come back!
Top

Katawa Shoujo, something that made me cry more then "The Notebook."
Shut up heart! Since when I ever listen to you anyways? .......HHNNNGGG!!!!
Top

I traded my manhood for the feels
Top 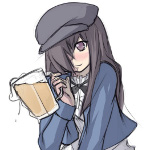 Here's my one sentence: Katawa Shoujo made me sympathize with the characters more than I ever did with any other fiction.