What If Katawa Shoujo Never Existed?

Xaredian wrote: ↑
Mon May 07, 2018 1:55 am
I don't think it has or had anything to do with your experience within literature, but rather that it simply didn't speak to you as much as it spoke to others.

Agreed. That's why I said, if you open yourself to other stimuli, then it gives yourself more chances to be "spoken". As for me, while I think I am (mostly) emotionally stable, I still feel touched by many scenes, and they gave me a lot of positive effects. Shizune's route helped me realize my own short-comings; Emi's route reminded me of my health (as I picked up my running habit); Lilly's, Emi's and Hanako's routes told me that in order that others can open up to me, I must open myself up to others. All of these helped me with self-improvement and interpersonal relationships. So I guess it also depends on what angle you are reading the stories.
Tkiss 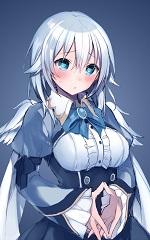 I think I would cry if it never existed

Well, I don't know, it wouldn't exist and so I wouldn't feel like there's a gap in my visual novel experience.. But then, I would have maybe picked up visual novels later on (if I ever did) because the first I played was Everlasting Summer, a VN made by the Russian equivalent of 4chan, and the idea to create that game was inspired by the success of KS (as in, "hey look, the Americans managed to do a good game, channers are not just anons wanking in their basements, they can create something successful, we can do it as well!").

Plus, the second VN I ever played was, well, Katawa Shoujo, so I maybe wouldn't play VNs at all.
Top

and I would likely not have a list of VN's that I'm excited to get into as soon as time allows it - as this was the first VN I stumbled upon after feeling really unsatisfied with how short and inconclusive Doki Doki Literature club was(a game/vn I watched as a lets play on youtube before trying it myself, I never imagined myself being into anything like this and it's blown my mind)
Top
Post Reply
79 posts