Hello. You're not alone.
You know, I've never had problems with my body (Except my height, which I usually try to avoid talking about). My family has a tendency of height problems during childhood, followed by a very painful growth of muscular mass and bones. And for some a weight problem too, but luckily I didn't get it. Not eating healthy and staying up on videogames all day was, according to a height/weight test I did during class, leaving me on my IDEAL weight. I could have become underweight if not for those factors. Crazy metabolism.
But the problem was not my body; It was my mind. The shitstorm of feels I got after finishing Emi's route didn't make me think about exercise for a while. It made me think the usual "Nooo, she's not real, fuck, what have I done in 6 hours etc etc". I got very depressed and angry at myself for staying on video games all day instead of "living" like Hisao did. I spent the next 3 days thinking: Lots and lots of thinking.
On the day after a camping trip with my peers, I went home after a night of being pissed off at myself for not having danced at the party. I've never felt like that before: Suddenly, I was re-thinking everything: Maybe school isn't just for learning and sleeping, or chatting with some friends during lunchtime. Maybe I can enjoy myself there, with those people.
After lurking these forums for a while, I found Couchto5k with Emi on a person's signature. I clicked it, analyzed it.
Then I went to play Mafia II.
The moment I was almost putting the disc in, I thought "What the fuck am I doing now? Won't I do anything to change this?". After some seconds of thinking, I made maybe my most important decision in this month, maybe even this year, I don't know yet. I left the disc lying there for the dust to take, and immediately went to the local park, to try running. I never did run much before that, and when I did I got tired as fuck.
I am addicted to running now, and I am doing so much better. Maybe it wasn't Emi who inspired my running; But it sure was Katawa Shoujo. I don't know what this game does, but it made me rethink everything I done until now. It gave me depression and then enlightned me: All that time lying around crying was sure worth it.
I keep thinking what would happen if I didn't go running that day. It, for me, was the only opportunity I ever grabbed in my whole life. How much time have I lost playing videogames? Did I waste time playing KS? Certainly not. It makes me think: If something so little such as putting a game on a tray could've led me to an even worse stage of depression that day if not for saying "fuck it" and going running, what have I done and didn't even noticed that made me a worse or better person?
Couchto5k Progress:
Kind-of-complete, increasing speed now.
Top

Emotional shitstorm will pass, and you will be able to rationalize it, so the effect is not permament, still there is a chance you will end up with a healthy habit, so rejoice.
Top

I think it is not about the emotional shitstorm anymore, I became really addicted to running. I don't know if I'm addicted to some crazy chemical thing mom said the body releases along with adrenaline, or if it is just because I can get my mind off this constant "thinking" thing when I'm running (Which means maybe I'll stop when the feels are gone, which is sad and I don't want to happen), or if I really like it.
Top

Guest wrote: I don't know if I'm addicted to some crazy chemical thing mom said the body releases along with adrenaline, or if it is just because I can get my mind off this constant "thinking" thing when I'm running (Which means maybe I'll stop when the feels are gone, which is sad and I don't want to happen), or if I really like it.

Well, it might as well mean one and the same thing. As far as I know every strong emotion, and feeling is associated with releasing many different chemicals into our brains, so all the time our own brain is getting high (or low) on lots of different stuff. If you are sad, or angry or choose to play some vidya for six hours straight you feel it nice and rewarding, or degrading and depressive because of those chemicals you produce doing it. You might remember Emi herself admiting it's like a drug to her (or at least it was somewhere in Hisao's constant ponderings). At least running is good for your body too (unless you overdo it).

Am I some weirdo hippy preacher yet?
Top

So, Week 5 Day 3 earlier. 21 minute run. I, unfortunately, did not quite make it all the way

About 12 minutes in, I started developing a stitch in my side. I tried to ignore it and hoped it would go away as I continued to run (I've had the same pain before and it usually dissipates after a few minutes), but by the 16 minute mark, it had only gotten worse, and I couldn't continue jogging. 30-60 seconds of walking allowed the pain to subside, and I was then able to resume jogging for the remaining 3-3.5 minutes. Currently, I'm pondering whether I should repeat Week 5, or declare today's run to be "good enough" and move on to Week 6.
Katawa Shoujo OST Transcriptions and Arrangements: Consolidated list

Why not just repeat day three?
The labyrinth of memories that is killing me
Top

Well... then my week would be staggered -.- But yes, that is a good idea, now that you mention it.
Katawa Shoujo OST Transcriptions and Arrangements: Consolidated list

I'd carry on. I wouldn't have thought that a stitch would be enough to warrent redoing the entire week. It doesn't sound like you were actually slowing down because you were unfit, just you had an unusual cramp. If you get it again next week and it starts to proove a problem, maybe think about redoing weeks. 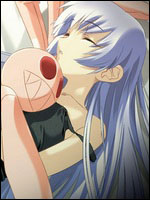 dunkelfalke wrote:Today I had the longest walk of my life. 6.5 hours, 25 km, two mountain tops. My poor feet.

And that distance is only 60% of a marathon.

My avatar is from Muv-Luv.
Top

Well, but the marathon runners weigh only 60% of me, so it is okay