Merloficus wrote: and i just hit the >60 min mark!

As in, you're running for over an hour straight? Or am I misunderstanding you?

But yes, that time there were no breaks. However don't get me wrong, i don't always run like that.

Depends on how i feel, how far i'll push myself. Every other time i run 35 mins nonstop - take a 75 sec break - finish my 10 km's. Been doing this for the last 3 weeks now.
However after this i'll not do the 10km's in 1 go again any time soon, nearly had to puke at the end

Bloody heat probably didn't help much either. Though, i at least had some pride in it when i checked my watch

Will probably go for 45 mins nonstop in a week or 2 for regular runs, working my way up slowly

PS. to anyone that hasn't tried running with music yet, give it a go. Once i started running with it just felt my some new form of energy run through me. Realy improved my performance. Sounds like i'm promoting some new drug lol

Music is a nice thing to add to your running routine, but watch out the rhythm carefully, music can mess up your breathing and heart-beating pattern.
I myself will some day make myself a couple of mixes with ~120 bpm for running and ~90 bpm for walking.

By the way, I do rhythm games once a week - I go to the arcade and rape myself on Pump It Up NX2. My level now is around 12-17 (on NX2 scale) with bar. It's a great way to train your stamina, since twelve 1:40 min songs danced tire me out like no 30-minute run will ever do.
Top 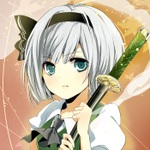 I prefer to keep myself aware of my surroundings while running. I know some songs that match my running speed, so I just play those in my head to both keep my legs in rhythm and to help pass the time.

Normally I'd do DDR/PIU at least once a week as well, but the local arcade closed down some months ago... Trying to "mime" the steps with Stepmania just isn't the same, really.

- My Youtube, used mostly for my Touhou achievements.
- My Skype name is funen1.
Top

I was running for about 5 minutes today, when suddenly I felt my heart aching a little. Ignoring it I went on, but 3 minutes later I understood that I can't run anymore, I can't just ignore the pain. It ended very quickly, I almost dropped unconscious (like in classic NNNNGH!.. macros, but for real). Now I'm lying at the bed, my chest pains echo through me, and I write this post as a reminder that if you ever start to feel your heart aching - stop running at once, do a cooldown lap and walk home.
My body, y u no stronk ._.
Top

In case of heart pain during running: Consult nearest doctor. :O Or have Emi carry you to the nurse.
Top

It's quite hard to do, because every cardiologist in my town that I know is an asshole, who cares less about his patients, prescripting them expensive BAAs instead of normal medications. There is a normal clinic out there, but it's quite far away, and I need 3-4 days to get everything done. And I work full time.

And you should know how it works here: doctor's salary is very small. To earn some money they have deals with companies that produce expensive and useless food additives and BAAs. Doctors prescript those additives to patients, patients buy them, companies give money to doctors for forcing their patients to buy useless seaweed or beeswax extracts 20$ 100 grams or pills that contain nothing but cornstarch, sugar, chalk and stuff like that.
I can't really blame doctors, they have family to feed. But they can't cure people anymore in this situation. And they made Hippocrates' oath.
Top

Wow, this thread is popular! I'm glad to see I'm not the only one who considered an Emi-inspired workout ^^

A bit about why I'm here...
I started working out about a year ago, fueled by... well... a lot of things.
My main problem was insecurity, anxiety and depression over love. I started working out (not just running) to, in much the same way as Emi, escape my problems and try to find a good way to focus on something else-and then I guess exercising is better than drugs right? When running was no longer a laborious task and my body's recovery rate improved to a point where the exhaustion I got from running faded too quickly to provide a distraction I turned to boxing and full-body workouts.
Turns out my problems were just getting started and I picked up the pace around Christmas time. But with exams coming up, the additional work load prevented me from working out and I was forced to stop everything but running regularly for a couple months.

I've been neither motivated to study nor work out since then-save for a couple times a month when I had nothing better to do. But recently I thought back to Katawa Shoujo which I played through sometime between Halloween and Christmas, and it occurred to me that I kind of missed it. So I went and checked on their homepage and hey-new update! Nothing new with Emi's route but I installed it anyway. It deleted my save data so here I am-lucky me I get to play the game from the start AGAIN!

I tried following Shizune's path and it went fine until Hisao went running with Emi. I don't know if this game was made too well on purpose but in that moment I felt horrible for trying to go for Shizune and immediately deleted the save file and started fresh-Emi's route again. I know it's just a game but because it's an emotionally heavy game that gives you tons of feels I guess it makes sense that I felt bad for almost "cheating" on Emi.

I've always thought Emi was the best-clearly has a great amount of motivation and commitment, she's cheerful and looks really cute (reminds me of someone special). I found something familiar with running from your problems (which coincidentally was a big part of her character)-and that stuck with me.

My lack of new sources of motivation (original motivation was my depression from back when I started working out), and the fact that I'm moving away a good long distance (USA->Belgium) has given me the opportunity (although I hate to call it that) to start with a clean slate. So I thought I'd find some motivation-and hey! TADAH!!
After re-playing her route completely I should have something to get me started-and thanks to this thread I now also have something to keep me going! Although I do think I'll skip ahead a bit in the program, something Emi-themed that I love to do anyway sounds good to me!! ^^
I'll keep in mind the lessons I learnt from KS and Emi's route, and I hope others do the same successfully.

It seems that I've recovered from monday "heart attack". I think the fact that I was quite stressed before the run somehow was one of the reasons I had those pains. I feel great now.

And, if no one minds, I will post here every time I return from my runs.
Top

It seems that I've recovered from monday "heart attack". I think the fact that I was quite stressed before the run somehow was one of the reasons I had those pains. I feel great now.

And, if no one minds, I will post here every time I return from my runs.

I have no problems with more updates to check on here. It has been getting more and more infrequent.
Sorry for my grammar and spelling. I am not very good at those...
Top

Hmm... now usually I run for 45 minutes a couple times a week.
And I run quite fast, but I was wondering-because Emi sprints during her competitions, if she is a sprinter or a long-distance? I'm pretty sure I've already answered my own question, but what do you all think?

HurricaneHarvey wrote:I have no problems with more updates to check on here. It has been getting more and more infrequent.

I typically hold off posting my progress until the end of the week, unless something notable comes up. Everyone has their own preferences, of course. But if all goes as planned, my next update will be a big one for me.


Haitaka wrote:And I run quite fast, but I was wondering-because Emi sprints during her competitions, if she is a sprinter or a long-distance? I'm pretty sure I've already answered my own question, but what do you all think?

The events she runs at that one track meet are sprints, but in her route she's shown running at least a mile with Hisao each morning, which is more middle-distance. It's certainly reasonable that she doesn't stick to just one category of running distances, even if her specialty might be sprints.

- My Youtube, used mostly for my Touhou achievements.
- My Skype name is funen1.
Top

Thinking of it, this really seems excessive and egoistic.
Top

Can't help seeing her stumble and fall all the time ._.

I ran for friday today, since friday's weather was awful. But today's was even worse. It was raining, and it was that kind of drizzle with drops lesser than pixels on my cellphone which I saw when I pulled it out to start playing a running mix.
It got a little heavier in the end, and right after I was going to finish my final cooldown lap it started raining like mad. I didn't had time to do the finishing stretch, so I did it at home, drenched to the toe.
I tried to take a photo of a drizzle, but it was too gr1m d4rk to take it properly.
Nevertheless, it was one of my best runs ever. Inb4 I will catch cold Emi-style (which I won't).
Top
Post Reply
2701 posts