i recall kenji saying "If I was going to kill someone, I would throw them off﻿ the roof and make it look like an accident." well with hes ending, i fell of a roof? with kenji their? and it looked like a accident lol
Top

It's just the devs playing with you. Because of the roof accident is why they picked that line.
He has a couple of moments (where he puts off his glasses for example) where he seems a pretty decent guy. Just weird and misunderstood.
"A realist is what a cynist calls himself..."
Top

I guess you kind of missed the point.

The poor guy. After all he's been through, you accuse him of being evil... Take a look through his eyes; eyes that have seen things. A shaman's eyes. Terrible things, that you can't imagine.
Top

Evvinartopski wrote:The poor guy. After all he's been through, you accuse him of being evil... Take a look through his eyes; eyes that have seen things. A shaman's eyes. Terrible things, that you can't imagine.

Like when he made a ship in a bottle and his mother sat on it.
There was blood and shreds of floral print everywhere...


That's what life experience is.

...Well, he does walk around leaving open jars of olives, just to show that he can. That's a little evil
"I’m trying to experience. People probably don’t do this enough." -Rin Tezuka.
Top 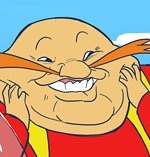 I think kenji is a pretty cool guy, eh dismantles conspiracies and doesn't afraid of anything
Top

Kenji's a pretty nice and cool guy underneath all the insanity. He doesn't even hate all women; just feminists. Non-feminist women are OK to him.

And yeah, the accidental rooftop death line is just to screw with you. In the Kenji ending of Act 1,it really is an accident, since you're both drunk off your asses at the time.
Been a KS fan since late 2010, and am grateful for all the devs do! You guys rock!