INFERTakuya wrote: In any case, inspired by a certain "capturing god" from a certain manga, I'm gonna try for 100% completion without any sort of guide.

Do you mean of The World God Only Knows? 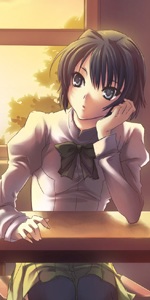 INFERTakuya wrote: I did know that racing her would definitely place me in her route though. Haha. Must have read too many Shoujo manga.

I thought that racing her would be an Emi++, not a path=Emi. I've read some but, I guess, not enough shoujo manga.
Emi > Lilly > Misha > Hanako = Rin > Shizune... I might just prefer women who put out a lot.
Mind-stickiness: Hanako > Misha = Shizune > Rin > Emi > Lilly
Top

Snelx wrote:I was going for Hanako. and 1st played without any guide. (never play demo before)

everything goes fine, u know all the short scenes with Hanako at the first part of Act one.

However, just because i choose to be healthy,
and obey the nurse's instruction to run, by saying Yes.
And trying to catch up to Emi when she tease Hisao during running

I couldn't turn back.
nor even speak to hanako when i saw her in the library in one of the scenes later on during Emi path.

Exactly the same happened to me
Completed:
Emi - Hanako -

Lilly..... then i failed there and went to hanako <.<
''Cheerful disposition, light skin/hair/eyes, poor motors skills, bad balance, short attention span and trouble with words" So... she has a case of moe.
~About misha's disability
Top

I got Lilly's path, which was the path I wanted anyways. And I got the good ending on that path as well. It makes me hesitant about playing the other paths, as I really liked this path.
Top

I did lilly's first she was the character I most liked from all the way back when I first tired the act 1 demo.
Top

I chose Hanako 4-5 times during Act 1.. I just never could pick anyone else back then..

And after I got the full version, naturally I also played her path first.. However, I don't think I even had to say that anymore...

Hanako = Shizune = Rin = Lilly = Emi
I just don't like categorizing people. Even if Hanako will always be the dearest for me, I still prefer if they all get equal share of love.
Top

Decided to get Shizune's Path first, though not sure why. However unlike many people, I say that I rather enjoyed it and think that it was a nice, very subtle story.

Working on Emi's right now and I can appreciate the different tone. Though I am having a minor Kenji withdrawl. And I do miss Shicchan a little

I did Rin first, then Shizune. I thought Shizune's path was alright... Why is it getting so much hate?
Top

I had considered doing Hanako's first, but I made the last minute call to do Lilly's path first.
Top

I was going with the flow, and I ended up drunk with Kenji.
Because I changed one choice, just to see a awnser, and missed to go back, I ended like that.
Then I went back and changed it, and ended in Shizune's Route.
I won't say much about the route itself, but I really liked Shizune's character.And Misha being Lesbian was quite unexpected.
Top 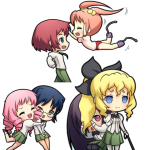 Went for Hanako, ended up going towards Emi.

I realized my mistake about 3 lines in though, and luckily I had saved at that option.

That neutral ending was devestating.
Top

I had never heard of this uhh game? novel? whatever you wanna call it till I saw it on thedailywhat.com about 4 days ago... So I wanted to end up with the shy girl who'd been burned (Hanako) as soon as I saw her. But got roped into doing Emi's path first because i figured it was going to be like mass effect where you could make more than 4 or 5 decisions. Once I finished Emi's path (well technically... I havent gone through and done her good ending.. dont have the heart to) I immediately went through and did Hanako's.
Top

I played this game methodically, according to my preferences (In reverse order) from what I had played in the Demo.

Now, if you asked me if that order reflects what my opinion ended up being...