A forum for general discussion of the game: Open to all punters
Post Reply
4967 posts

Considering that Steam now allows fully uncensored titles as is the case with this visual novel https://steamcommunity.com/games/432100 ... 1080289382 is there a chance for a Steam release of Katawa Shoujo?
Top

A silly question for Aura, if he finds the time: 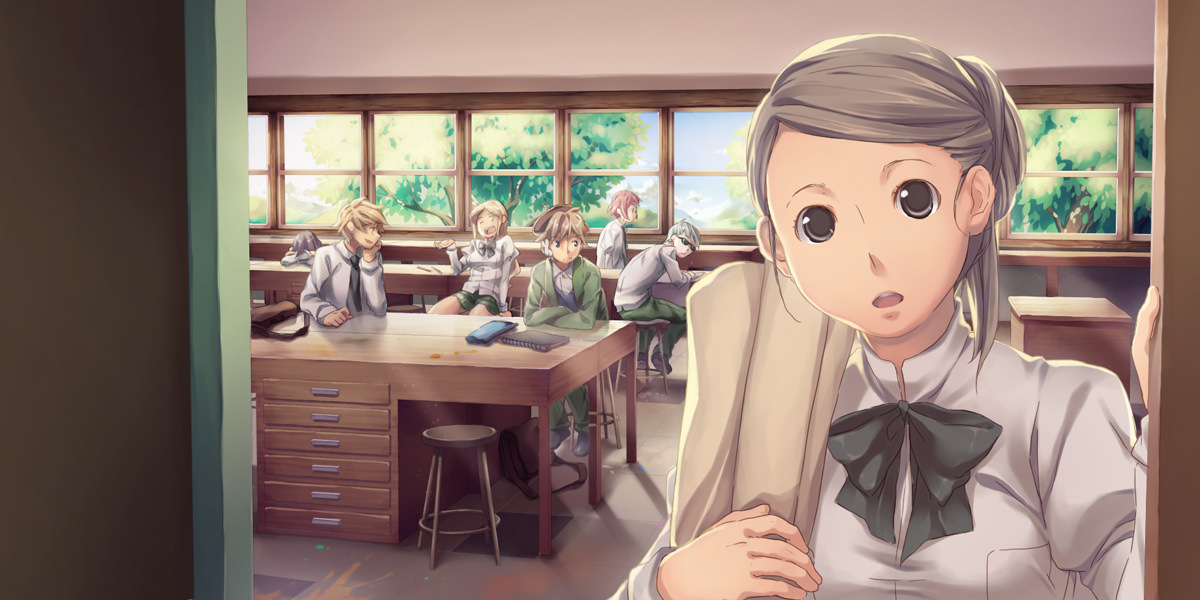 It's pretty much accepted "fanon" at this point that the blonde girl in the background of this classroom CG is Saki. But if you had to give a name to the girl at the door, what would it be? Thanks.
"I wonder what is it about the rain?"
"Everything."
Top

The Shimmie lists her as "Chiharu".
Not Dead Yet
Top

The Shimmie lists her as "Chiharu".

I didn't even know she was on the Shimmie. Thanks.
"I wonder what is it about the rain?"
"Everything."
Top

So I came up with a stupid question. It was so stupid that I wasn't going to ask it but then I thought 'It is Kenji...'

Something that always stuck with me as a odd detail with Kenji was Hisao's mention that he (or his room) reeked of garlic. I don't know why but to this day I remember that particular detail. Now it might just be that he likes having garlic to his food but this is Kenji we're talking about here, nothing is quite as it seems with him.

My question is, does Kenji believe in vampires? Or does he think the garlic will keep girls out of his room?
A good writer knows his limits. A great writer finds ways around them.
Top

Or he could just be Korean. Buuut, definitely not Italian. Nope, not that.

Is it some cultural pun or joke?
A good writer knows his limits. A great writer finds ways around them.
Top

It's not definite, but it could be. Try looking up "garlic eaters". The rest is left as an exercise for the reader.

He also eats a lot of pizza and steals books from the library. Definitely some Italian influence there.

what happend to mishimmie, it's been days unaccesible, did you decided to shut it down definitively or it is just going to have a prolonged maintenace?
Top

AnotherMMD wrote: ↑
Sun Jan 27, 2019 6:59 pm
what happend to mishimmie, it's been days unaccesible, did you decided to shut it down definitively or it is just going to have a prolonged maintenace?

The server that was hosting it kicked us off for some reason.

I think someone backed up all of the photos and some of the files.

Since no-one else is volunteering I'm going to see if I can remember how to host a website and then move the files across there, but I haven't done that in years so you'll have to bare with me whilst I remember how to Internet.
My Novel - Now available The Zemlya Conspiracy
Blog: http://cplcrud.WordPress.com

Have you got the image metadata (source, tags, comments, etc)?
I was thinking of scraping the most recent versions of what I could from archive.org, and possibly making a local (open source) shimmie viewer/searcher if not a website myself (although a website is unlikely from me because I'd have to host it from home).
I'm just wondering if I still need to scrape it myself or not to retrieve it.
archive.org has ~39000 saved URLs, there's a pretty good chance at recovering all tags and much of the other info.
Top

Yesterday, I noticed that there came out a new page domain for shimmie, but it said that the website is still not uploaded.
At approximately what time will it come out, or is the preparation taking long time to finish?
Top

I just realized something... Kenji's disability makes no sense! If Kenji is blind, how did he get to the roof without guidance? How did he steal books from the library? Locate a good hiding place where he could stash them? Unlike Lilly, he doesn't have a cane or a service animal (RIP Niji), or a Hanako, so how does he find his away around school if he doesn't have a clue where anything is? On the final day of Act 1 he tells Hisao that he's only "legally blind", but then later, at the Manly Picnic, proceeds to brag about how his mom sent him some "expensive Single Malt". So you know, he says some shit. Grains of salt are taken.

There's a scene in Shizune Act 3 that, to me, suggests that he gets along just fine despite (supposedly) only being able to recognize things an inch in front of him

ke "Maybe for you; I go beyond the impossible all the time. Okay, whatever, now I'm thirsty too. I'm going to get my own juice, I'll be right back."

"He does come almost right back, so quickly that I suspect he knows about my secret vending machine."

ke "I got you one, too. Hope you like grape juice. We're even for the pizza, now."

Not only was he able to quickly find his way to Hisao's secret vending machine and back, but he was able to correctly identify the grape soda button.

And then a little later in the scene, he's sitting across from Hisao while knocking back a can of soda when this happens:

"I spit my drink all over the book I'm still holding, damaging it beyond any hope of repair. I quickly check the back and see its suggested retail price is 7900 yen. I think I might have a heart attack."

ke "Wow, destroyed. Shouldn't have done that, though, they take vandalism super seriously here. You're gonna get caned."

How would he know the book was destroyed? Hisao doesn't even mention that he was reading a book, and it's not even implied that he's very close to Hisao.

It gets even harder for me to take his legal blindness claim at face value when I think about how he and Yuuko were once an item. Nervous, neurotic Yuuko, leading a blind boy around when she already has so much to deal with? I'm not buying it. So to all the devs that wrote for Kenji, and especially Silentcook, what is Kenji's condition, really? Was he really conceived as being virtually blind, or was his poor eyesight played up for comic effect?
"I wonder what is it about the rain?"
"Everything."
Top

"Legally blind" is not the same as completely blind. Kenji can see. He just has really really poor vision.
Not Dead Yet
Top
Post Reply
4967 posts