Yes, it says so in the bottom right.

It says so in the bottom right corner so probably.
<Aura> would you squeeze a warm PVC bottle between your thighs and call it "manaka-chan"
<Suriko> I would do it if it wouldn't be so hard to explain to my parents
Top

That enite chart is fake dude, all of those "Animes" are actually Manga and VNs never made into an anime for numerous reasons.
== Cyclaptop [~Cyclamate@86.90.200.214] has quit [Client Quit]
<MishaBot> Aww... I miss Cyclaptop...

That entire chart is fake dude, all of those "Animes" are actually Manga and VNs never made into an anime for numerous reasons. 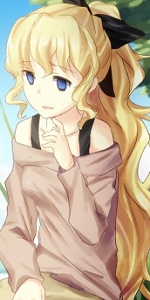 Why is that that Lilly is said to be 'very tall' or even 'amazon', while according to the official site she is only 171 cm tall? I am not saying that is short, probably above average, but it's nothing that unusual, is it?

I wouldn't go and call a girl very tall, let alone amazon, unless she were like 180 or taller.
Top

It's still a little big for a girl in Japan, and many nicknames are exaggerations, right ?

She is tall and voluptuous for standards of this country, so she is nicknamed the "amazon"
"With my eternal life, I will see the world through to its end. Until everyone who won't like me is gone."
— Porky Minch

Exactly. Per Wikipedia, average height for Japanese females is about 158 cm, so that would put her at 13 cm (or about 5 inches) above average height. In the U.S., the equivalent would be a girl who's about 5'10".
Rin is orthogonal to everything.
Stuff I've written: Developments, a continuation of Lilly's (bad? neutral?) ending - COMPLETE!
Top

Why are the white canes so short? In Lilly's sprites, it looks like the cane is barely waist height, and in the art class CG, Sunglass Boy's cane is also abnormally short.
The ultimate KS personality quiz
Top

Notguest wrote:Why are the white canes so short? In Lilly's sprites, it looks like the cane is barely waist height, and in the art class CG, Sunglass Boy's cane is also abnormally short.

I can't exactly speak for the Devs, but my guess would be "That's just how the came out".

I doubt cane-length was detrimental to the plot

Some things are because they just are.
Like stupid, silly doodles with no point? You've come to the right place, friend :^)
I also occasionally write oneshots. Why not have a skimread?
Miki fic? Miki fic!
---
"We are a small country full of the most stubborn bastards on the planet. You might want to rethink your actions." - Anon
Top

It's stated that the canes are retractable, so one could argue that they're not fully extended in the in-game graphics.
Sisterhood: True Edition. Hanako epilogue I wrote. Now expanded with additional chapters.
Top

Kibaro wrote:how come some 4LS dev's are still on the KS forums after so much time after finishing the game? im guessing the forums is mostly a pain in the arse for you guys, having to tame ppl like me and others from doing stupid stuff. but what made/makes you want to keep on going with KS( even in forum form ), i know you didn't hate KS despite the headaches it gave you but from what i gathered(but i might be wrong) you guys were really happy to have finished it and forget about it as soon as possible being fed up with it after so many years of developing

I have only recently discovered this the other day.
At work I occasionally receive thanks. When I left my last job my team made me a trophy that I still keep in my desk.

But that is nothing compared to the overwhelming number of messages that I have received from KS fans thanking me for my part in the game.

It has inspired me to keep writing regardless of my workload, and also to come back here to revive myself.
My Novel - Now available The Zemlya Conspiracy
Blog: http://cplcrud.WordPress.com

YutoTheOrc wrote:I know that Lilly and Shizune are cousins, related by their fathers, but why do they have different last names? I mean if they're brothers shouldn't they have the same last name either Hakamichi or Satou? Either could always have taken the wife's last name, but that's not a typical thing. I haven't encountered why in either the game or the forums. So I thought this would be a good topic to discuss. I'm guessing one of them changed their name due to reasons involving their family feud(not the one with Steve Harvey

Actually a husband taking his wife's name is not uncommon in Japan.

I have one friend who has done so, and considered it myself for a time for ease of visas etc...
My Novel - Now available The Zemlya Conspiracy
Blog: http://cplcrud.WordPress.com

Broomhead wrote:Is there an official map of Yamaku and the surrounding area, or a rough description on paper? I never could figure out where everything was in relation to each other, so I just kinda guessed the classes were smushed between the Dorms and nursing building, the dorms further being flanked by the road, while the nursing building was next to Rin's Forest.

There is a 40Gb HDD in a secret compartment in my desk that has scans of possibly the only thing that came close to a map.
My Novel - Now available The Zemlya Conspiracy
Blog: http://cplcrud.WordPress.com

Zykes wrote:I've been curious for a little while, and since the topic of the license has come up recently, I'd figure I asked.

I get the major point of how the license works, but I've wondered about where that eventual line is drawn between Derivative work and similar concept is.

For example, would any type of story that is based on a school that partly or mainly focuses on assisting those with physical disabilities fit into the license, even if locations, other detailed concepts and so on are completely different from KS.

I think a recent thing that had this was with two movies. White house down and Olympus has fallen. They are pretty similar in concept but are different movies.

With something like that, would it be against the license or not.

Copyright law is really weird in this respect.

I hindsight I wish that I had written my own licence... With the knowledge that I learnt 2 years after KS...


In essence, a derivative work uses a significant portion of the original work.

So if you copied 14,000 words of the scipt or some of the art, that is a derivative work.


However, ideas aren't covered by copyright.

So if you use the setting of Yamaku then that is a similar idea, but not a derivative.

I suggest Shane Simpson's "Music Business" as a good text on the topic
My Novel - Now available The Zemlya Conspiracy
Blog: http://cplcrud.WordPress.com