They're all great tracks, but I think "Ease" is the one I like most right now. That synth-accordion is just a really nice touch of instrumentation.
100% completion!
Whatever you do, be safe!
Top

That one part in "Air Guitar?" Better than Emi buttsex.
Top 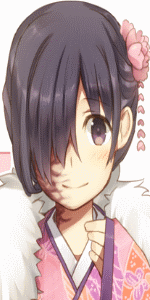 'Love With a Hint of Luck' is my fanfic. I just started with the fanfic business, so don't expect me to deliver professional writing.
Top

Does anyone know the names of the songs in the animated cutscenes? Specifically Hanako's as that one nearly ended me.
Top

All music tracks were sweet and fitting, but the one I like the most is Moment of Decision.
And I would also love to know the song in Hanako's cutscene.
Top

Nurse's theme was my favorite, I'm glad nurse-kun got such a classy track for his cameo in the game.

Breathless was another favorite of mine. I flip on the game and just play that track so I can depress myself for no particular reason.
Top


But overall, I love the soundtrack. I remembered looking around the net for a download of it after playing the demo oh so long ago.

Other than Romance in Andante II, here are some other favorites:

Well, all of them actually. Haha

Glad someone made a thread like this. People who composed the music for the game are unsung heroes of KS. They did a wonderful job.

The music in the second half of Hanako's cutscene is based on Raindrops and Puddles. I couldn't tell what Lilly's cutscene music was based on though. Anyone know? Also, is there anything like full versions of the cutscene arrangements?
Top

IBlameRoadSuess wrote:I'm not really wondering anything about the game itself, but wondering if there were any plans to release the redone soundtrack from the full game.
Would be ridiculously awesome.
*Wants Red Velvet and Hokabi*

But I really do love the whole soundtrack, there might only be one track that I can't stand to listen to, and I'm not even sure what it is. I do love Red Velvet and Hokabi a lot. R.V. feels like a nice club song for obvious reasons and feels oddly relaxing. Hokabi to me just seems like Akira's theme, even if it isn't, it always make me think of her. lol
Fav Characters: Hanako > Lilly > Akira> Shizoon > Miki > Rin > Emi
Fav Character paths: Lilly = Hanako > Rin > Emi > Shizoon

I feel bad for Hanako cuz it seems that she's better off by the end of the game when you pick Lilly's route as opposed to her own.
Akira X Hanako shipper :3
Top
Post Reply
25 posts