I hope nobody has any objections to this.

Also, I suppose it wouldn't be a bad idea to head this thread off with some discussion topics.

1. The ending. I honestly felt disappointed that it had to end so soon, and not just in the "I want more stuff" way. The concept of love had finally been introduced into the relationship (contrary to the whole "protection & liability" thing that had been going on beforehand, which leads to a bad end if you choose to continue it), and visible progress was ready to be made towards Hanako's rehabilitation. And then that's it. We don't get to see how the couple handles the whole "lack of plans for the future" deal, we don't get to see Hanako showing up to class more often and moving past her insecurities with regard to other people (maybe something involving her therapist as well), we don't get to see Lilly return from Scotland to greet a brand new Hanako, and we don't get to see any true loving consummation. I guess part of this is to give players some leeway to connect with Hisao; after all, if he had said in the script that he wanted to be a rocket scientist, that would alienate a lot of players. But some of this is borderline inexcusable.

2. The lone sex scene. I'd like to know if I thought the same thing about it as everyone else, which seems to be something like: Hanako figured this was the only way she could keep Hisao around instead of losing him, and he wanted to connect with her some more, but it turned out to be a misunderstanding, and both ended up regretting it. I wont lie; actually reading the text during that scene was hard enough, and when coupled with the fact that the genitalia was immediately beneath the text box, I ended up skipping most of it. What I did notice, though, is that she didn't seem to enjoy it much. Is this correct?

3. Some things appeared to have been scrapped entirely. I played through the route multiple times, since I was sure that some combination of decisions would give you the option to, well, make some bad decisions when Hanako was drunk. There is also the choice where you can join Shizune and Misha for paperwork, and while watching that scene makes you think that there might be a point when Shizune and Misha actually make amends with Hanako, this seems to be absent.

For the record, I haven't played any of the other routes yet. But that shouldn't matter, as this is The Hanako Thread.
Top

I just played the Hanako route through minutes ago as my first route.

It would not be exaggeration to say I goddamn loved it.
Top

I played the Hanako route first. I got three endings, and I assume that's all of them.

I got the 'neutral' ending first, which was sudden as hell. At first I thought it was the good end, and was about to rage, but then I reloaded and listened to the all wise Lilly. The good end pretty much had me in tears for the last few scenes. I don't even know how to express how much of an effect it had on me. The 'tearing down the wall' scene took me on an emotional rollercoaster like i've never experienced. I'm still a bit shaken to be honest. The classroom breakdown scene had a similar effect. The music as well; dear god, the music.

I went back and got the bad end for completion. I actually thought I was going to die.

Anyway, a side note. One of the most enjoyable parts of this route for me were Shizune and Misha. Misha's joking around at first actually made me quite mad, but the way she takes it back, along with the way those two help Hanako was something totally unexpected and lovely. As was Yuuko.

I'm so glad I chose that route first, even though I haven't finished any others. It'll always have that lasting effect on me, I think.
Playing through Act 1 again and seeing Hanako as she was with the knowledge of what I learned in her route is a really powerful thing.

I'm sorry, I don't know who wrote her path, but you have my greatest respects. Thank you.
"Leo Burnett and 4Kids are the devil!"
Top

Referring to point 1: I feel that this ending would bring the most satisfaction overall for more readers, as confining their future to a single ending would be far too sad for all the readers here who can clearly imagine a wonderful (or maybe not so) future for them already. I personally don't really mind them ending it at that point, but I did want to see what would've happened to the whole Hanako-birthday-freeze deal.

Otherwise, I feel that the route as a whole was well-executed with the sole exception of Lilly's absolute disappearance from the final few scenes. It reminds me strongly of Mio's route from Little Busters!, with the entire flow of the plot, the changing emotions, etc. Kudos to the writer bringing to life a brilliant Hanako-Hisao relationship and showing us a really REALLY realistic relationship.

Re1: I felt this was the perfect place for Hanako's path to end. After all her the main plot point has been resolved, and everything else would have been more or less an extended epilogue.

Re2: Yes, this is correct, and I thought it was a refreshing change to the typical cliché that all women just have to love having sex with the main character. Yes, the scene was hard to read, but the resolution when we learn about Hanako's true feelings more than made up for it. It was one of the strongest scenes in KS.

Re3: I think that was an intentional attempt to mislead the readers, and I'm glad the clichè of abusing a drunk girl has been avoided.
Also I liked Shizune and Misha more in Hanako's and Lilly's paths than in their own^^°
Emi > Misha > Hanako > Lilly > Rin > Shizune

Hanako's path was heart jerking, emotionally jarring, and I loved every second of it. My reaction to the end was thus, "Wait it's over? No.... No it can't be over! *Insert Vader NOOO! here*"
I honestly wanted to see Lilly's reaction to the relationship....... Ah well it's more than likely that moment was the perfect place to end it. I just feel so sad when I think I'll never see more of Hanako's now seemingly brighter life... I don't expect to get over this either.

It's kinda funny, I've played a bunch of VN's and for the first time I'm feeling apprehensive about going down another path. I'm thinking weird crap like how will Hanako ever be happy if someones not there for her....... If Hanako's writer reads this I want you to know that I thank you for giving me this wonderful treasure.

But alas I was told Lilly's path will also make me curl up and cry manly tears so off I go!

DearFear wrote:It's pointless. I finished Hanako path and it was awesome! I wanted more and more of it, but there was none(i heard Hitler wanted more to). I decided to try another path. It was pointless. All i could think of was Hanako. Right now i feel a mix of rage,joy and desire.
Good work ppl! 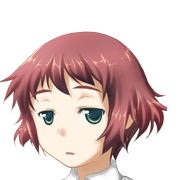 Rykn wrote:I't's kinda funny, I've played a bunch of VN's and for the first time I'm feeling apprehensive about going down another path. I'm thinking weird crap like how will Hanako ever be happy if someones not there for her....... If Hanako's writer reads this I want you to know that I thank you for giving me this wonderful treasure.

Ah, just finished with the good ending. Man tears all around.

First off, thanks to the 4LS team, this was the only and may be the only VN I ever looked forward to releasing, nonetheless my first one played.

Originally I got the bad end for Hanako, that was a real heartbreaker, getting the good ending now just makes it even worse for me. I need some tissues.


I have thoroughly enjoyed KS! Now for Emi's path.
Top

What exactly is the bad end, and how do you get it? I got the end where You just play Chess with her after not heeding Lilly's advice, And the good end, but I still have one scene in her path that I haven't unlocked yet, and I'd like to get that before I try to move onto the next path.
Top

To get to the bad end you: When lilly/lily leaves, select to go back home/end the day, etc. Then agree with Lilly's advice on the phone.


What happens in the bad ending: After following the two above options, you go to Hanakos room. It is the day before or on her birthday and you ask if she is alright at her door. You get no reply but eventually she unlocks the door to show she is listening. You see if she's fine, then ask her if she wants to go somewhere. Hisao keeps pushing going somewhere, and she snaps and yells at hisao to get out, etc. You then leave, close the door, and credits roll after a small narration.
Top

Somedamnguy wrote:To get to the bad end you: When lilly/lily leaves, select to go back home/end the day, etc. Then agree with Lilly's advice on the phone.

Are you sure about that? I think you have to choose more than one bad choice to unlock the bad end and I'm pretty sure you have to ignore Lilly's advice to even go to her room.
Emi > Misha > Hanako > Lilly > Rin > Shizune

Almost positive that's how I got to it, unless I accidentally selected the own judgement option
Top

Nah, You're right, I did the same thing and got it. Thanks. Now I can move onto my third path. I went through Lilly's path before I realized I hadn't completed Hanako's the first time through.
Top

Well, damn. I didn't expect Hanako's route to be this good. I mean sure, I expected to be interesting, just not to this extent. I love how Hanako was able to muster enough courage to finally kiss Hisao in public. I loved every bit of her route, especially the billiard and the good end CGs.
Top
Post Reply
642 posts