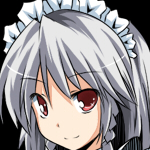 I ended up with Lilly, and I recognised I was heading that way only very near the end of the demo (2nd or 3rd last decision).

Lilly and Hanako would be the types of girls I would be most interested in irl, so I guess it makes a certain amount of sense.
Top

Hanako, she's pretty much exactly my type though, so I wasn't all that surprised.
Top

Ok, i'm sure now that there is no such thing as a natural choice.

You see, I got Emi making the choices I usually would. It was alright, I was kind of expecting that, but when the plot was made more intense, I found myself hating Hisao and wanting to punch him in the face. Even though I did find myself expressing Hisao's emotions physically (when the text read "I suddenly caught myself grinning", I would actually grin), I also would think "Hisao stop talking oh fuck seriously man just shut the fuck up you're not saying THAT are you oh fuck you are. There, I hate you. You don't deserve the girl. Fuck you. Just... fuck you."

I realized that the player's role in the game is none other than the part of the character's mind that tends on making choices based on the girl. You are Hisao's conscience, his lust or something.
While we are here discussing, Hanako is somewhere hopping from dark to darker tiles. Alone.
Top

First i pick the Hanako route. But i end up geting Kenji route....i forgot how to get Hanako route on act 1.

Second try, i pick Hanako once more and i did the right coice without any mistake, and i get the verry good ending!!!
Whit Hanako give Hisao a present....she kiss him in the publik street. 8D

I got Rin at first. I went into the game wanting Hanako because from reading Act 1 two years ago she was the only girl I liked. I just answered everything "truthfully" as I would have reacted in real life. I don't regret a single moment of getting Rin's route, it was completely amazing. I got her true/happy end without getting stuck in any of the bad or neutral ends. I don't feel like backtracking to do them just because of how amazing her true end was, neither do I currently feel like doing any of the other girls' routes because it doesn't feel like they can come close to how incredible Rin was.
Top

Hanako was my first. I barely even considered my choices(just went with what sounded "natural") and got her good ending.

The funny thing is that I don't usually go for the shy/meek girls in Visual Novels, but I somehow felt drawn to Hanako despite my personal tastes in women. Perhaps it was the strong paternal instinct in me that cried out for me to protect her smile; I simply could not stand the thought of her being sad or crying.As the route ran it's course, however, I found my affection evolving into adoration and then into genuine love. Hanako was so sweet and she evolved tremendously as a person. That, I believe, more than anything else cements her as my favorite heroine in the game. What she did, with help from her friends, took a lot of courage.

We "normal" folks very often take for granted how easy it can be to associate with others in a social setting such as school. Anyone who can find it in themselves to take the steps necessary to do what Hanako did, particularly after major trauma such as she experienced, both physically and psychologically, in my opinion, deserves tremendous respect. Having been the object of bullying in school due to being overweight, I would like to think I can sympathize with her in some small way. I think this is a major contributing factor in my eventual attraction to her as a person and not simply as someone to protect or just a friend to guide towards social integration with our mutual peers. That a game can elicit such a strong emotional response, not only from myself but a multitude of others, speaks of exceptional quality as a story device. Full marks, 4LS!
Top

In my first run-through, i "ended" with Rin, which made me quiet happy, as she instantly struck me as the most interesting girl besides Hanako. If it wasn't for the game-route, but simply how i would act in Hisao's place, i would run after Hanako probably, as i'm pretty much the protector-type (with "protector" being also the literal meaning of my name, ha!). Then again, my ex-gfs. remind me on Rin altogether, all being artists with tendencies to self-destruction and an illogical yet philosophical stike.
What that says about myself? A protector choosing to protect a girl who will eventually destroy herself over a mere thought or feeling? Well, either i simply dislike easy tasks, i just suck at protecting, or i'm a masochist. Take your pick.

btw. my least favourite choice and my last path (besides Kenji ^^") would be/was Emi...
Top

I got Hanako's path, and it fit me pretty well (not perfectly, of course, but the only really glaring diversions I noticed from what I would have done were that I don't drink and that I would have talked things out with Hanako instead of...I'm not sure if we're allowed spoilers in this thread, but you can probably guess the particular scene I'm referring to).

I'm now working on Shizune's path, though, because a powerful, dominant woman...well.
Top

I actually got Hanako on the first try. I don't like shy VN heroines at all - but I nearly shed tears.
Top

I played straight through the first time. No changes in decisions, no save states. Ended up with Emi. Perfect ending. Amazing. It just came naturally too.
I lost a parent at a young age, not as abruptly as Emi, but still knew the feeling of losing a loved one, hiding it, working hard to stay strong and just leave things behind (she by running, I by focusing on work and school)... and especially pushing others away to never lose someone close again.
Amazing, simply amazing.
I think this VN matches your IRL personality based on the decisions you make in the game. Logically, I know not really though, and it's a path based on choice, but the writers made their paths and choices really well thought out.
Top

I think I would also simply love Hanako. That I feel like is where my next ending is going, we shall see!
Top

Tried to get Rin the first time, got Hanako's path.

Wasn't disappointed. Hanako's the gal for me.
HERRO
Top

Naturally got Hanako. Thought she was amazing.

Then I met Lilly.

oh god i'm so lonely ;_;
my heart, it's cold and dark
oh god why ksdevs why

The very first time I played Act 1, I got the Rin ending. The second time, i fell off the roof.
Top

Jintor wrote:The very first time I played Act 1, I got the Rin ending. The second time, i fell off the roof.

That's exactly how my first experiences with act 1 so long ago went. A friend of mine who didn't really know anything about VNs before was with me most of the time, and proceeded to refer to all bad endings in VNs and "roofdead", one word, in a very deep voice, as in, "Dude, I got roofdead again!"
Top
Post Reply
201 posts