If you are insane you can try it.

Writing KS has sullied my ability to write fiction forever. Now all I can think about is High School romances. Sure, they might have explosions in them, but they are still high school romances. You can say that they are in university or whatever, but the plotline is insane.

If you want to nuke your chances of being able to write ever again, maybe give it a shot.

Edit:
A little more negative than I expected there.

Your idea isn't bad; but I would suggest writing something that you want to write, rather than copy what we did.
Or at least go out of bound enough that you are exploring new territory.
There's a tonne of fanfics on the forums here that do that well. Some do it not so well.
My Novel - Now available The Zemlya Conspiracy
Blog: http://cplcrud.WordPress.com

If it wasn't for trying things out and getting experience in fan-fiction first, I wouldn't be motivated or confident enough to write anything at all. At least a couple on the forums moved on to focus on their own ideas.

Sorry for using this thread to ask, but it seemed relevant to something I've been thinking of.

I have a bit of trouble understanding the Creative Commons License. Am I right on the following points? (In no specific order): So let's say I wanted to make a free webcomic, giving credit that I was inspired by the game by 4LS, that is set in Yamaku a year before or after the events of the game featuring original characters. But because it's still set in Yamaku, would I still be breaching the license?
Top

But you may ask for permission, and we might give you a permission. We've done it many times before for various things.
<Aura> would you squeeze a warm PVC bottle between your thighs and call it "manaka-chan"
<Suriko> I would do it if it wouldn't be so hard to explain to my parents
Top 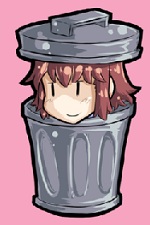 Yamaku's such an interesting setting. Good thing fanfiction's allowable under the license (I imagine, given the presence of a fanworks board here); it's a rich opportunity to raise awareness about disabilities of all types, just like the game itself.

On a more topical note: the calls for expansions and suchlike are because people don't want to consider that, once the full game's released, there won't be any more KS forthcoming.
Top

Yamaku is a not-so-good implementation of a potentially interesting setting concept. I somewhat often assert that it should've been a Russian orphanage instead of a Japanese highschool to make the point more tangible. I think technically the licence forbids fanfics too but we obviously don't mind.

But basically, I feel that stories follow a law of diminishing returns. Think of KS as a glass of water. You're really thirsty for water, so you drink it. As soon as you're finished, another glass of water appears in front of you. It's not as appealing, because you've already satisfied (a part of) your thirst by drinking the first. I know that there are people who LOVE reading those awful Star Wars expanded universe books and stuff (maybe these are the same people who'd love the idea of KS 2 through 5?), but uh, I don't know. It just doesn't make sense to me, but then again I've never been a fan of anything. Maybe I lack the mindset.
<Aura> would you squeeze a warm PVC bottle between your thighs and call it "manaka-chan"
<Suriko> I would do it if it wouldn't be so hard to explain to my parents
Top

I read the EU books until the Yuuzan Wong appeared and stuff started to get silly...
Whether or not something deserves a sequel depends very much on the work in question and how it was ended. I would be interested in reading more stories about the KS-characters, and the Fanfiction board is proof that the setting can play host to many other stories, but I don't think the VN format would be right for a direct sequel, and another VN with different characters would be just derivative.
So I'll be content reading the surely to be plentiful amount of fanfiction and maybe drop in a few pieces myself

MrKnives wrote: how the hell did winter extend to february? O_o, is the global warming so grave?

February is the DEAD of winter in the Northern Hemisphere! Where do you live that you have trouble understanding that? I live in Michigan where we run the risk of snow from late September through mid-April, so having a frozen February is just as normal as things falling to the ground when dropped, but even here I can understand that in Australia Christmas is a Summer holiday...
"There are worlds out there where the sky is burning, and the sea's asleep, and the rivers dream; people made of smoke and cities made of song. Somewhere there's danger, somewhere there's injustice, somewhere else the tea's getting cold. Come on, Ace. We've got work to do." - The Doctor, Doctor Who
Top

Aura wrote: I somewhat often assert that it should've been a Russian orphanage instead of a Japanese highschool to make the point more tangible.

Maybe it is a stupid question, but... Why a Russian orphanage?
Top

I think that's just so the setting is NOT a japanese high school like in three VNs out of four (no guarantee for the statistics involved).
Personally, I don't mind that. The characters more than make up for the generic setting and I think Japan is a more likely choice for a school like this than Russia would have been.
Emi > Misha > Hanako > Lilly > Rin > Shizune