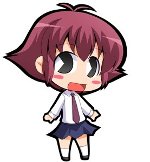 "Damn right! I'm Emi! The fastest girl on no legs!"

Emi is now my favourite.

"I'm having my period and I need some help regarding that. However, I don't feel that our relationship is yet on the level where i could allow you to pull my underwear down in the girls' toilet eben if you offer to."

"..." Shizune
Awesome quote.
But truthfully,
"I was called names by the others, and teased a lot. it hurt... really deep. The teachers tried to help, but they couldn't do much, and even many of them recoiled just at the sight of me... Among those calling me names and teasing me... were the ones I thought were my closest friends."
From Hanako's last scene. Been there before, not fun... especially when you start hearing teachers talking about you when they think your not listening.
Top

Oh man, Hisao in Emi's route is just so funny. He reminds me of my girlfriend.

I think Emi's route will probably be my favourite mostly because it reminds me so much of my relationship with my girlfriend. In fact, I'm pretty sure she's said something like that to me before.
Manual breathing activated!

Nurse: I was busy seducing Hisao. -to Emi Emi route

I pretty much went flat "what" for about 2 minutes and then rolled around in fits of laughter.
Top

[Picking up broken glass is not an adventure.]
Top

Behold thy long post from a random user. But they're all good quotes.

WHYYYY did nobody mention this one?!

Kenji: "This is a manly picnic. No glasses. No napkins. Whiskey only. The beverage of true men."
(Act 1 - The Deep End)

I mean, this is THE quote, come on. A thread about quotes without the manly picnic? You all still have much to learn.
Well, I'll forgive you all for the time being.


Hisao: "Yes, I should have known. Maybe that's why they put that microchip on me the next day."
Kenji: "So... the rumors were true."
(Shizune's Act 4 - The Summit)

Hisao (narrating): Saturday. My second most favorite day of the week.
This is almost entirely due to the fact that it is the day with the second least amount of school, with class ending at the beginning of lunch.

I open my door confidently, myself being more than confident of being able to get enjoyment out of the fine weather and shorter class lenght.
I confidently stride down the hallway and down the stairs to the lobby of the male dorms.
I confidently look behind me to see whose steps are approaching.

I... lose my confidence in this day being enjoyable.

This quote, specifically, made me shed manly tears. A worthy opponent to Lilly's ending!.. ok, not really.
[/Kenji]

If I said this quote defines Emi, I'd probably not be too far off from the truth. In fact, she's probably referring to the implications of the quote when, near the end of her storyline, she fights with Hisao and says, "do you have any idea of what I went through?" or something around those words, don't you think?


Shizune (speaking thru Misha): "If you value something, you fight. Struggle is proof of precs- preciousness? I think so, at least. Or~! You concede immediately~! Since it's so precious that it stops your thinking. The first is a passionate love. The second is a gentle love."
(Shizune's Act 2 - Advanced Game Theory)

I was really disappointed to see that Shizune's route only has a single choice. Otherwise, this would probably be as determinating as an "advice" on what to choose as Mutou's piece of advice in Emi's route! We're all scientists here, after all <_<. At any rate, if you extract only what Shizune said from the quote, you really get something close to a definition of Shizune's ideas, too. I really like how pieces of dialogue that are supposed to be almost smalltalk in this game actually hold nice meanings, just like the whole "keep moving" deal. "Attention to detail" is an understatement for KS.

By the way, this aspect is very, very present in the whole of Shizune's route, for you people who think it doesn't have much as redeeming features and whatnot. The only thing that disappointed me was the ridiculous number of choices, really.


Emi: "Stay with me? Please?"
(...)
Hisao (narrating): No, she means exactly what she said. "Stay with me". Not "tonight" or "forever", because we both know there's no such thing as forever.

There's no time limit to the request, there's just the request.
(Emi's Act 4 - Hooray for Socks)

I don't think I really need to say much here. Iknohowyafeelbro. Well, except for the scene's title xD.

"Present" is a fleeting and vague concept at best.
The moment between the past and the future?
That doesn't really mean anything.
Thinking too much about things that don't make sense is a waste of time.
That's why living through the present is alwaysthe best option.
Besides, for us who can't foresee the future and who forget about the past too easily, present is really the only proof of our existence.
Even though existence will go on even if you forget about it for a while, it's good to seize the day at least every once in a while.

Tearjerker². And no odd scene titles to break the mood, either.

I'd also like very much to quote Rin's GIANT SPEECH BUBBLE here, and seriously would if it weren't for the sheer size of it (for those who want to see it anyways, the scene is Dandelions in Act 2). I actually read the whole thing in my first playthrough! Obviously, smiling all the way. Predictable Rin in her unpredictability. Or maybe it's the other way around.

Also, this is not really a quote, but note how the drawing for Rin's Act 4 is her standing on a water surface~.
...shame on you if you don't get it. Go replay Rin's route. NOW.

"I had no idea what it really meant to change but I know now that you had no idea what I've had to do and all these things that pass through and I think I really don't they just build up inside and grow and grow and grow until they flow out like a flow of everything that has ever been wrong I can't take it I can't think of the things I want because there's only so many things I can think four six seven doesn't matter it's never enough I have to let this out destroy forget it and nothing else -"
Rin.
Rin/Shizune > Lilly > Hanako > Emi.
Top My favourite quote is in Lilly's path, when Akira mentions Hisao being lucky for seeing both her sister and Hanako in their pajamas.

Ah, this could be bad. I know Hanako's altogether too innocent to bother reading too much into such a thing, but the expression Akira directs at me is positively stormy."
Top

"You are a really kind person, even when you're not. It's the most scariest thing ever. I think... that all I was ever afraid of is your kindness." - Rin, "Proof of Existence"
Been a KS fan since late 2010, and am grateful for all the devs do! You guys rock!

Honeymuffin wrote:My favourite quote is in Lilly's path, when Akira mentions Hisao being lucky for seeing both her sister and Hanako in their pajamas.

Ah, this could be bad. I know Hanako's altogether too innocent to bother reading too much into such a thing, but the expression Akira directs at me is positively stormy."

Ah yes, that was a good one, and the look Akira gave Hisao was damning, lol
Top

Another good one from my first Emi playhtrough just now, when she's revealing her plans for she and Hisao running together each morning:

"Hisao's inner monologue: My god, Kenji! If you could only see the scheme unfolding!"

If he'd been there it would have been a rageface moment for sure.
Top

"I know there's supposed to be a system for categorizing these books, but I don't see how anyone can decipher it without spending half of their life researching it. That's probably why all the librarians I know are neurotic."
Top

Hanako: "But I want to staaaay with you and Lillyyyy."
I love this quote for some reason.
In someone who's always so shy and reserved, it's refreshing and stunning to see this surprisingly emotional quote.
It also helps that her route is my favorite.