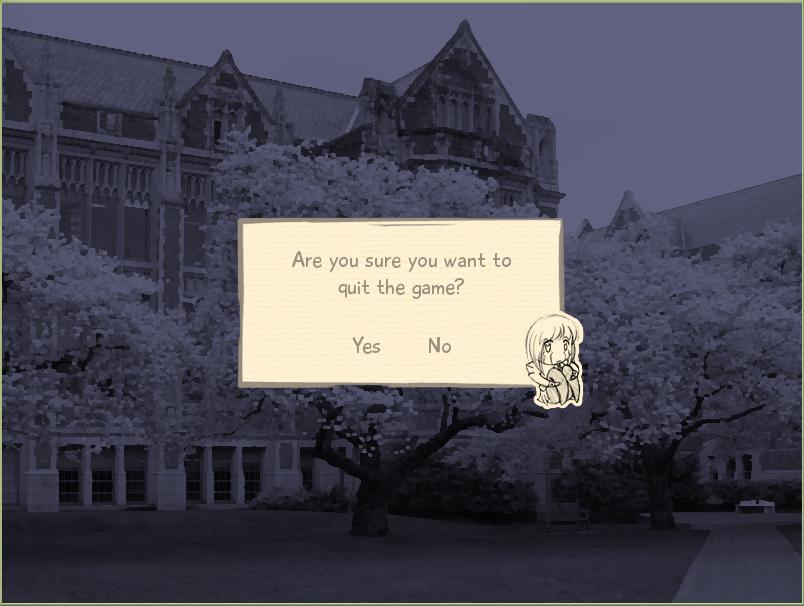 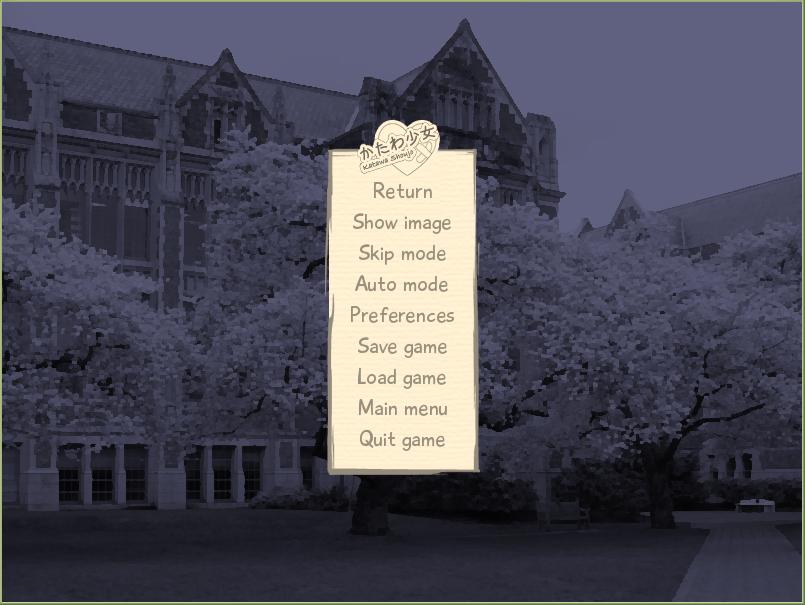 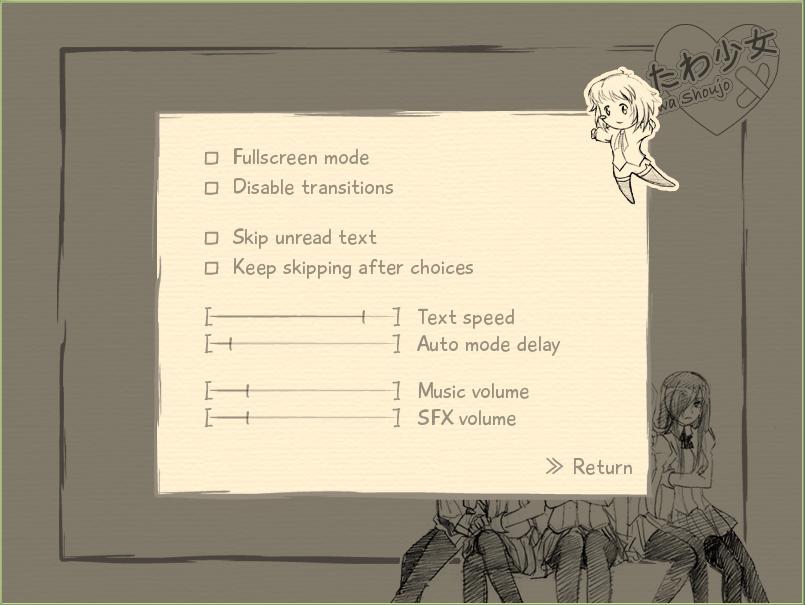 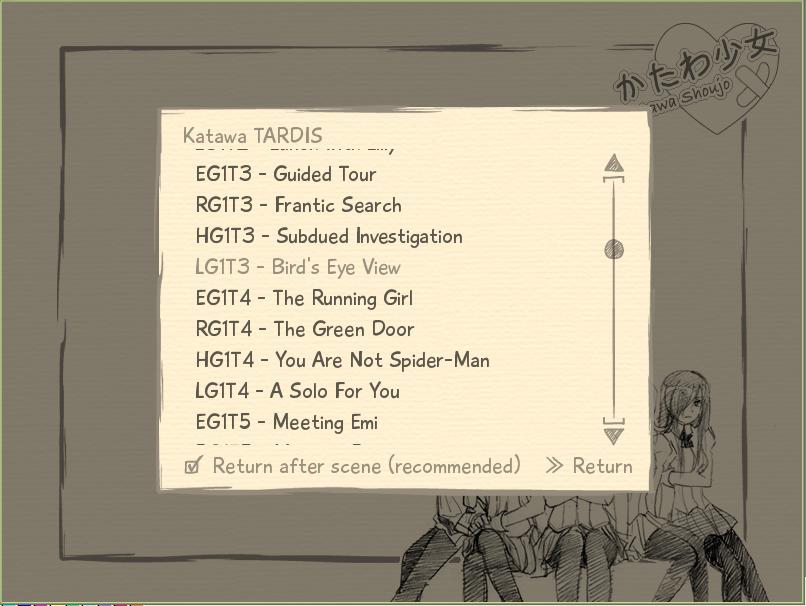 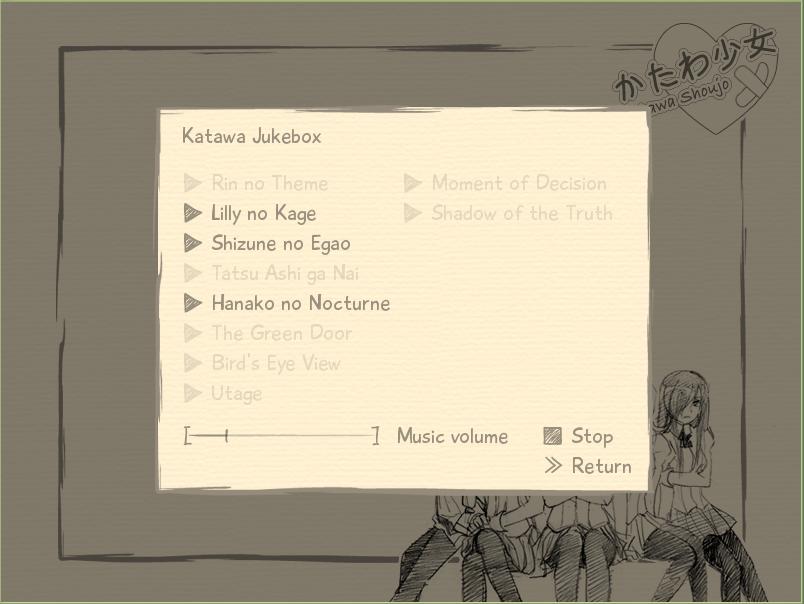 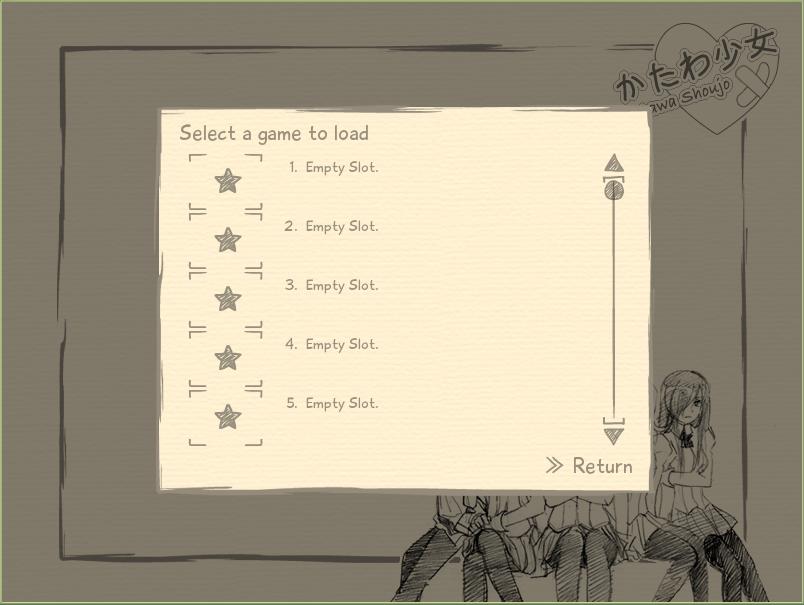 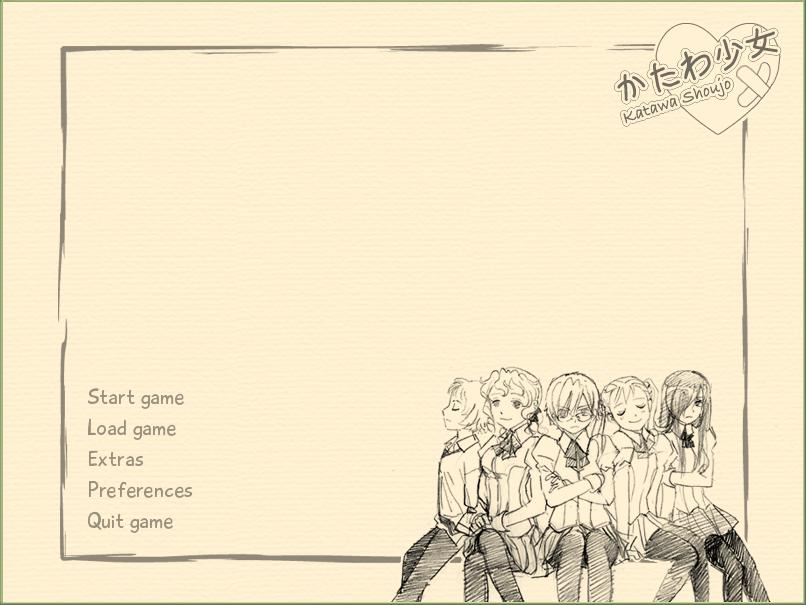 This is highly awesome.
Though, I think that there needs to be at least a tinge of colour. Maybe.

Also, is it possible to design a sketchy font + logo to match the theme?
Top

I like what I see. the art needs to be changed, but other than that, everything seems great.
Top

Agree with Syu, although you didn't post the most controversial element of UI, the text box.
<Aura> would you squeeze a warm PVC bottle between your thighs and call it "manaka-chan"
<Suriko> I would do it if it wouldn't be so hard to explain to my parents
Top

The textbox issue is prettymuch solved, and the art should be changed.

I think it should have some more colour.
Top

I really love the style of the UI, but it really does need color.

What I don't like is just nitpicking:
- The first chibi character is hard to make out.
- For the Scene Select menu, I think the scene designator ID should be taken out. It makes no sense to anyone who's just casually playing the game.
- And for the backround with all the girls, shouldn't those who are friends be put together? Lilly with Hanako, Rin and Emi, etc. Though...That does put Shizune in the middle by herself...
Emi> Lilly is a grizzly bear
<Sessha> THAT'S NOT A FRIENDLY CREATURE OF THE SEA
<climatic> FUCK YEAH UNDERWATER BEAR
<Emi> OH YES IT IS SO. EVER HEARD OF BEARS IN A SUBMARINE?
<Sessha> DAMMIT YOU GUYS
Top

I personally like the "paper" color scheme we have going on right now. It works very well for a story set in a school.
Ren'Py Creator - KS Forum Host
Top

*saves*
I'm with Tom.
The paper looks not only good, but actually authentic. As in commercial quality.
Oh, how you've grown, Kata-chan!

<@Delta_Kurshiva> KS-tan would have like five heads and one arm.
My Novel - Now available The Zemlya Conspiracy
Blog: http://cplcrud.WordPress.com

In before a moe anthropomorphication of this god damn project.
<Aura> would you squeeze a warm PVC bottle between your thighs and call it "manaka-chan"
<Suriko> I would do it if it wouldn't be so hard to explain to my parents
Top

And ten mouths. And half a brain, total. And...

Looks fine, has a drawing book feel to it.
Top

The more I read into the forum and the production progress reports, the more I am utterly awed by you guys, and the work you have done Major kudos just does not begin to describe. Keep up the great work, guys.
Top

so far so good! don't really i want to change about it.
Top
Post Reply
17 posts