Aura wrote:The focusless look of an actual blind is hard to portray in anime art because anime characters always have a vague, soulless look in their eyes. Eyes that look like they have cataract is a rather widely used visual shorthand for "blind person here" in all kinds of media (even when technically incorrect). Here are some real blind kids: http://img46.imageshack.us/img46/182/blinds.gif

I might be stating the obvious here, but another reason to use a cataract-like effect is that the alternative - drawing the eyes like the kids in that picture's are - can't translate into animation as anything but comedy. I'm thinking of the bird from Toradora here (not blind, just disturbingly googly-eyed). Whether that perception is right or wrong doesn't really matter, because that reaction is pretty much unavoidable from the average person.

tl;dr Realistically unfocused eyes are not moe. Lack of sparklies on eyes is still moe.
"I don't care," said Pierre, "I'm from France."

...I don't see it. Care to compare the sprites?
Top 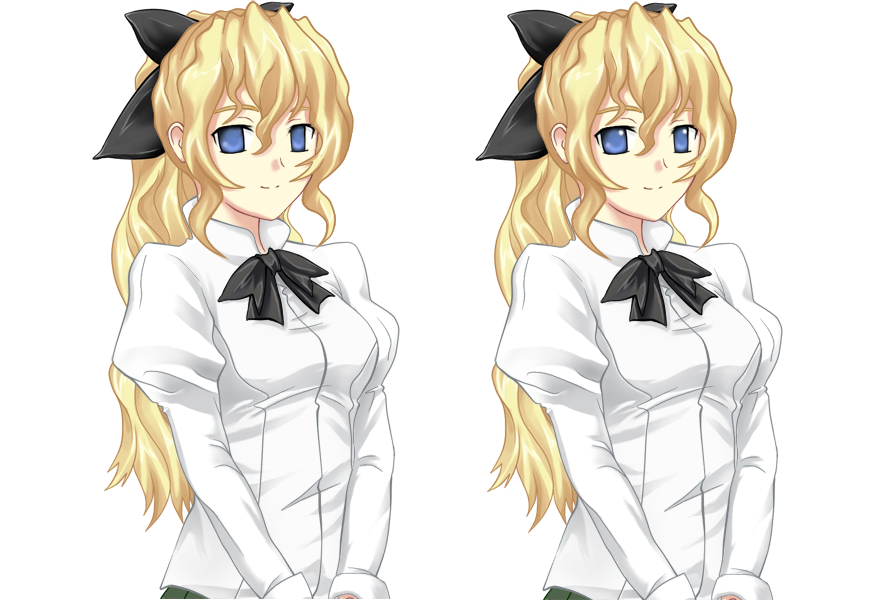 I guess the solid blue oval is less obvious with the sparklies. I mean I knew it was there before, but I just kinda forgot about it and when thinking about what they did to make her eyes look "deader" I immediately assumed the solid oval had something to do with it.

Either way I think her eyes could be improved while still looking "dead" if the oval didn't stick out as a solid color.

I have to say, Lilly never really looked blind before, but the faux-cataracts fixed that very nicely. Rather ingenious, really.
Top

Thanks for the info on Lilly, guys. Glad to know she got something new in v3 too, even if it's minor.
Top 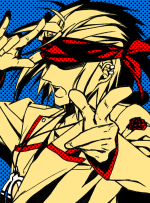 I noticed very subtle but really nice touch ups, congrats on the version 3 guys, keep up the good work~!
Hurry up, you can still make it!
Oohh~ Run to her and hug her tightly!
Top

Before I go into my discussion on what I think of the new Emi sprites, I'd just like to add that this is just my opinion and I recognise that. It's not me demanding the devs fit it to my specifications, it's just honest feedback.

First off, the new CG (here; it's a bit too large to just post)
Overall I understand the new direction with the different colour blade cups and the bandages, but I preferred it the other way. It just seemed more natural for them to be flesh coloured, making them purple makes them look at lot more plastic to me. That's really just pettiness, though. The thing that really bugs me about the new CG is the expression. Something about the eyebrows mixed with the smile makes it seem a little... I guess sarcastic? As long as we're on the CG, note the length of the bloomers.

Next, the puppy dog eyes sprite.

This is one of my least favourite sprites. I think it's the darkening around the eyes, but in this sprite I always think Emi is wearing too much eyeshadow or something, and it makes it less "adorable pouting puppy" and more "sulky tart", which doesn't really seem to fit the character as much.

Moving on, the blushing sprite

This one's adorable, and one of the best displays of what I like about the new sprite design. However, notice the bloomer length. It's a bit of an odd complaint, but they seem to have gotten a lot more like underwear since the last version, and even since the CG.

It's been mentioned before, but the eyebrows look a bit sketchy and out of the style.

This is my second favourite sprite of her new set, it's adorable.

The blush looks a little odd and there's the eyebrows thing, but otherwise nice.

This is my favourite of the new sprites. I really think it's adorable.

So overall I really like the redesign, it's just a couple of the sprites that sort of bug me.

The sketchiness is pretty jarring in those winking/closed eye sprites, especially in close ups, but overall it's a decent sprite set.

This is one of my least favourite sprites. I think it's the darkening around the eyes, but in this sprite I always think Emi is wearing too much eyeshadow or something, and it makes it less "adorable pouting puppy" and more "sulky tart", which doesn't really seem to fit the character as much.

I actually love that sprite and it's my personal favorite out of the ones you posted. I'm more inclined to play v3 now. Also for the rest of your post the word you were looking for was "eyelashes," not "eyebrows."

Best sprite of Emi in my opinion, makes me want to actually like her.
Hanako Lover
Top

By eye brow don't you rather mean eye lash?
Aren't eye brows above the eyes (which IMO looks here totally normal) and eye lashes are really really close to the eyes, actually surrounding it (which here looks sketchy)?
The Piano and a change

I agree, it is definitely an improvement to the previous sprite set, it makes her look much more mature and her expressions more pronounced (except for the puppy-eye expression), but the sketchiness slightly mars the whole thing on a reality point of view. But could this be some kind of reference/nod to Riata's original drawing style?
"If Hisao took one thing away from his time at Yamaku it was the fact that people who have handicaps don't actually have handicaps. People like Lilly and Shizune are more able-bodied and well-adjusted than most of the kids at Hisao's old high school. He shook his head slightly. No, students at Yamaku weren't handicapped; everyone else was." - WetCrate
Top
Post Reply
106 posts